Although NASA says 2010 is tied for the warmest year on record, Americans are less concerned about climate change today than they were just a few years ago, according to a new poll. The difference in opinion along political lines is greater than ever.

In its annual Environment poll, Gallup found that 51 of Americans worry a fair amount or great deal about global warming, just one percentage point higher than the poll's lowest mark in 1997. Three years ago, 66 percent expressed worry.

Forty-three percent of Americans see media coverage of climate change as exaggerated, while 29 percent believe it is underestimated, and another 26 percent say it's about right. In previous years, respondents were evenly split between the three perspectives, according to Gallup.

The heated political debate over clean energy policies in Congress illustrate how politicized the issue (see chart below). The same divide is reflected in the Gallup poll, which shows 71 percent of Democrats feel human activities are fueling the rise in the Earth's temperature, compared to 36 percent of Republicans and 51 percent of Independents. 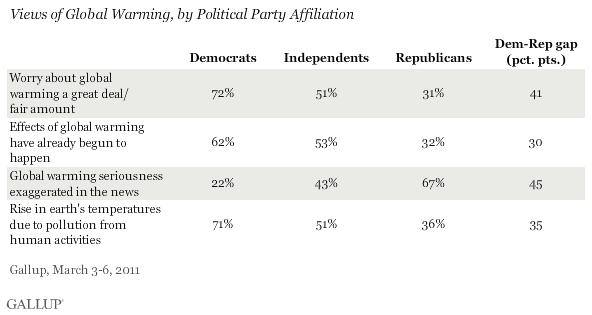 In addition to controversies over climate change data and analysis, Gallup offered some other potential reasons behind the general decline in concern about climate change