Anheuser-Busch announced that it is on track to meet its 100 percent renewable energy by 2021 goal four years ahead of schedule, following the closing of a power purchase agreement (PPA) for a 222-megawatt solar project in Pecos County, Texas. The single deal is enough to cover 50 percent of the electricity consumption of the company’s U.S. operations.

In honor of the achievement, Anheuser-Busch president and CEO Michel Doukeris signed a giant, symbolic contract with the sun for 5 billion years — the projected amount of time until the sun burns out — at the Budweiser brewery in Fairfield, California. The contract was burned into a giant piece of wood using heliography, a technique that uses the actual power of the sun. 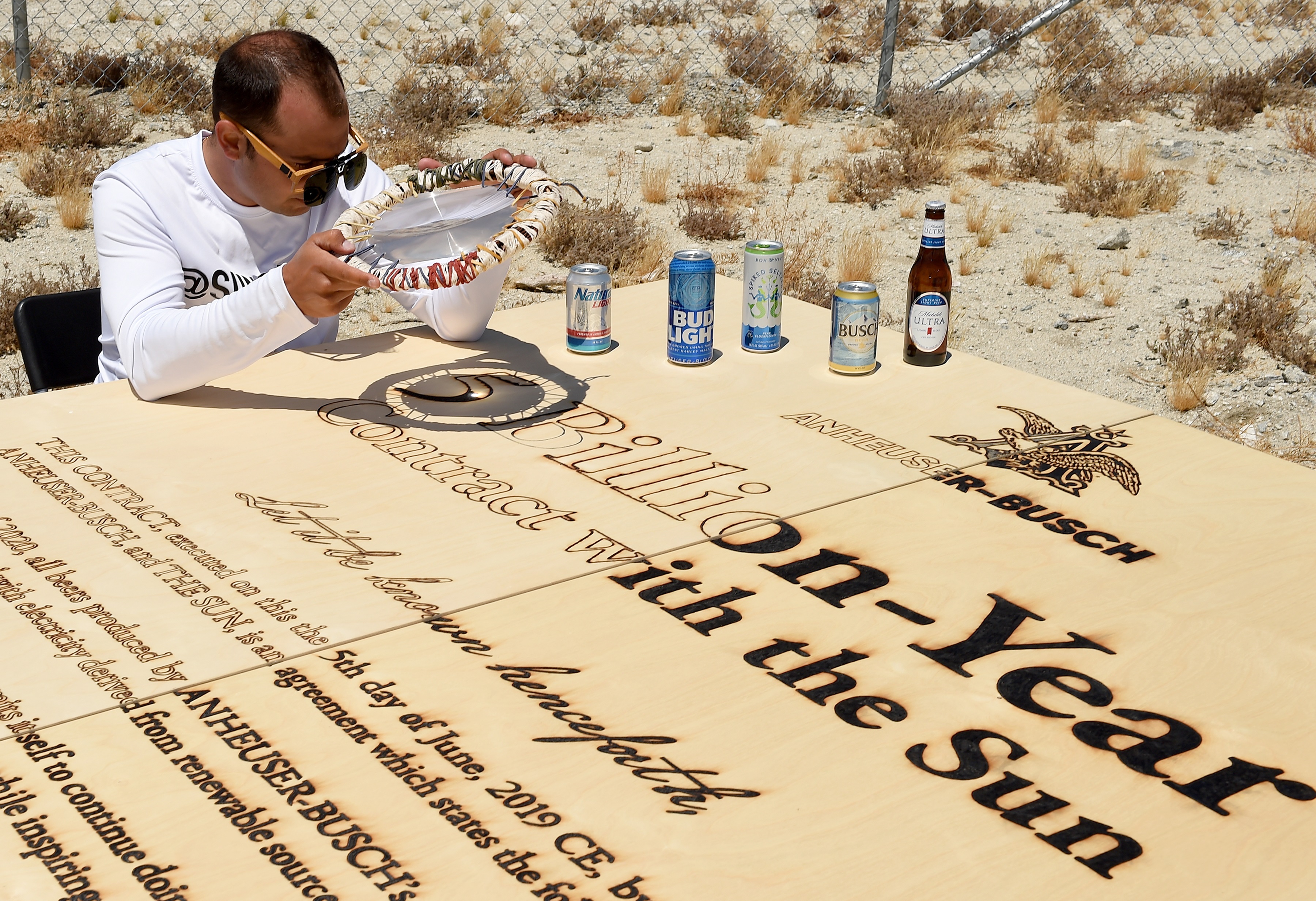 Anheuser-Busch — parent company of Budweiser, Michelob, Stella Artois and Corona, among others — announced a 100 percent renewables commitment in 2017. At the time of the pledge, the company acquired about 7 percent of its electricity from renewable sources. Last year, the brewer debuted its 2025 sustainability goals for the United States, which included a 100 percent renewable energy target and a 25 percent reduction of carbon dioxide emissions across its operations.

Anheuser-Busch’s ability to achieve its renewable energy goal in just half the time anticipated reflects the lightning-fast maturation of the corporate renewables market.

"We went through this process of, ‘Can we even do this?’" Angie Slaughter, vice president of sustainability at AB InBev, Anheuser-Busch’s U.S. operations, said in an interview with GreenBiz. "This is very much in our corporate culture to simply dream big and then go after it. You may not get there but come close, you still move an enormous amount."

In the last decade, the renewable energy procurement market has grown exponentially as the cost of technology dropped, policy incentives (such as tax credits) make the economics more favorable, and companies step up clean energy commitments. In 2018, corporate renewable procurements reached more than 6.5 gigawatts, up from 1.2 gigawatts in 2014.

This is very much in our corporate culture to simply dream big and then go after it. You may not get there but come close, you still move an enormous amount.

AB InBev isn’t the only company to hit renewable targets early. In May, LEGO Group announced it had reached its goal of 100 percent renewables three years ahead of schedule. Google (PDF) committed to using 100 percent renewables in 2012 and achieved that goal in 2017 — a timeline faster than expected by Google’s internal team, although a target date was not formally set.

In other words: Companies might be able to move faster than they think — if they think creatively about solutions.

"You can push fast," said Neha Palmer, head of energy strategy at Google, in a recent conversation with GreenBiz. "Many of the barriers are how to structure [clean energy deals] in a way that makes a company comfortable."

In the few years AB InBev has explored renewable energy procurement options, Slaughter said has noticed how the market has grown to include more transaction structures.

"We had many different iterations and offers," noted Slaughter, who said her team spoke to 100 suppliers and project developers before landing on Recurrent Energy as a partner for the new deal. "The options are continuously morphing as the suppliers are getting more creative in what they can offer and ways they can share risk."

Support for Anheuser-Busch’s sustainability goals came from the top down, with buy-in from the CEO from the beginning, Slaughter said.

While that helps, the business case for renewables is clear, she said. Unsubsidized renewables are beating dirty energy generation on a levelized cost basis.

"When you look at the long-term deals, you have to take a forward view of what is going to happen in the market and what will happen with inflation and utility cost in the future," Slaughter said. "Taking all of that into consideration, minimizing risk and then doing what’s right for the business and right for the planet makes perfect sense from a business perspective."

Beer is a surprisingly energy-intensive. As of 2013, a barrel of beer consumed between 47 and 69 kilowatt-hours (PDF), meaning the amount of energy needed to brew, bottle and distribute 7.5 kegs (15 barrels) of beer is about equal to the electricity use of an average U.S. household per month.

For breweries, energy consumption is a major line item. And embracing clean energy is in line with many breweries’ brands.

"Brewing is a manufacturing industry, and as such, can be fairly energy intensive," said Bart Watson, chief economist of the Brewers Association, in an email. "Finding ways to reduce energy costs just makes good business sense."

While the Anheuser-Busch PPA is the largest from a beer company, it is not the only major beer brand to embrace renewables.

While the Anheuser-Busch PPA is the largest from a beer company, it is not the only major beer brand to embrace renewables.

Heineken launched a Brewed By The Sun campaign in 2016 and has a commitment to use 70 percent renewables by 2030. Other honorable mentions include Deschutes Brewery, MillerCoors and Lagunitas, among the leader breweries using clean energy in 2017.

Slaughter also sites climate as a pressing issue for the beer industry.

"Our product is made from natural resources," she said. "[Climate change] certainly is an area of focus because we know and understand that in order to keep making great beers, we need to have a long-term sustainable supply chain of these critical ingredients."