Instrumental in designing more humane practices for McDonald's, the Colorado State university professor chats about the promise of regenerative agriculture and the state of sustainability in slaughterhouses.

Animal behaviorist Temple Grandin designed the humane handling systems used at half the cattle-processing facilities in the United States. An autistic person, she is often described as the voice for those who are sometimes challenged to be heard.

Grandin’s in-the-field research on the welfare of cattle and pigs spans close to five decades and has earned her numerous accolades, including recognition as a Time person of the year in 2010 and an HBO biopic with actress Claire Danes portraying her.

She is a prolific inventor: she dreamed up both the "squeeze box" (a calming device sometimes used by autistic people who crave touch; it "hugs" them) and a series of livestock handling devices, such as the center track restraint system.

But her engagement with McDonald’s — motivated to address the conditions at its slaughterhouses — really brought her work to the attention of the corporate sustainability movement.

I'm totally visual thinker. When you look at problems visually, you tend to look at them very simply. If you think about them in words, it sometimes gets extremely complicated.

An outspoken author and speaker on autism and animal welfare issues, the Colorado State University professor will be featured in a plenary session at GreenBiz 20, Feb. 4-6 in Phoenix. (If you can’t be there, hop on the livestream Feb. 5.)

GreenBiz Editorial Director Heather Clancy spoke with Grandin about the collaborative nature of creative problem solving, the promise of regenerative agriculture and the state of animal welfare. The interview was edited for clarity and length.

Heather Clancy: In your latest book, "Calling All Minds," you chronicle the complex process of innovation. Your thesis is that it takes a combination of thinkers to surface and deliver on breakthrough ideas. Why are visual thinkers so important as part of that process?

Temple Grandin: Well, visual thinkers are able to see ways to solve problems, because they can visualize it in their mind. They can also see risks. In engineering-type things, mathematicians tend to calculate risk. Visual thinkers can see it. And I think visual thinking is actually involved in common sense.

We talk about using common sense, but one of the problems today is that schools have taken out all the hands-on classes — art and sewing and woodworking and metalworking and mechanics. The other big problem we have is that visual thinkers can't pass algebra, but the thing is, you need visual thinkers.

I'm totally a visual thinker. When you look at problems visually, you tend to look at them very simply. If you think about them in words, it sometimes gets extremely complicated. 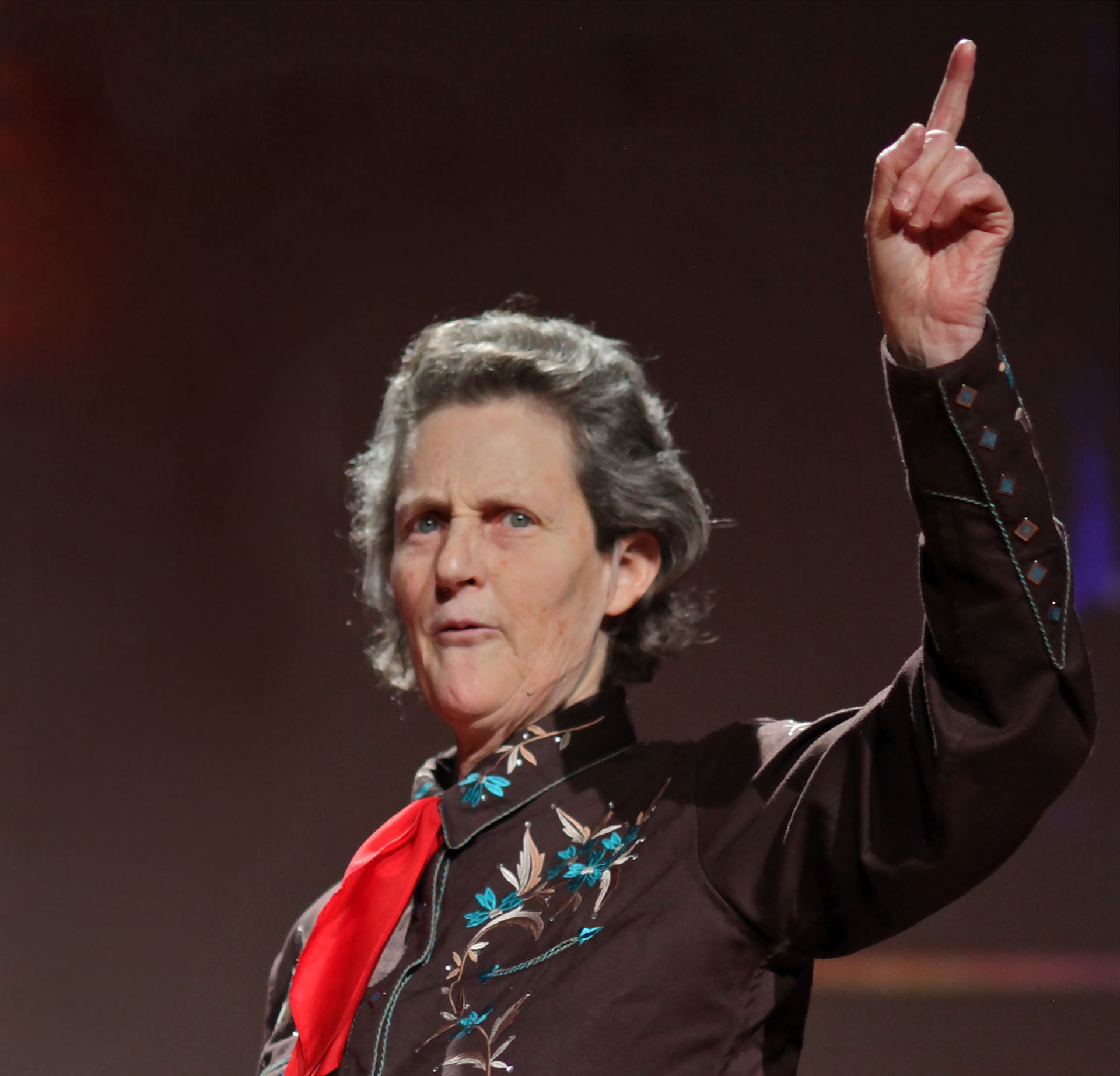 Clancy: But you need all the sorts of thinkers to come up with a solution?

Grandin: Well, yes, you do. Like for example, let's take the iPhone, for example. [Late Apple co-founder] Steve Jobs was an artist. He made an interface that was easy to use, but the engineers had to make the phone actually work. That's the different thinkers working together.

Clancy: You are a vocal proponent of trades where people use their hands. How can a large company better support the experiential education that we need for the development of these sorts of skills?

Grandin: In the meat industry and many other factories, there's a huge shortage of maintenance people … what I call the clever engineering department. That'd be things like elevators, and that would also be a lot of the specialized equipment in something like a poultry processing plant.

And the reason why we lost those skills is we took out the skilled trades in schools 25 years ago, and these kids are just getting shunted into special ed instead of inventing things like equipment or inventing ways to improve the environment for other things. We need all the different kinds of thinkers, and right now in the U.S., we've got a gigantic shortage of mechanics. These are good jobs that are not going to get replaced by computers. The people who'd better watch out are things like the internist doctor or the radiologist. They’re going to get replaced by a computer way before a mechanic to fix something is going to get replaced.

Clancy: You've been consulting with livestock companies for decades. These companies, these organizations have had to reteach some of these concepts, right?

Grandin: When I first started working on cattle handling equipment, one of the mistakes I made when I was in my 20s, and a lot of engineers make this mistake, is they think they can fix everything with technology. Well, I learned that technology doesn't replace management. It's just that simple.

One of the things I did that probably made the biggest difference was when I worked with McDonald's and Wendy's on implementing animal welfare systems at slaughter plants. We used a very, very simple assessment tool. We'd measure things like stunning efficacy on the first shot, falling down, cattle mooing and vocalizing during electric prod use.

The thing that you've got to figure out, it's what are the critical control points to measure. What's really important?

The thing that you've got to figure out, it's what are the critical control points to measure. What's really important? Now when I think about it, I see it. It's not abstract.

I'm using the same principle as traffic laws. Traffic laws work pretty well. Probably your three most important ones — drunken driving, speeding and running stop signs and red lights — and then I'd throw in texting and seat belts. Those would be the five critical control points. When you think about it visually, it's not abstract. It's very specific. That simple scoring system has been used around the world now, and it really does work.

The first thing that people need to understand is you do have different kinds of minds. And I talk about that in my book "The Autistic Brain." You've got the … visual thinker or object visualizer. Then you've got the more mathematical pattern thinker. These are going to be your computer programmers, your engineers, also musicians. Then you have people that are strictly word thinkers, and there are some people that think so much in words, they have no visual thinking at all. That kind of a person does exist, but they are rare.

Most people have a kind of a mixture of the different things. But the skills complement each other. We need our visual thinkers to prevent messes like the Boeing Max mess and Fukushima. These are problems I would have visualized — I would have seen water coming over the seawall and drowning the emergency cooling pump.

What I've learned about the mathematical mind is it doesn't see it. It calculates the risk. I can't design a nuclear power plant, but maybe I need to be working on its safety systems.

Clancy: Assess how far has the meat industry come on core animal welfare and humane issues.

Grandin: They've come a long way. I'm not going to say they're perfect, but I've been in this industry for 47 years, and in the '80s and the early '90s, the industry was just terrible. I'm not going to defend anything they did at that time.

And then the big food safety problem [emerged] in the early '90s, and McDonald's and other companies like that got all over that. Then in 1999, I was hired to train the food safety auditors to do the animal welfare audits. Within one year, I saw more change than I'd seen in my whole entire career.

And we didn't have to rebuild the plants. It was mostly simple things. Maintenance of equipment, non-slip flooring, adding lights and moving lights to control what animals were seeing — because they don't like walking into the dark — and training and supervision of people.

Out of 75 plants, only three had to build something expensive. I'm very proud of that. We made some older facilities work. 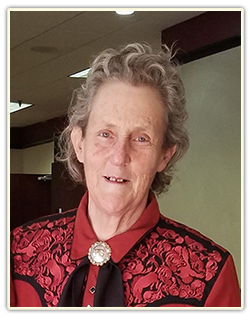 Clancy: The farming sector is talking a lot about regenerative agriculture, including practices like rotational grazing. What advice would you give to farmers that are incorporating more livestock into their operations about how to do so more humanely?

Grandin: Well, I would work at it slowly. Don't get in 1,000 cattle at one time. Work into it slowly. I am a big believer of regenerative agriculture. I've reviewed a lot of literature on this. In fact, right now, I'm updating my book "Improving Animal Welfare: A Practical Approach" for the chapter on sustainability. And we've got to go to crop rotation.

One of the rotations needs to be livestock grazing a cover crop. We also have got a lot of rangeland where you can't grow crops, and we need to be working on using it sustainably. And some family ranchers are already doing that.

But the animals are part of the land. Three years ago, we had a crop scientist come to our animal science department to talk to us, and I learned for the first time that the very best agricultural land in Iowa and Illinois was created by herds of grazing bison. The grazing animal made the best cropland we had. We've got to start integrating grazing animals back in with crops.

Clancy: You talk about the importance of stretching children's minds as an integral part of their journey to adulthood. Do you advocate the same sort of thing for adults?

Grandin: Well, yes. Now what you have to do like with autistic kids, they panic if they get — what I call, don't throw them in the deep end of the pool. There's a lot of things they need to work into it more gradually.

You see, now I see it. I see it. And then we've got the issue of the crop fields don't have any perimeter fences, and then you've got issues of the cattle getting on the highway, which is very bad results. But work into it slowly, so they learn it.

In looking at guidance on stuff like sustainability, I think in a lot of cases, it's easier to specify to someone in a supply chain what not to do.

Also, if a crop farmer and a rancher can team up, then the crop farmer doesn't have to deal with the cattle. You see, those would be opportunities for partnerships. But right now, both in the U.S. and in Europe, you have subsidies that motivate the wrong behavior. And what's a farmer going to do?

You see, it's important to have economic incentives. When I worked with McDonald's and Wendy's on animal welfare, the economic incentive was if the plant didn't get fixed, they would be kicked off the approved supplier list. That was a huge motivator. And the other thing that was good is the scoring system was extremely objective. Right up front, the manager of that plant knew what they had to do. It was not vague. It didn't have things in there like handle cattle calmly. What does that mean? Or handle cattle properly. I don't know what that means.

If you had more than 1 percent of the animals fall down, or 3 percent of the cattle bellowing when you were handling them, you failed the audit. And it was like traffic rules, really objective.

Also, in animal welfare, we've got seven acts of abuse that you never do, the automatic failure of an audit if you did things like dragging animals around when they're conscious. You do that, you're going to fail the audit. It's very clear.