Large corporations, universities and municipalities are increasingly interested in procuring renewable energy at scale due to a combination of increasingly ambitious sustainability targets and falling costs. Buyers must consider more than just the cost of energy when evaluating these transactions, but the opacity and complexity of wholesale energy markets makes this analysis challenging. To address this market challenge, Rocky Mountain Institute’s Business Renewables Center (BRC) is launching a software platform that combines recent market data with regional cost models to help potential buyers and others understand where wind and solar projects are more likely to be economically attractive.

Over the last several years, interest in renewable energy contracts from nonutility buyers has grown tremendously. According to the BRC’s Deal Tracker, large companies alone have been responsible for adding more than 7.5 gigawatts (GW) of renewable energy to the North American grid each year since 2014. (In 2015, there was a heavy spike in corporate procurement due to widespread concern that the Federal Production Tax Credit would expire at the end of that year, which accelerated many transactions that otherwise would have been announced in 2016.) Meanwhile, since 2008, large universities have purchased nearly 1 GW of renewables. 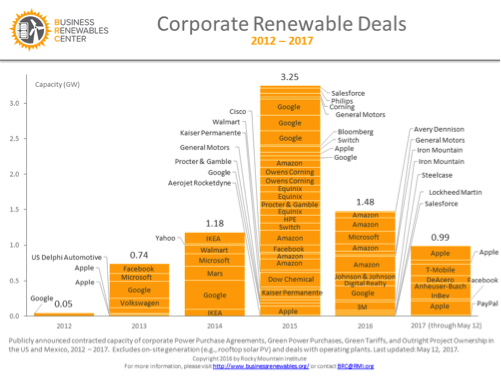 This growth has been driven by two important trends:

These trends have particularly driven interest in off-site transactions. On-site wind or solar installations frequently are constrained by lack of available space; meanwhile, larger-scale, off-site installations allow buyers to make significant progress toward their goals while also benefiting from such installations’ economies of scale.

Nobody said it would be easy

The cost of energy is only part of the equation, however, and these deals are far from simple. The most common type of contract is a virtual (or "synthetic") power purchase agreement (PPA). While complicated, these contracts are popular in part because they do not impact the buyer’s preexisting arrangement to buy power from the local utility. Instead, the buyer agrees to buy energy from a new wind or solar farm at a fixed price and, in exchange, receive the revenue generated from selling that energy into the wholesale market as well as the associated renewable energy certificates. (These contracts are also known as "fixed-for-floating swaps," because the buyer is promising to pay a fixed price and, in return, receive the floating market price.) Because of this tradeoff, it is critical that the buyers evaluate the relationships between the fixed costs they will pay and the floating market prices they will receive.

Here is an example of how this works: Consider two hypothetical renewable energy plants. Wind Farm 1 is in a low-cost region of the country and offers to sell its energy to a buyer for $20/megawatt-hour (MWh). Meanwhile Wind Farm 2 is only able to sell its power for $30/MWh. Which is a better deal for the buyer? To answer this question, these costs must be compared with the floating, market-based revenues that the buyer will receive. If these revenues prove to be lower for Wind Farm 1 — say, $18/MWh, while Wind Farm B was able to earn $34/MWh, respectively — the higher cost project actually would provide a better deal for a buyer, despite its higher fixed price. 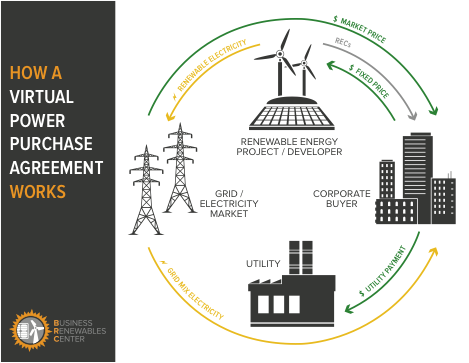 As illustrated above, it is critical for potential buyers to understand both their expected costs and expected revenues when deciding where and whether to sign a deal.

This is easier said than done, however. Energy prices vary by location based on local supply and demand, and local prices can vary significantly throughout a year or even within a single day. Also, wind and solar plants’ hourly output can fluctuate based on the time of year and the hour of the day. To start to estimate a plant’s revenues, therefore, requires pairing expected hourly generation throughout an entire year with the wholesale prices at those hours.

Bringing transparency to the market

BRC has created a tool to simplify this economic value calculation. The goal is to bring additional transparency to the market, and help buyers make informed decisions by providing insights into where wind and solar projects are more likely to be economic.

The BRC’s software platform allows users to quickly evaluate hypothetical wind or solar projects at more than 4,000 locations across the country by estimating both the fixed costs that a buyer might expect to pay, and the floating market prices a buyer could expect to receive — all based on real market data. Users can explore a variety of scenarios and contrast the opportunities across large regions or zoom in to see granular results. In creating these estimates, the analysis considers:

Our analysis affirms that renewables can be an economically sound investment for corporates, but that buyers should be careful in their selection process and fully understand the potential risks. With prudent investments, companies, universities and municipalities have the potential to use their purchasing power to drive real change in the U.S. generation fleet.