Two very different titans in consumer electronics are aiming to advance the circular economy in their own ways.

Extending the time consumers spend using their electronics is maybe the lowest-hanging piece of fruit when it comes to advancing circularity. After all, the longer someone holds on to a laptop or smartphone, the longer its "molecules are kept in play."

Both electronics giants Apple and Best Buy have begun to make strides in that direction — despite imperfect product designs, supply chains and upgrade options — by making it easier for their customers to fix or take back busted or obsolete items.

"We really want those products to stay in use as long as possible, and this extends to our repair business," Alexis Ludwig-Vogen, Best Buy's director of corporate responsibility and sustainability, said at GreenBiz's inaugural circular economy event, Circularity 19, in Minneapolis.

As the two companies detailed progress toward circularity and sustainability on the Wednesday mainstage, they also announced a partnership enabling consumers to bring Apple products to Best Buy stores for Apple-certified repairs — expanding the options for consumers beyond Apple's 272 glossy storefronts and into Best Buy's 1,022 stores.

That's just one small example of companies teaming up to help further shared sustainability goals, not to mention their own bottom lines. But there's more to the picture. Here's a glimpse of how visions of circularity by Best Buy and Apple differ, and what else they're working on. 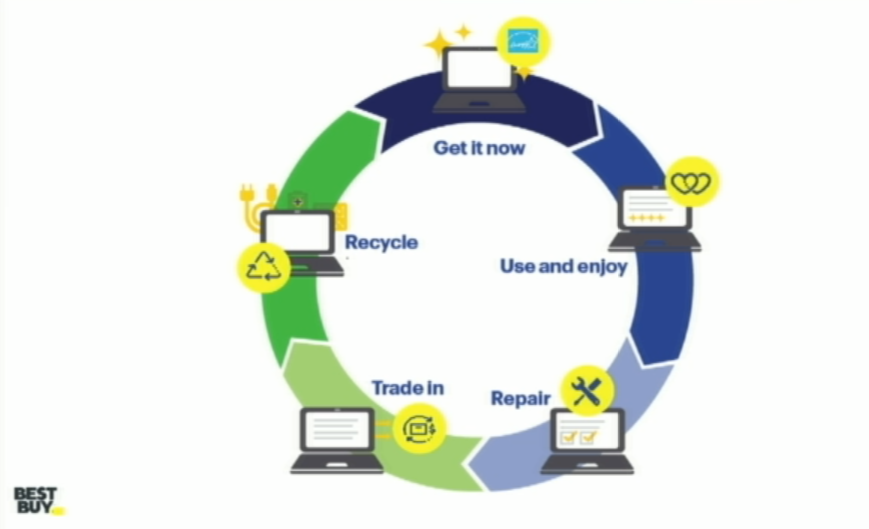 For Best Buy, circularity means that an electronic purchase that starts at the point of checkout can come full circle when the customer is done with the device. A gadget moves from the point of purchase through consumer usage and into repair, trade-in or recycling. The company itself is not in the business of producing goods, but it can move toward circularity by responsibly managing the flow of goods through its doors and online portal, as well as by nudging and supporting both suppliers and consumers in that direction.

Ludwig-Vogen noted that Best Buy's electronics takeback program has mushroomed from in-store parking lot events in 2009 into a complex logistics operation spanning all of its retail sites. Its 20,000 Geek Squad tech-support representatives, who repair 5 million items a year, also collect electronics from clients' homes. All in all, the retailer has collected 2 billion pounds of old PCs, cables, TVs and other electronics of recycling, possibly more than any other organization in the United States.

In its other sustainability news Wednesday, Best Buy committed to science-based targets to reduce its carbon emissions by 75 percent by 2030 through the expansion of its energy efficiency and LED lighting programs, investments in renewables and the addition of a hybrid vehicle fleet. The company seeks to achieve carbon neutrality by 2050.

The retailer also wants to reduce carbon emissions for customers by 20 percent by 2030 over 2017 levels, while saving them $5 billion in utility bills — largely by pushing its Energy Star-labeled items. 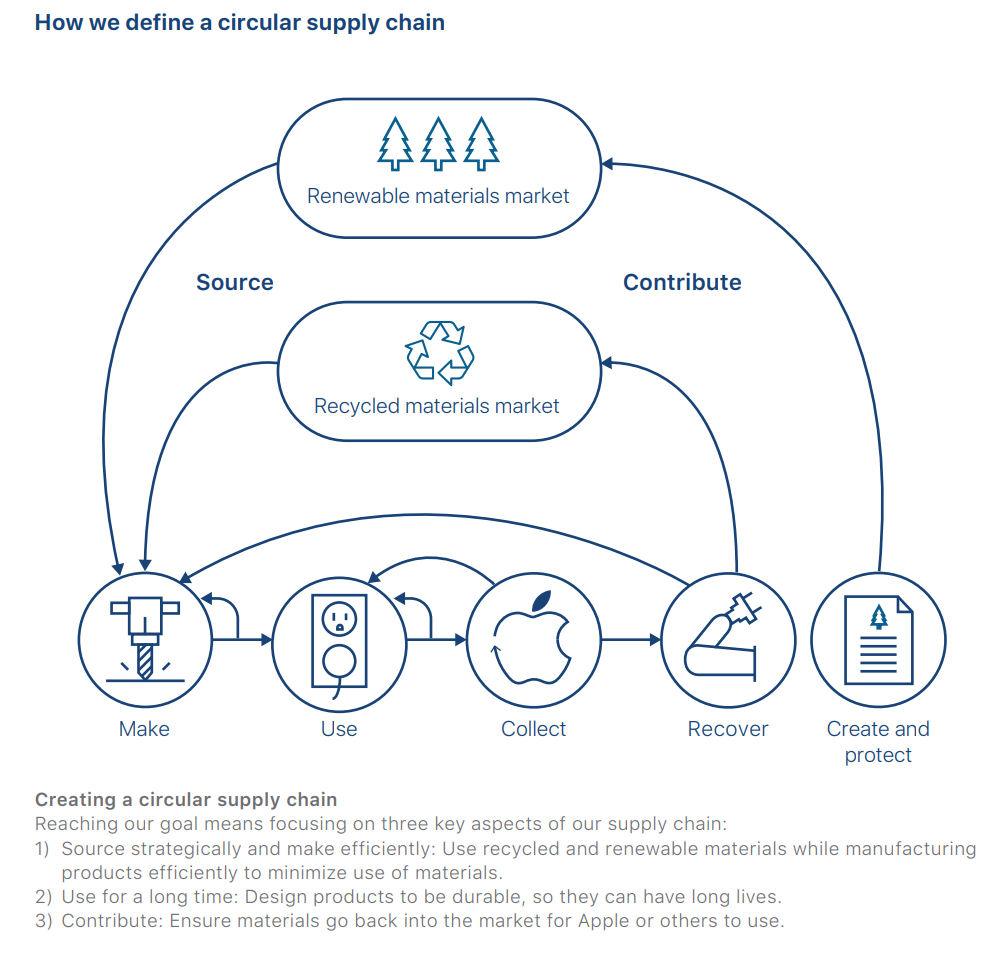 As equal parts designer, manufacturer and retailer, Apple's vision of circularity encompasses processes as diverse as dismantling iPhones via the Daisy robot, all the way back to ethically sourcing the raw materials for motherboards, touchscreens and packaging.

Apple's radical goal — announced in 2017 — to eliminate its use of mining in favor of recycled and renewable materials has made notable progress, as its 2019 Environmental Responsibility Report details. The company has been working on a menu of 13 materials from aluminum to cobalt to plastic to zinc. Often, the work involves designing pathways where none exist. For example, markets for recycled tin are robust, but not for rare earth elements. The company uses recycled tin solder in logic boards in 11 products.

"We have to go material by material and close those loops," Apple's senior director of operations and environmental initiatives, Sarah Chandler, said. "We want to make but not take. ... Our ambition to end mining is as big as anything we've undertaken at Apple, and it's inspired some of our most innovative solutions."

For instance, to use fully recycled aluminum — introduced last fall in the casing of its MacBook Air and Mac mini computers — Apple had to create its own alloy.

"I’ve heard more times than I care to count that making every one of the thousands of components in every Apple device out of recycled materials is impossible," Chandler said.

I’ve heard more times than I care to count that making every one of the thousands of components in every Apple device out of recycled materials is impossible.

Yet Apple's history is dotted with seemingly magical innovations, and part of its reputational mystique arises from its tight-lipped relationship with the public. (Apple didn't broadcast that it was making a "Jesus phone" ahead of Steve Job's first iPhone unveiling in 2007.)

However, the company's sustainability goals have been a different story, especially after former EPA chief Lisa Jackson began to lead its environmental efforts in 2013. Apple consistently has set a stake in the ground with commitments, as if summoning others to follow while daring doubters to eat their words. Apple announced in 2016 that it would use 100-percent renewables, which it achieved in 2018. So far, 44 percent of its suppliers have committed to clean energy, and Apple says it's on track by next year to produce or procure 4 gigawatts of clean energy in its supply chain.

Needless to say, each time Apple meets a new target toward circularity, it sends an industry beacon that a transformation toward a circular economy isn't so impossible, after all.