Confusion among terms like bioplastics, bio-based and biodegradable plastics makes it hard to discern and make the environmentally responsible choice.

Have you ever stood in front of a supermarket shelf and wondered if you should buy that product made from bioplastics rather than the conventional kind? Many people assume all bioplastics are made from plants and can break down completely in the environment. But that’s not the case.

"There are a lot of bioplastics or materials that are called bioplastics that are not biodegradable," says Constance Ißbrücker, head of environmental affairs at the industry association European Bioplastics.

For some plastics, the same polymer chains can be made from renewable sources. The resulting bioplastics are chemically identical to their fossil counterparts. PET, for example — short for polyethylene terephthalate,  the stuff most bottles are made of — can be synthesized from fossil fuel products or plants such as sugar cane. The resulting material is the same. Such non-biodegradable bioplastics behave in the environment just like conventional plastic and persist for an unknown but long amount of time.

Not only that, but no standards for plastics labeled as biodegradable or compostable today makes them suitable for disposal in the open environment. Given that, can bioplastics play a role in tackling environmental problems? Or are they merely greenwashing? The most accurate answer is, it depends.

Take polylactic acid (PLA), for example. This bioplastic is used to make shopping bags, transparent cups, 3-D printing material and other products. Because it can be derived from plant material such as corn sugar, potato or sugar cane, it can reduce the demand for fossil fuels used to make conventional plastics.

PLA is recyclable, biodegradable and compostable. But that doesn’t mean the ocean — or any other natural environment — easily can handle it.

To Frederik Wurm, a chemist at the Max Planck Institute for Polymer Research (MPIP), drinking straws made from PLA are "the perfect example for greenwashing." They are more expensive than other plastic drinking straws, but don’t readily biodegrade on a beach or in the sea. 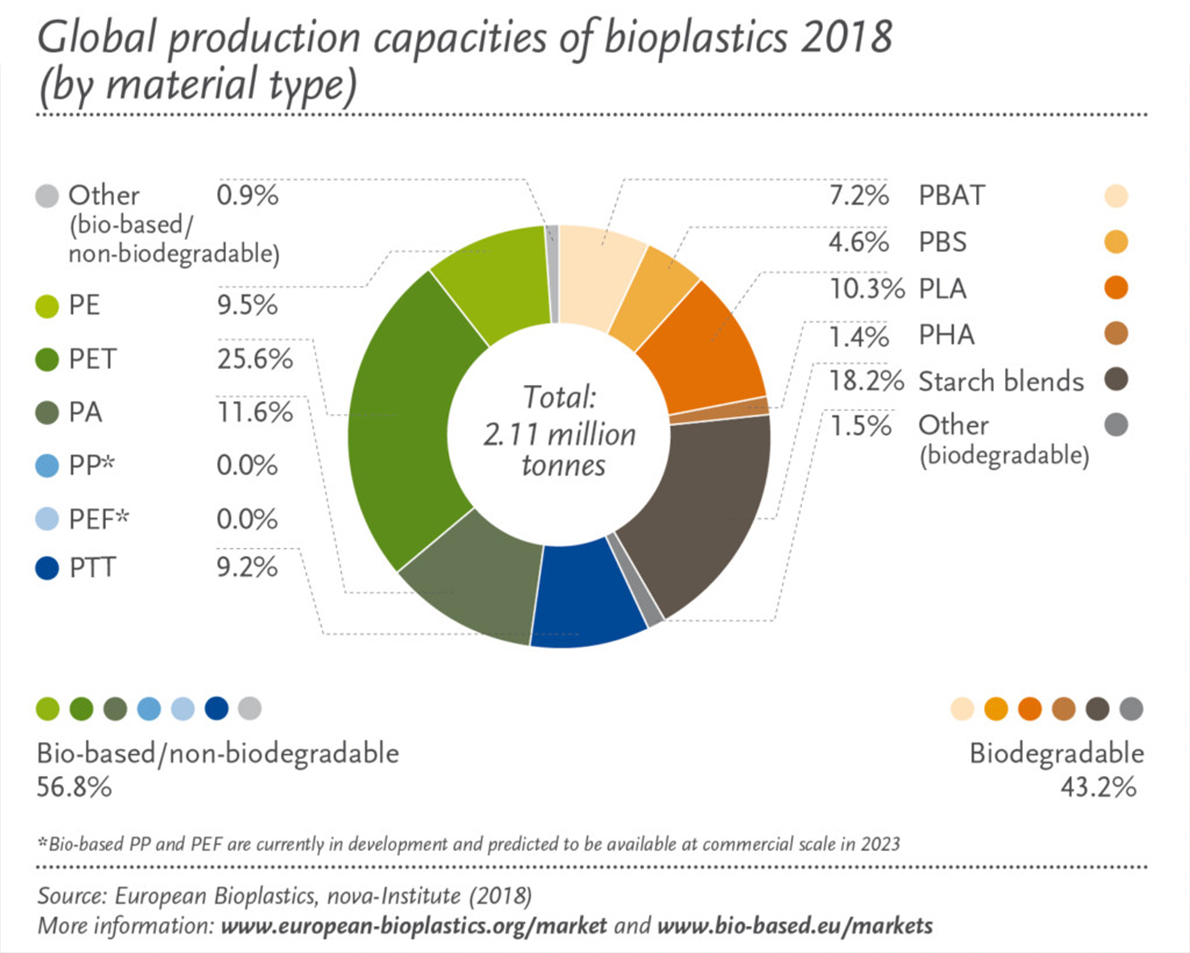 "You put it on the package [that it] is biodegradable, but at the point where these materials are . . . fear[ed] to end up, they will not biodegrade," Wurm says.

For biodegradation, PLA needs industrial composting conditions, including temperatures above 136 degrees Fahrenheit. It needs to be properly managed and routed to specialized industrial composting or recycling facilities. Under the right circumstances, microbes can turn the material into carbon dioxide and water within a couple of weeks. However, if it becomes littered or dumped, PLA sticks around for much longer. When pure PLA ends up in seawater, it does not seem to biodegrade at all.

Other kinds of bioplastics are known to better biodegrade in marine environments. However, whether that really happens in a specific case, and how long it will take, is highly unpredictable.

No standards for plastics labeled as biodegradable or compostable today makes them suitable for disposal in the open environment.

Marine biologist Christian Lott and his colleagues at HYDRA, a private research institute with a research station on the Italian island of Elba, have field-tested biopolymers in a range of aquatic environments from tropical beaches to the Mediterranean seafloor. They found that materials that had been shown to biodegrade in seawater in lab testing also do so in the environmental conditions they tested.

Among the materials tested at HYDRA are bioplastics called polyhydroxyalkanoates (PHAs). Produced by microbes, PHAs comprise a tiny slice of the market. However, demand is expected to grow strongly (PDF) in the next few years.

A thin film of PHA will degrade in a tropical environment on the seafloor in one to two months, Lott says. But in the Mediterranean, it can take 10 times as long. "And imagine, in the Arctic, in the ice or at ice-cold water, or in the deep sea where we have 0 to 4 degrees, hardly any nutrients around, bacteria will have a hard time to digest these materials," he says.

"Life is complicated," Lott puts it, "and it’s about life — because it’s bio-degradation."

Even with the best waste management systems, it’s realistic to assume some plastic always will escape. Think of the abrasion from car or bike tires, from ship paints, sneakers or synthetic garments. If bits of plastics are small enough to travel through the air, they will be hard to ever contain.

So could we design a plastic that breaks down pretty much anywhere?

A material that has a full functionality but biodegrades immediately at its end of life is "not going to happen. Never," Lott says.

Moreover, when considering the impacts of plastic products on humans and the environment, looking at just the plastic itself is never enough. A single plastic product can contain dozens of chemicals, some of which might have adverse effects on us humans or other organisms if they are released into the environment and taken up.

Lisa Zimmerman, a Ph.D. student in the Department Aquatic Ecotoxicology at Goethe University in Frankfurt (Main), Germany, has conducted research that suggests that chemical mixtures present in biodegradable or bio-based plastic products can influence the metabolic activity of the bioluminescent bacterium Aliivibrio fischeri. In a number of additional experiments she found that these chemical mixtures can have the potential to cause oxidative stress or influence the hormonal system in living organisms.

"What I can tell from my research is that bioplastics are not necessarily safer than conventional plastics with regard to the toxicity of the chemical mixtures they include," Zimmermann says.

Bio-based plastics have other environmental implications as well. One big criticism has been the land needed to grow the plants.

On the basis of a report from the Institute for Bioplastics and Biocomposites (IfBB) [PDF] in Hanover, European Bioplastics estimates that bio-based plastics use less than 0.02 percent of agricultural land. “There is no real competition with food and feed production,” Ißbrücker argues.

But Christoph Lauwigi, who represents the working group on waste and resources with Friends of the Earth Germany (BUND) worries about the side effects of a growth in the bioplastic market. In the German Plastic Atlas, he explains that an increase in bio-based plastics could raise the pressure on arable land, potentially leading to water shortages, desertification and the loss of habitats and biodiversity. He also notes that the reliance on industrial agriculture for the production of new plastics might increase monoculture cropping and the use of pesticides.

Ißbrücker says the industry is working toward a smaller land use footprint by using waste materials or algae. At this point however, these sources cannot be processed as effectively yet as the current feedstocks, she adds.

Plastics marketed as "biodegradable" will contribute to plastic pollution if they are lost or littered. They do not break down as quickly and completely in the environment as the term might imply and thus can harm wildlife and ecosystems. But there are a few applications where using biodegradable plastics may provide a net benefit to the environment.

In some countries, bags that are compostable under industrial conditions are used to collect organic waste. They can offer a cleaner and more convenient way than nondisposable containers for people to collect food scraps for composting.

Enzo Favoino, a waste management expert at the Scuola Agraria del Parco di Monza in Italy and chair of the Scientific Committee of Zero Waste Europe, is convinced this is the way to go. Fewer organics in the trash means less fermentation, allowing waste management operators to come by less often to pick up the trash. This not only can save money but also boost the recycling rates of other materials such as paper, glass, plastic and metal, he says.

Even with the best waste management systems, it’s realistic to assume some plastic always will escape.

However, not every country has the infrastructure in place to use compostable bags to these ends. In Germany, for example, compostable bags are screened out of the organics by technology that doesn’t distinguish between compostable and conventional plastic.

Biodegradable plastics are also marketed as mulching films for agriculture, which farmers can just leave on the fields to plow under. For decades, plastic mulch film has been spread out on fields to support crop growth and save pesticides and water. But with conventional plastics, this so-called Plasticulture can cause "white pollution" to accumulate on farmland if it is not removed and discarded.

Is biodegradable film a safe alternative? If they are proven to biodegrade in the soil, they would leave less pollution behind. But wind or animals might carry pieces of broken film into the air, rivers or oceans, to places where they might not be able to biodegrade. There’s also a potential for chemicals to leach from the films to the soil ecosystem, a question under scrutiny.

There’s no doubt, bioplastics are still plastics. Just because some are made from plants or have the potential to biodegrade under limited conditions, they can’t be touted as "planet-safe." For the ones that claim to biodegrade or compost, the fine print is crucial.

This article was originally published on Ensia. Read it here.

See all by Anja Krieger