Sustainability professionals respond: How is the transition to the Global Goals actually going?

In 2015, United Nations member states, together with civil society and business, came together to prepare a blueprint to achieve a better and more sustainable future for all by 2030. The Sustainable Development Goals (SDGs) outline 17 areas where we need to make a collective effort and provide a useful sustainability framework for business and other actors. We have a decade until the 2030 deadline and businesses are increasingly committing to the goals in a public way.

While there are signs of progress, GlobeScan and SustainAbility’s recent SDG Progress Report shows that sustainability experts continue to view progress on sustainable development as largely inadequate, and rate poorly businesses’ contribution to advancing the goals. More than 450 sustainability professionals from North America, Europe, Asia-Pacific, Latin America and Africa responded to the survey, and the resulting report draws comparisons between current findings and data collected two years ago on the same topic.

Results indicate a long-term trend toward less negativity among experts on sustainability progress overall. The proportion rating society’s progress on sustainable development as "poor" has declined substantially compared to when this question was first asked in 2005. At that time, as many as 84 percent of sustainability professionals surveyed rated progress as "poor"; this proportion is down to fewer than half (49 percent).

When sustainability experts were asked about society’s progress on individual goals, the proportions saying progress has been "good" also increased slightly across most goals, compared to when experts were asked the same question two years ago. While this suggests we are seeing some progress across most goals, experts are still far more likely to rate progress on each goal as negative than positive, showing we still have a long way to go. 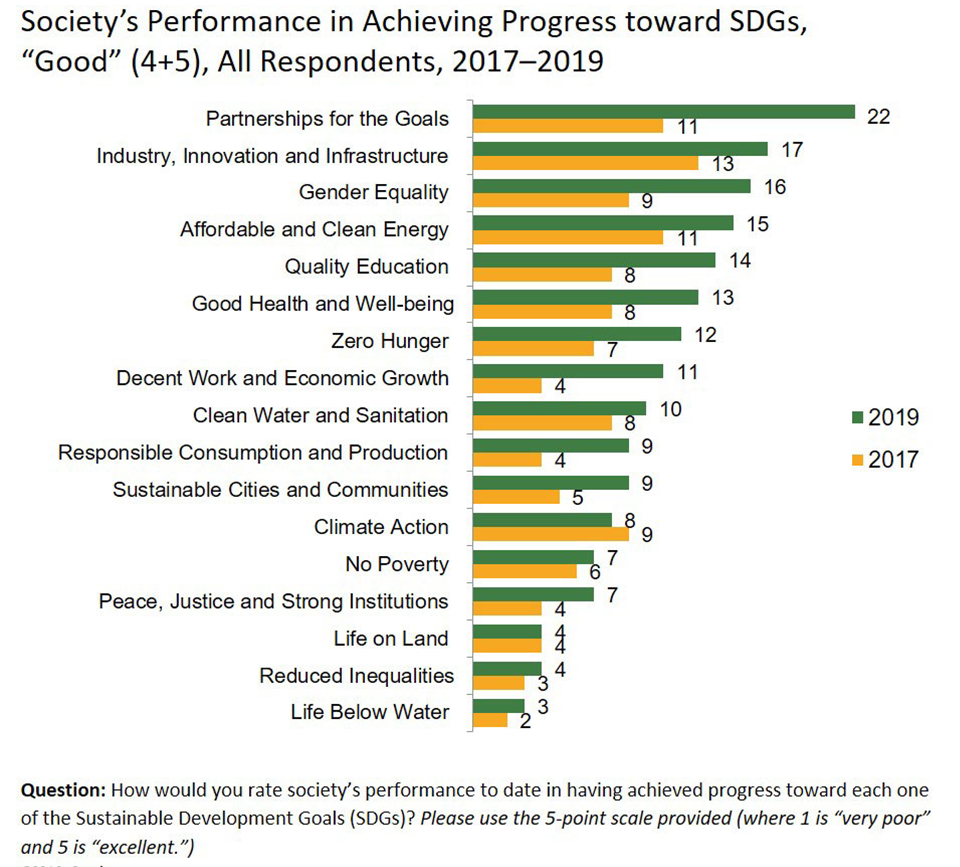 Goal No. 17, Partnership for the Goals, is where progress seems to be strongest. While the proportion of experts viewing positive progress on Goal No. 17 is not large, this number has doubled since 2017, suggesting that activity in this area is becoming increasingly recognized. Businesses should build on this momentum, continuing and increasing collaborative efforts to contribute to the goals.

Collaboration is also highlighted by many experts in our study as being crucial for driving progress on the SDGs. When asked to share their advice about how society can make the greatest progress toward the SDGs between now and 2030, respondents provided comments such as "Partnership and collaboration is key. Multi-stakeholder initiatives should be one of the major actions to achieve SDGs" (Academic sector expert, Thailand) and "Work collaboratively, not competitively with all stakeholders including competitors to address specific issues" (NGO expert, Australia).

When asked to share advice about how society can make progress toward the SDGs between now and 2030, respondents provided comments such as 'Partnership and collaboration is key.'

There also has been positive movement on perceptions of the work done on Quality Education (No. 4), Gender Equality (Goal No. 5) and Decent Work and Economic Growth (No. 8), in particular. In contrast, Reduced Inequalities (No. 10), Life Below Water (No. 14) and Life on Land (No. 15) remain at the bottom of the list in terms of positive progress, with no perceived increase compared to 2017. That mirrors new findings from a United Nations group reporting that the rate that species are going extinct is accelerating to unprecedented levels.

The SDG Progress Report also explores experts’ views of the relative urgency of the goals, and there is overwhelming agreement that Climate Action (No. 13) is the one SDG that requires the most urgent attention. Experts across almost all regions and sectors agree that Climate Action is the most urgent goal, except those based in Africa / Middle East who are slightly more likely to point to No Poverty (No. 1) as a priority. Responsible Consumption and Production (No. 12) also stands out as particularly urgent, according to experts surveyed.

However, when the relative urgency of each SDG is compared to relative momentum on the same, we can see that we have achieved the least progress on precisely the goals that experts consider to be the most important — in particular that of Climate Action, but also Responsible Consumption and Production and Life on Land. At the same time, progress is deemed strongest on the goals perceived as relatively less urgent, such as Partnerships for the Goals, and Industry, Innovation and Infrastructure (No. 9). 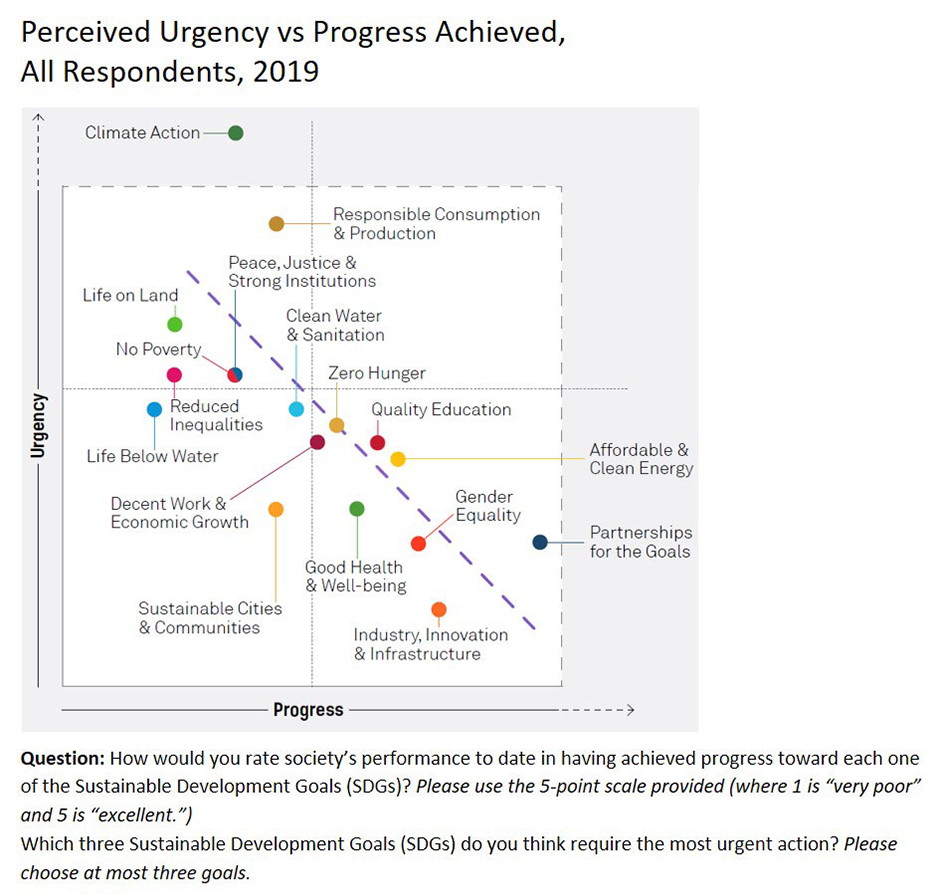 When assessing the different societal actors’ contributions to the SDGs, NGOs, social entrepreneurs and the United Nations continue to be viewed by experts as driving the most progress. Perceptions of their work in this area have improved since 2017, reflecting improving perceptions of the work done to advance the goals. Although the proportion who believe that the private sector is doing a good job contributing to the SDGs also has increased slightly compared to two years ago, almost half of sustainability experts surveyed still say that the private sector is performing poorly.

While business is not viewed as negatively as national governments or investors, experts’ perceptions of the private sector still lag far behind NGOs, social entrepreneurs and the United Nations. Companies may do well to collaborate with these actors in order to achieve stronger and more recognized results on the SDGs. 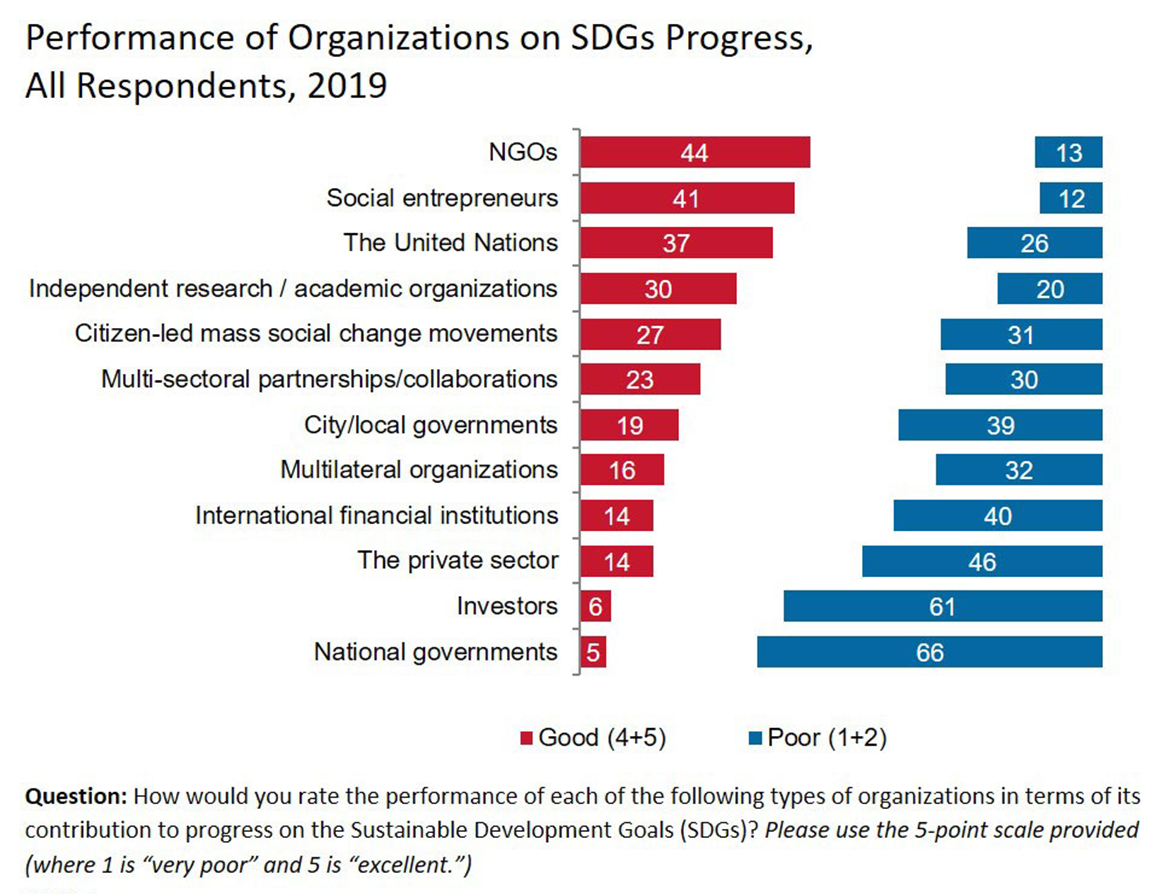 More consumers are serious about climate change. Are business and government listening?