An idea for bringing multicapitalism to the masses.

Imagine a world in which municipalities and other political states were actively managed to be socially, economically and environmentally sustainable.

In such a world:

Now compare this to what we have in place today:

All in all, we can say with virtual certainty that civilization today is literally flying blind when it comes to the way in which it measures and reports the sustainability of human activity, thanks in part because most of its social and environmental impacts (especially those of businesses) are not reported at all.

As a theory of change, the one-company-at-a-time approach is arguably slow and limited in its effects.

What this tells us, among other things, is that most mainstream management information systems, or dashboards, in use today are deeply defective. Instead of providing managers and policymakers with the information they need to responsibly manage their organizations’ and municipalities’ impacts, they systematically deprive them of it. It’s no wonder that sustainability in the conduct of human affairs is so broadly deficient.

B Corps to the rescue

To help alleviate this problem, a new corporate structure known as benefit corporations was introduced in 2006 by B Lab, a non-profit in Wayne, Pennsylvania. That was followed soon thereafter by Certified B Corporations, or B Corps for short. As explained on B Lab’s website: "Certified B Corps are businesses that meet the highest standards of social and environmental performance, public transparency, and legal accountability to balance profit and purpose. B Corps are accelerating a global culture shift to redefine success in business and build a more inclusive and sustainable economy."

According to B Lab, the first 19 B Corps were certified in 2009. As of today, there are more than 2600 Certified B Corps worldwide, most of them outside the United States.

Notwithstanding this impressive success, this construct has its limitations. Chief among them are: the fact that the B Impact Assessment tool used to assess the performance of existing and prospective B Corps is not context-based in its orientation and therefore is not a sustainability accounting tool per se; and benefit corporation designations and B Corp certifications only apply to individual organizations, one at a time, and usually to relatively small organizations — so far, anyway.

To help address this, my organization, the Center for Sustainable Organizations, proposes a new idea: Certified Sustainability Zones (CSZs). As the name suggests, CSZs would cover municipalities and other political states (towns, cities, counties, states, provinces) based on their commitment to context-based sustainability accounting. In a CSZ, the municipality or political state is certified, not the individual organizations within it — although the latter are expected to participate in the program to a prescribed degree, as that is where the leverage lies.

How might this compare to what Herman Daly had in mind with his vision of steady-state economies? In 1977, Daly defined a steady-state economy (SSE) as "an economy with constant stocks of people and artifacts, maintained at some desired, sufficient levels by low rates of maintenance 'throughput,' that is, by the lowest feasible flows of matter and energy."

CSZs differs from SSEs in at least two important ways:

1. What must be maintained over time in a CSZ is not "stocks of people and artifacts," but the resources required to ensure human (and non-human) well-being, no matter what their populations or stocks of artifacts happen to be.

Rather than continue to pursue the growth of only one type of capital (economic) at the expense of all others (the prevailing economic doctrine that many of us refer to as monocapitalism), the CSZ concept is grounded in multicapitalism (PDF), the idea that performance should be measured, managed and assessed in terms of our impacts on all vital capitals and not just one of them.

2. We do not wish to confine the concept of a CSZ to the world of the physical. Many resources that humans rely on for their well-being are non-physical, intangible, abstract constructs, such as the idea of sustainability itself and human knowledge. 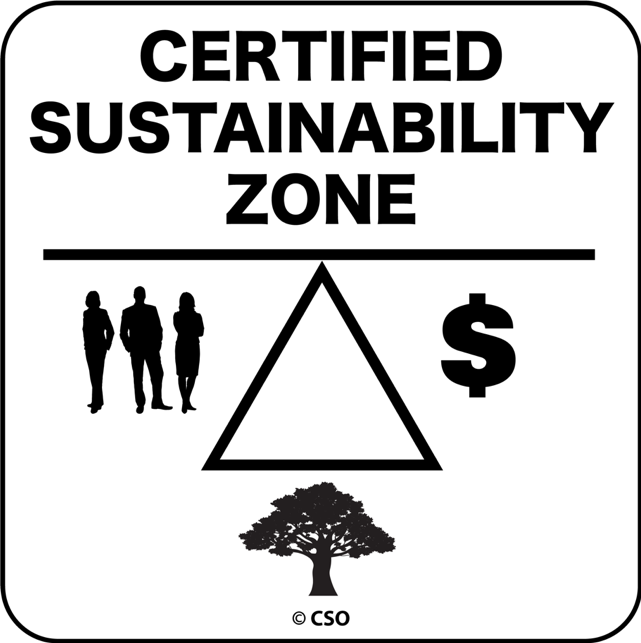 A CSZ, then, is a designated municipality or political state that has embraced sustainability in an explicitly rigorous or literal way in the conduct of its affairs as an overarching policy position, such that its social, economic and environmental impacts in the world can be sustainable — and measurably so.

To qualify as a CSZ and be branded as such, a municipality or political state must agree to the following:

Many resources that humans rely on for their well-being are non-physical, intangible, abstract constructs, such as the idea of sustainability itself and human knowledge.

It would take one to three years to certify, depending on the size of the municipality or political state being covered. The price of the certification also depends on scale. Under the CSZ construct, political domains will pay a fee of $2 per inhabitant up to $250,000 for the first year (and $1 per inhabitant thereafter, up to $125,000). Companies within those zones would pay fees based on employee headcount; up to a maximum of $20,000 annually.

Thinking beyond one company at a time

As a theory of change, the one-company-at-a-time approach is arguably slow and limited in its effects.

By comparison, all inhabitants of a CSZ are active participants in triple-bottom-line accounting. Importantly, municipalities and political states that decide to embrace this approach must commit themselves to reform in terms of how they, their businesses and other organizations address performance accounting.

Unlike current approaches, which interpret performance mainly in terms of financial outcomes and rarely in terms of social and environmental results, participating organizations in CSZs will embrace triple-bottom-line accounting of a context-based kind. Monocapitalism gives way to multicapitalism. More than anything else, this is the defining characteristic of a CSZ.