The art of wearing your green on your sleeve

Appalachia has — over many decades — suffered massive and debilitating economic decline due primarily to the loss of manufacturing jobs, and experienced severe environmental degradation, largely due to coal mining and "fracking" for natural gas.

So it might surprise readers that SustainU — maker of "100 percent recycled and American-made clothing" and a leading post-startup at the intersection of sutainability and sports — is sprouting up in Morgantown, West Virginia.

GreenSportsBlog chatted with Chris Yura, CEO and founder of SustainU, about how his company came to be, its mission and its involvement in the recent Major League Baseball All Star Game in San Diego.

Lew Blaustein: SustainU’s website says the company is dedicated to "changing the way clothes are made to improve the environment [and] reinvigorate America’s manufacturing sector." Nothing like having low expectations. Before we get the SustainU story and the role sports plays in it, let’s find out a bit about your incredible story, which started in Morgantown, home of the West Virginia University Mountaineers.

Chris Yura: Yes, I was brought up in Morgantown. My brother and I played football — he played at WVU and I was a four-year letterman at Notre Dame; class of 2003.

Blaustein: So, what did you do next?

Yura: Not sure what exactly to do, I moved to New York City to be a Ford model, specifically a fit model.

Blaustein: Forgive my ignorance; what is a "fit model"? 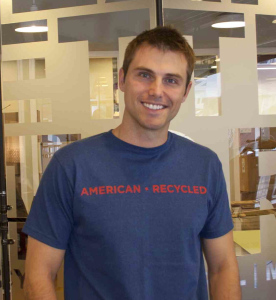 Yura: Apparel makers use fit models to make sure garments fit right for a certain size. Being a model, aside from allowing me to live in New York and abroad, allowed me to learn about the apparel business, about manufacturing.

Being from West Virginia, I also became schooled about NAFTA and saw some of its harmful effects. I saw what anti-progressive policies had done to the environment and to the mountains in Appalachia.

Gradually, I started to think about starting an apparel company that would be eco-friendly and sustainable. I mean, wouldn’t it be cool if a shirt stood for the ethics and the tradition of where it was made, and if the people wearing the shirt were wearing their values on their back?

Blaustein: Cool, indeed. How did the ethos of sports fit in to your early imaginings of the company?

Yura: Sports is such a unifying force — it gets people to buy into something bigger than themselves; a higher ethical consciousness. So yes, sports has been integral to the idea of SustainU since the very beginning.

Blaustein: So how did you go from being a Ford model to starting SustainU?

Yura: So back in 2006-2007 I decided I had to learn how to make clothing, knit and more. I had to learn what sustainable or green clothing meant. So I went to the Fashion Institute of Technology library in New York (not as a student). I made contacts with factories; apprenticed at a facility in North Carolina near Charlotte.

Blaustein: And then the economy crashed?

Yura: Exactly. The crash happened. But I thought: This can’t wait; it’s time to jump in the pool.

I talked with my folks — they were supportive of me moving back in with them — and we launched SustainU in 2009.

Blaustein: Who were your first customers?

Yura: Actually we started with music, making tees for D’Addario guitar strings, Evans Drumheads and then moved on to making shirts for large concert promoters like C3 Presents.

Blaustein: When did sports come in to the mix?

Yura: Not long after music. We handled the T-shirts for the very green America’s Cup in San Francisco in 2013. But we really started in sports in 2011 when we started to get some collegiate athletics department licensing rights by private labeling (where we make the goods for a different label), including Notre Dame, Georgia, Oregon, Clemson and Michigan State, among 15 or so others. The volumes have been strong. We did 12,000 units for the 2014 national championship football game.

Blaustein: College sports make so much sense to me. They have sustainability departments and idealistic and passionate students.

Yura: No doubt about it. Music and especially college sports helped us scale through private labeling. We proved our sustainable clothing niche was viable and started to build our own brand, moving away from private labeling.

Blaustein: What about pro sports? 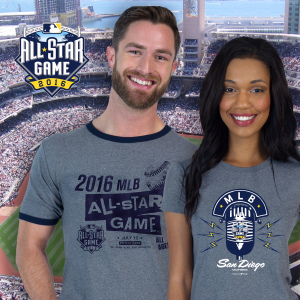 Yura: We were ecstatic to start with a license to make 100 percent recycled T-shirts for all 30 Major League Baseball teams as of Opening Day this season and will be launching something similar with the NBA soon. Aside from being key customers that will allow us to scale even faster, we also have a unique brand positioning: We are the only company selling pro sports licensed 100 percent recycled T-shirts at retail, with our own brand.

Blaustein: I would imagine the MLB relationship helps the SustainU brand gain awareness and positive imagery.

Yura: No doubt about it. Millennials want what we’re selling and they are a crucial target audience for MLB. MLB, the NBA and other leagues love SustainU — it’s a pure sustainability play for them.

Blaustein: With the MLB and NBA deals, SustainU must be in a steep growth phase.

Yura: We’ve been very fortunate, we’ve been growing at 30 percent per year over the last couple of years but expect 200 percent growth this year with the MLB and NBA deals.

Blaustein: How big is the company?

Yura: We have 24 employees in our Morgantown headquarters and, through contractors, we support about 300 more people in North and South Carolina.

SustainU is looking to lead the sustainable apparel movement and want to lead it for years to come. One way we will do this is by our design, which matches the younger consumers’ lifestyles: We feature wood grain designs as well as looks with musical and technological influences. Product-wise, we’re focused on what we do best: knit T-shirts, also fleece and pullovers. But we’ve got many new items in the planning phase so we can expand the offerings of recycled apparel.

Blaustein: Sounds to me like the future for SustainU is bright indeed — you guys are like the Under Armour of sustainable apparel. But let’s talk about the present. What is going on at the MLB All Star Game in San Diego?

Yura: SustainU has a 500-square-foot booth at the All Star Game Fan Fest alongside MLB Green. We are showcasing the product, our story and how it’s made. The visibility is just fantastic for us and we couldn’t be happier.

Blaustein: One last question: Are you still living with your parents?

Yura: My folks have been great but I have been able to get my own place.