AskNature: How can we design better packaging?

Every day, postal workers deliver millions of packages through the mail, trucks full of produce are transported around the globe and billions of dollars worth of packaged products are created, bought and sold.

Packaging is a ubiquitous, necessary aspect of modern consumer cultures. It keeps our products safe, clean and intact. Yet over time, much of this packaging leads to waste and pollution. Isn’t there a better way to package the products and services we use every day?

If we look to nature, there are signs that the answer is yes. This collection aims to explore some of the varied ways in which nature designs and develops life-friendly packaging.

How does nature build breathable containers? What clues from nature might point us toward designing protective packaging that serves an additional use after the item is unwrapped? Much like humans, the rest of nature is continuously on the move and transporting goods. How can nature’s ideas help us design solutions to our most difficult packaging challenges?

At the bottom of the Indian Ocean are large hydrothermal vents that spew hot water and minerals. They also provide an ecosystem for a variety of bizarre species adapted for living in harsh conditions.

One such species is the golden scale snail (Crysomallon squamiferum, sometimes called the scaly-foot) which feeds off the vent’s nutrients. Adhered to the vent structures, the snail is vulnerable to predators such as crabs and venomous snails that can puncture or crush the scaly-foot snail.

To protect itself, the snail uses a hard, armor-like shell with a tri-layered composition. Each layer has distinct chemical and physical properties that enable them to play different roles in managing forces from predatory attacks.

The inner layer is like a brick wall behind the marshmallow-egg shell complex.

The outer layer is a thin organic shell reinforced by greigite (iron sulfide) particles spewed out by the thermal vents. Most mollusks build their shells from inside out, and the golden-scale snail does that in addition to using the thermal vent’s iron sulfide deposits. When an intruding crab claw, for instance, does start cracking the outer layer, its particular microscopic structure localizes the damage as "sacrificial microcracks" around the iron sulfide particles. That is, many small, manageable cracks form right around the site of impact, instead of one large crack that could severely damage the whole shell.

The middle layer is a thick, dense layer of organic material that is pliant in nature, meaning it easily deforms. This property enables the middle layer to act as a shock absorber, relieving the pressure of a crab’s grasp and protecting against a poisonous snail's smashing blow. It could be compared to a dense marshmallow underneath an eggshell. The outer layer and middle layer relieve most, if not all, of the shock.

Any remaining mechanical energy reaches the calcified inner layer. It is the last layer of defense and if any forces are strong enough to affect it, they could permanently damage the snail. The inner layer is like a brick wall behind the marshmallow-egg shell complex.

Multicellular marine organisms face a constant onslaught of microbes and other small organisms seeking structures upon which to adhere. Whether they are fungi, algae, biofilm-forming pathogens or other lifeforms, they lead to biofouling on the surface of the larger organism that can cause serious complications.

The white dogwhelk (Dicathais orbita), a type of sea snail, produces eggs with remarkable anti-fouling adaptations. In early stages of development, the exterior of the egg capsule is covered in uniform ridges. Unlike irregular nano-textures observed on the surfaces of eggs from other marine organisms, ridges that are regularly spaced sufficiently close together are believed to minimize potential contact points for fouling organisms, making it harder for them to attach and settle.

This series of anti-fouling steps keeps biofilms and parasitic microbes from harming the egg.

Over time, however, bacteria will attach and take root on the surface of the egg capsules. To combat this, later stage eggs shed their exterior crust completely to reveal a fresh layer underneath.

After this shedding of the outer layer, lipid-loving droplets are extruded from pores on the egg surface and seem to exert some kind of antiseptic effect. This series of anti-fouling steps keeps biofilms and parasitic microbes from harming the egg until it is developed enough to hatch.

3. Protective scales of the striped bass

Many bony fish, such as the striped bass, receive significant protection from predators through their scales. Being only about 0.2 to 0.3 mm thick, these scales are surprisingly tough. They can stop about three Newtons (comparatively, a Newton is the weight of an apple falling from a tree) of force from penetrating them.

This is achieved with a two-layered structure. Each scale is composed of two equally thick layers: an outer bony layer that's highly mineralized for sturdy outer protection, and an inner collagen layer that's softer and less mineralized. These two layers work together to prevent the soft body tissues beneath the scales from being punctured.

Layering of the scales makes them much stronger than currently used human polymers.

When a predator catches a striped bass in its mouth and starts to bite, the bony layer is the first layer of defense. Able to withstand about two Newtons of force, the bony layer withstands most of the biting power.

With more bite strength from the predator, the scale cracks in half lengthwise and widthwise, creating four "flaps." The distribution of forces along the cracks between the flaps helps minimize damage to the underlying soft collagen layer. As the bite continues through the scale, the flaps are pushed down and the lower collagen layer separates from the upper bony layer.

While the flaps are being pushed down and continue to contact the collagen layer, they help redistribute the bite forces over their larger area. This results in less damage to the soft collagen layer than if the forces were concentrated at the puncture site. The flaps are so helpful that they increase the overall impact resistance of the scales by one Newton.

The scales cover most of the striped bass' body and partially overlap. Compared to human-made protective covers, this two-layer scale system is surprisingly tough. When compared to polystyrene and polycarbonate (used in CD cases and safety goggles), a single scale provides more protection. Layering of the scales makes them much stronger than currently used human polymers.

Application ideas: Strong and flexible packaging. Protective clothing and gear that are lightweight and with reduced movement restriction. Greenhouses covers or panels that would withstand weather. 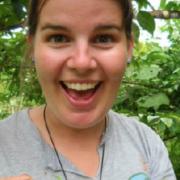 See all by Allison Miller