AskNature: How do you make energy?

Humans are becoming increasingly dependent on our ability to connect via technology and easily access the energy grid. Practically every facet of our lives is somehow plugged in and powered up. Yet as our demand for power increases, so must the innovative and life-friendly ways we access and use that energy.

Here’s a light bulb idea: how does nature make energy? For the billions of species that have existed on planet earth, humans are the only ones who have placed such a premium on unsustainable and non-local sources of energy. How then, does nature balance its energy books while producing relatively little energy waste?

This collection explores how nature has discovered brilliant ways to do just that. How does nature efficiently harness the sun’s energy for its own needs? How do living systems pack a big punch with little energetic cost? Does nature apply efficient chemical processes that produce energy and create inert waste products? Looking to nature to solve some of our most pressing energy issues is the next logical step.

In some deciduous trees, the leaves on the exterior of the tree canopy differ from those inside the tree canopy. The exterior leaves are referred to as "sun leaves," while the interior leaves are "shade leaves." These leaves have differences in shape, internal anatomy and chemistry that translate into specialized abilities to use different kinds of solar radiation effectively.

Sun leaves are typically smaller, more elongated and thicker than shade leaves, with more layers of chlorophyll-containing tissues and more extensive internal vascular systems. It is thought that sun leaves are better adapted to capture and use direct solar radiation (when it isn’t too intense to cause heat and other stress-related damage). Their elongated shape is also correlated with higher levels of solar radiation reaching the inner canopy where the shade leaves are.

Shade leaves appear to effectively use diffuse solar radiation, which reaches the inner canopy after having been scattered by other objects, such as the outer sun leaves, in the path of direct light. Shade leaves also can be found on the exterior canopy on the side that faces away from the prevailing sun.

'Spring loaded locomotion' has been used in the design of the pogo stick and some prosthetic legs.

It appears that exterior sun leaf characteristics can change with environmental conditions (they show plasticity), and that their shape in particular can influence the internal canopy environment that shade leaves experience. Plasticity in sun leaves seems to help stabilize inner canopy conditions, buffering it from abiotic stresses. Genetic variation and tree size also affect leaf characteristics, but it seems that whole-tree photosynthesis can be optimized by having sun and shade leaves respond differently to the environment. Sun and shade leaves occur in other species, too. In oaks, external leaves have narrower lobes while the lobes of shade leaves are broader.

Application ideas: Designing structures to be responsive to changing light conditions and availability. Altering shape of solar-collecting surfaces to take advantage of different types of radiation. Optimizing rather than maximizing how light enters a building.

Although most terrestrial animals that run, hop, or trot across the ground need to spend more metabolic energy to go faster, the hopping tammar wallaby can go faster without little or no increases in energetic cost. Furthermore, a female tammar wallaby can carry the heavy load of the infant "joey" in her pouch without increasing her cost of locomotion.

These remarkable feats are likely due to the storage and recovery of elastic energy by the large springy tendons in the wallaby's hind legs. During the leaping, aerial phase of the hop cycle, the wallaby’s forward movement represents kinetic energy and the gravitational pull back to the ground is a form of potential energy. These energies transform into elastic strain energy of stretching tendons when the foot hits the ground. That energy then can be recovered in the elastic recoil of those tendons that helps propel the wallaby back off the ground.

Rainbow trout can adopt a special swimming behavior that likely enables them to save their own energy by extracting energy from nearby water vortices.

As much as 90 percent of the energy stored in the tendon can be recovered for such reuse. The key to this energy recovery is that muscles attached to the tendons are stiff enough so that their length changes little as they generate force. If the muscles changed in length a lot, they might absorb and dissipate the tendon's elastic energy, making it unavailable to power the next hop. The faster the wallaby goes and the heavier the load, the more elastic energy gets stored and recovered, hence the cost of locomotion can be unchanged with speed or load over a normal range of speeds.

The use of tendons and elastic energy is also found in many other large animals that run (such as horses and turkeys), but to a much less dramatic extent in terms of energy savings as those observed in kangaroos and wallabies. It is as yet unclear exactly why these macropods experience such high savings in energy storage as a means of increasing locomotor efficiency is also observed in a variety of swimming animals, from squid to dolphins.

The use of elastic energy storage could be considered in the human design of all sorts of moving structures to increase energy efficiency. "Spring loaded locomotion" has been used in the design of the pogo stick and some prosthetic legs.

Application ideas: Kinetic energy storage product for cars. Prosthetics. Machines that capture energy to use in other applications. Pumps that recapture input energy.

Many fish swim using an undulating motion of their bodies. The muscle activity that bends the body and produces these movements during steady, continuous swimming can cost a significant amount of energy. But some fishes, such as rainbow trout, can adopt a special swimming behavior that likely enables them to save their own energy by extracting energy from nearby water vortices.

In a fluid environment, vortices are swirls of water or air often released (or "shed") from stationary objects and other living creatures, including other fish, that are in the path of an oncoming flow. Trout use water vortices that come their way from upstream sources to their advantage by adjusting their typical swimming behavior to produce a "slalom" movement between vortices. Body bends increase in amplitude and curvature, and the tail beats at a frequency that matches the frequency at which vortices are shed upstream. The pattern of muscle activity along the body also changes, where only muscles close to the head are active.

This differs from typical undulating motion where muscles contract all along the body, starting from the head and moving toward the tail to produce a traveling body wave that pushes the fish forward. Researchers hypothesize that these changes in muscle activity and body motion help the trout position its body so that it interacts with the vortices in a specific way.

The exact nature of this interaction is still under investigation, but one explanation is that the fish controls the angle of its body so that local flow from the vortices produces a continuous upstream force on the body. Scientist James Liao uses the analogy: "We hypothesize that trout use their body like a sail to tack upstream."

The general concept of taking advantage of altered fluid flows behind other objects to reduce the energetic cost of motion is found in human behaviors too, for instance, in cyclists that draft behind one another to save energy. 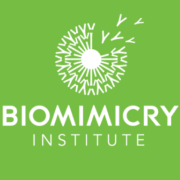 AskNature: How do you manage waste?

See all by Biomimicry Institute