Amid the hoopla about climate marchers and international convenings, a modicum of progress could be found in New York last week in addressing our growing climate challenges.

More than 1,000 businesses and investors and 74 countries (notably missing: the U.S.) called for a stable price on carbon, and some 30 companies committed to becoming carbon-pricing champions by aligning with the Business Leadership Criteria on Carbon Pricing (PDF). A New Climate Economy report demonstrated that economic growth and ambitious climate action fundamentally go hand-in-hand. Nearly three dozen companies signed the New York Declaration on Forests, setting a timeline to halve deforestation of natural forests by 2020 and end it altogether by 2030. A slew of other commitments, from ag to insurance. More reports than any of us could read.

And lots and lots of speeches — from the stages of Climate Week, the United Nations Climate Summit and the Clinton Global Initiative meetings, and hundreds — literally — of smaller events taking place throughout the gridlocked city. I made it to a half-dozen or so events over two hectic days. A lot of big names were on stage, albeit not a lot of big ideas.

Listening to it all, one thing struck me: an overriding sense of optimism by the corporate sector. Nearly every CEO, it seemed, proclaimed “I’m an optimist” on climate change, or some variant thereof. (Unilever CEO Paul Polman, speaking at the Climate Week opening ceremony, had the best formulation: “I’m an optimist because it’s too late to be a pessimist.”)

It was a bit of a head-scratcher. Unlike the government leaders and citizen marchers — the former were talking the talk, the latter were, well, walking — the corporate crowd seemed unrelentingly positive about the pathway to solving the climate crisis.

Why, I wondered, were business leaders so positive amid a steady drumbeat of discouraging news? Just days earlier, for example, the World Meteorological Organization's annual Greenhouse Gas Bulletin (PDF) reported that level of greenhouse gases in the atmosphere reached a record high in 2013, and 2014 was on track to be the hottest year on record. Where, in all this, was there room for optimism?

I set out to find out.

In conversations with a dozen or so business and thought leaders I encountered, I got a variety of perspectives, both on and off the record. The bottom line: The business world is taking a can-do approach to climate change — at least the more progressive and open-minded executives that attend these events.

“A lot of business leaders are optimistic because they see and understand the fact that climate change presents an opportunity for innovation, and they are making changes to their business that are helping them capture the future,” Aron Cramer, president and CEO of BSR, told me at a United Nations luncheon. He cited a group of companies including H&M, IKEA, Mars, Nestlé and Philips that are committing to 100 percent renewables for their operations by 2020. “If you look at the New Climate Economy report, you’ll see proof of what we have all believed for the last 10 or 15 years, which is that this is just a better way of growing businesses and organizations.” 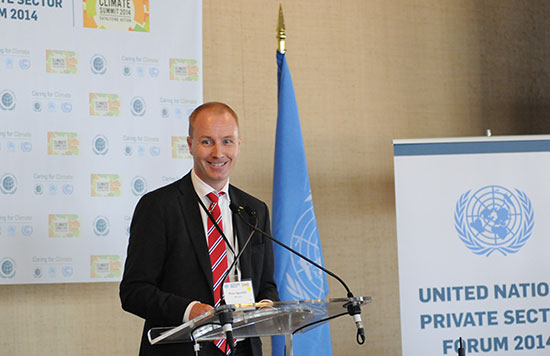 Granted, the optimism I heard came from a biased sampling. “The corporates who come here are generally involved in climate activities so they see the opportunity space,” Georg Kell, executive director of the U.N. Global Compact, said. “They also see the threat space. And for a businessperson to look into the future, it always makes sense to see the positive side.”

He cautioned: “Don’t forget there are many companies around the world who are not taking action on climate, who are sitting on the fence, who are basically lobbying against everything that makes good sense.”

Nonetheless, the mood seemed rosier than at comparable gatherings in the past. “Business, while it’s taken a while, has come broadly to the view that this is a real issue that needs to be addressed,” said Jeff Seabright, chief sustainability officer at Unilever. “Increasingly, businesses are internalizing the carbon challenge in their own strategies and business plans. That wasn’t the case 10 years ago, even five years ago, but you’re really seeing it today.”

The optimism also reflected the private sector’s innate sense of the possible, added Seabright. “Leaders in business tend to be fairly positive and aggressive and have an optimistic can-do spirit about what they can achieve, and then they set out the plans and execute against them. Sometimes they fail and they get up and they try another brand or another product and another. So I think there’s an inherent spirit of opportunity that underpins most business mentalities.”

That sentiment was echoed by others. “Business is bullish,” observed Mindy Lubber, president of Ceres, who also directs the Investor Network on Climate Risk. “They’re seeing the problem. It’s hitting them in a very real way and they are can-do people. These are people who know how to make things happen.”

Lubber was among the several I talked to who believed the positivity of this year’s Climate Week boded well for the U.N. climate talks in Paris at the end of 2015 — the next big opportunity for governments to come together to create the kind of global agreement that wasn’t possible in Copenhagen in 2009. Said Lubber: “We’re all optimistic that something is going to happen in the next 15 months. Something will happen.”

From Naysayers to Yea-Sayers

“A lot of the business community has now made the decision to say we’re going to tackle this problem,” said Steve Howard, chief sustainability officer at IKEA, who earlier in the week had marched alongside his boss, IKEA CEO Peter Agnefjall, and 400,000 or so other souls. “And what the business community doesn’t like is prevaricating. So we’ve made the decision to engage robustly with policymakers to say, ‘Let’s not listen to the naysayers. Let’s listen to the yea-sayers.’”

Is the optimism a bit too rosy? Daniel M. Kammen thought so. “There is no clear objective that we’ve galvanized around demanding,” said Kammen, director of Renewable and Appropriate Energy Laboratory at the University of California, Berkeley, and formerly the World Bank Group’s chief technical specialist for Renewable Energy and Energy Efficiency. “There’s not universal recognition that we must have a carbon price. And without that it makes every different industry goal something positive and that puts us in the nonbinding feel-good category. I think this has let industry off the hook a little too much.”

When I met up with him, Kammen had just emerged from a meeting on energy efficiency at United Nations headquarters, full of companies that either had great efficiency stories to tell or that were offering energy-efficiency services. It was inspiring to a point, he said, but Kammen criticized the lack of a demand for global efficiency goals and standards. “We’ve just set too soft a target and that’s why the companies are feeling in the driver’s seat and why they feel optimistic.”

Frances Beinecke, president of the Natural Resources Defense Council, felt similarly. “The private sector is taking a lot of direct action; they’re acting to reduce their emissions. On the other hand, the public sector and the activists at the ground level they know that the total of what has to happen is so significant — we need a global compact, we need national-level policies — that knitting together each of the private sector policies just isn’t enough to meet the challenge. So the corporate sector is taking their own steps, but as a citizen activist in the NGO sector, we need so much more.”

Will corporate optimism lead to real progress? It’s an open question. Still, to the extent that companies are putting on a positive face, it’s a very different face than was seen just a few years ago. Or, as Unilever’s Polman put it, perhaps it’s simply too late to be pessimistic.

“There are several scenarios that are good scenarios of how we can tackle this issue,” said IKEA’s Howard. “There are some really bad ones as well. But if you focus on the possibility and then gear your business and your actions to it, then you can make the future happen that you want.”

Reminds me of an old joke about the difference between optimists and pessimists: Optimists believe that this is the best of all possible worlds. Pessimists fear that the optimists are right.

Is 'net zero' much ado about nothing?

Is 'greenwash' the new 'fake news'?