After working for close to a decade for BP on projects in Indonesia and China, followed by a stint at the U.N., Christine Bader was ready to dive back into the multinational CSR work that she loved. And then the Deepwater Horizon disaster hit, exposing a very different BP. In response, Bader sat down and wrote "The Evolution of A Corporate Idealist: When Girl Meets Oil." In a review, The New York Times calls it "thought-provoking" and says, "If the book doesn't leave one convinced that every multinational has suddenly developed a guiding conscience, it does offer some encouragement that many are on the way."

This Q&A is an edited excerpt from a Sustainable Business Fridays conversation held Sept. 5 by the Bard MBA in Sustainability program, based in New York City. This twice-monthly dial-in conversation features sustainability leaders from across the globe. The previous interview was with Jeana Wirtenberg, on her book "Building a Culture for Sustainability."

Bard MBA: Why did you write a book about corporate idealism?

Christine Bader: This is a story that needs to be told. I got really frustrated with the public conversation after every corporate disaster, whether Deepwater Horizon, the Rana Plaza factory collapse in Bangladesh or even the financial crisis. The public conversation seemed to be, "Oh great, another example of why big business is evil and full of greedy people." Well, it isn't true, and if we believe that is the story, then it only leads us toward solutions that are aimed at getting the bad guys.

I wanted to reframe this conversation and focus on the people like me, people who are working deep inside the companies, far from the cameras, and try to understand even with the best intentions why do we fail and what do we need in order to succeed?

Bader: I graduated from Yale with my MBA in 2000, and like many of your students and graduates I was totally idealistic and convinced that business could be a force for good in the world, and I could help make that happen. I joined BP because the company then was run by John Browne. He was the first head of a major energy company to acknowledge the realities of climate change and urge action, and he was equally outspoken and progressive on human rights. I thought, what an amazing opportunity to be on the inside of a big corporation that's really trying to transform its industry, and more broadly trying to transform the way that business is done.

I was supposed to be a commercial analyst crunching financial and production data to analyze the assets in BP's portfolio that it acquired through a merger, and there was one project in particular that was proving very interesting. It was a liquefied natural gas project in West Papua at the eastern tip of Indonesia, a big gas field that sat very close to the surface. There were lots of complexities from a social and human rights perspective: We were to relocate 127 households to make way for the plant, partner with the Indonesian military — not known for their good community relations — and work in an environment that had historically been neglected by the central government, so there was very little there in the way of infrastructure or social services. So the more that we looked at this project, the more than we realized that we needed to put some full-time bodies on these issues. And again, this was in the fall of 2000; corporate social responsibility wasn't nearly as ubiquitous as it is today. 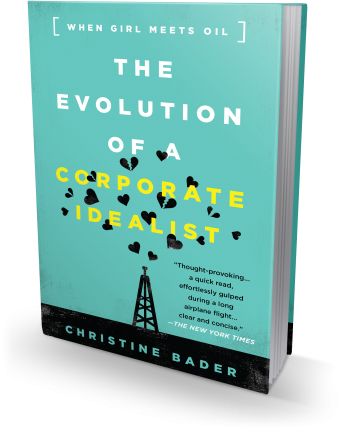 I put my hand up and said I would love to focus on these issues full-time. Remember, this is my first job out of business school. I had the full support all the way up to the top of the company to spend money, to bring in experts to try to advise us on human rights, on how to do the resettlement to international standards, and everyone that I worked with inside BP, even the most hard-nosed engineers, seemed to understand how important human rights and community concerns were to the success of the business. So here I am going, "Big Oil is awesome!"

Bard MBA: And how did it go?

Bader: Obviously I did not transform the whole of BP. But I know I made a difference to those 127 households around the project in Indonesia and I know I made a difference to the tens of thousands of migrant workers and communities living around the petrochemicals project I worked on in China. That's not bad. I know it's not good enough, but that's not bad.

Having had my heart broken by Big Oil [after the Deepwater Horizon spill], I have actually come back around to believing that the business can be a force for good in the world — but I know it's not going to happen by accident. So I am no longer that girl who fell in love with Big Oil 15 years ago. But I am still a corporate idealist.

Bard MBA: In your book, you focus on some critical challenges facing corporate idealists.

Bader: First, no one gets rewarded for what doesn't happen and a lot of work that this corporate idealist community does — whether their title is in CSR, sustainability or ethics or compliance or procurement — is about preventing bad things from happening, and it's very difficult to reward for. One of the women I interviewed for my book works in supply chain for a very large multinational; she told me how livid she was when one of her company's internal awards, which are very prestigious, went to a colleague who managed a big safety disaster. She thought, "Are you kidding me?! I prevented 20 of those."

Second, like any big organization, big companies get siloed. Sustainability and human rights tend to cut across so many functions inside a company that things can fall through the cracks. The director of corporate citizenship at Microsoft told me, "I have a horizontal job in a vertical world."

Third, people lie. Factory owners lie not because they like exploiting people or want to put their workers at risk, but because they think that failing one audit is going to mean losing the contract. There are some brands that are moving towards longer-term relationships with suppliers to try to deepen their relationships and say, "Don't lie to us, just tell us if there's a problem and we will work together to fix it."

Finally, so few executives ever bear witness to the impacts of their decisions on the people and on the communities at the far reaches of their supply chains. The international labor standards team at Disney told me how their team was able to arrange for Disney's CFO to visit factories in China where Disney-branded products were made. They did that visit like they do all other visits — unannounced audits in a random selection of factories — and they saw some good ones and they saw some that were not so nice, and that trip has enabled the team to continue to get senior-level support for their work.

Bard MBA: So being a corporate idealist requires patience?

Bader: This was really the punchline for me. It was really what helped me reconcile my time at BP. We have to recognize that we are working on the thorniest issues at the heart of globalization and no one individual, or team, or even company can change these overnight, so a lot of this work is slow. But the people who I spoke with really inspired me with their faith that they were moving their big supertanker companies in the right direction.

I interviewed a former Gap employee who told me about visiting suppliers in India. At the end of the day the guy showing him around said, "Okay, I am going to take you to one more that is not on your list. It supplies the domestic market." They walked up a few stories in this residential high-rise, into this room, and he said it was filthy and there was a kid working one of the machines.

I asked him, "How did you feel when you saw that?" He said, "It actually was one of the moments when I felt like all the work that we had been doing trying to improve labor conditions in supply chains over the past 20 or 30 years made a difference. Because if the factories that we source from today looked like that 20 or 30 years ago, then I know we have made progress."

Top image of Christine Bader courtesy of the author. The full recording of this conversation is available. The Bard MBA's Sustainable Business Fridays conversation resumes Sept. 26, with Derek Handley, former head and now consultant to B-team. 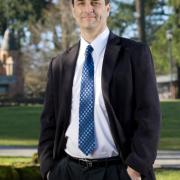 See all by Eban Goodstein