Clean energy financing to the tune of $150 billion by Goldman Sachs, $100 billion by Citi, $62 billion by Wells Fargo — is starting to add up to real money.

Follow the money, the advice goes, because the trail indicates where the future is headed.

The largest U.S. finance and banking companies lately are putting big money into renewable energy lending and investments — as highlighted by a Goldman Sachs announcement last week that it aims to triple its allocations to clean energy finance to $150 billion over the next 10 years.

That’s a lot of money. But the investment bank has company in Citi, which announced earlier this year a clean energy finance target of $100 billion in the next decade, and Bank of America, which plans to invest $125 billion over a decade "in low carbon business" — not to mention overseas banks that surveys find are even more active in this sector.

What's driving the growth in clean energy financing is demand, even as the banks talk about the need for a low-carbon economy and set their own sustainability goals.

"This is good business,” said Kyung-Ah Park, head of Goldman Sachs Environmental Markets, in an interview with GreenBiz. "We are doing this for commercial purposes and to serve our clients." she said. "We are seeing a lot more demand in clean energy and clean tech,” for financings and investments.

Sure, the target comes along with Goldman Sachs' pledge to become carbon neutral in its operations by this year, and it publicly called for negotiation of an international climate deal. But the bottom line is business demand. 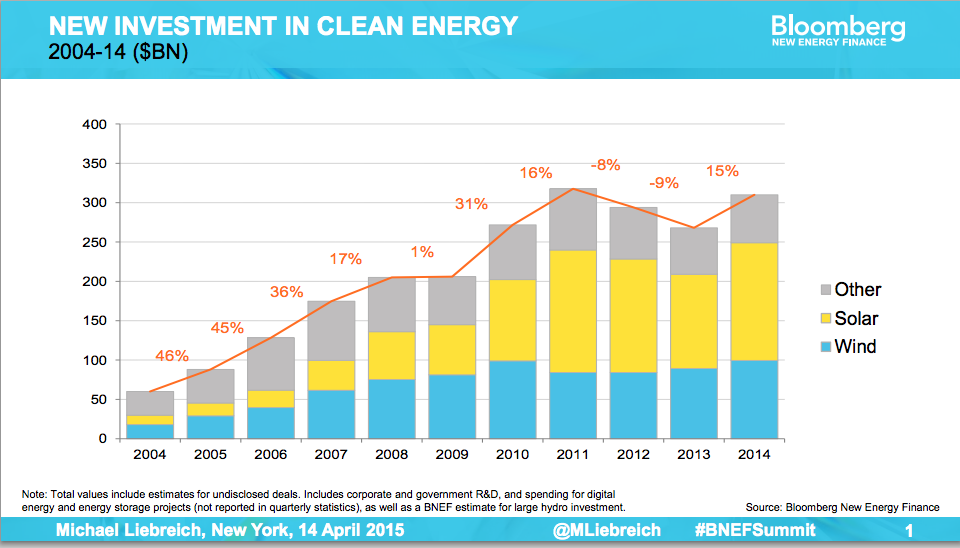 Goldman's own business is north of its projections. In 2012, the company set a target to do $40 billion in clean energy financing and investment over 10 years. Then in a single year, 2013, it deployed $10 billion of that. And in a mere less than four years, or from 2012 to this year's most recent quarter, it did $37 billion worth of clean energy finance.

"The most significant part (of the 10-year-goal) was done in the past three years, so that gives you a sense of the momentum," Park said.

Investors, too, are pushing its plan. "Mainstream investors are seeking clean energy assets as long-dated, yield-oriented investments. We've been in an unprecedented low interest environment," with years of low interest rates, so "investors are keen on what they see as potentially higher yield investments with long-term off-takes that are also clean."

They no longer view renewable energy as an outlier to the mainstream economy; indeed in the past year corporate giants from Apple to Proctor & Gamble, Google to Walmart have launched plans to become 100 renewably powered companies.

Worldwide investment is actually down, in dollar amounts, from last year, but that in part reflects the falling prices of renewable investments and currency exchange rates that reduced the dollar value of projects. Global investment in clean energy for the first three quarters of this year was $198 billion, according to Bloomberg New Energy Finance, whose advisory board chairman Michael Liebreich called it "a resilient performance given the sizeable shifts in foreign exchange rates that will have reduced the dollar value of projects outside the U.S."

More low-carbon lending, but do they assess carbon risk?

Even as they shift huge amounts of funds into renewable energy lending and investments, U.S. banks are being criticized for not adequately assessing the risk on their books from their fossil fuel investments.

According to a study by Boston Commons Asset Management (PDF), U.S. banks are behind their counterparts in Europe, Australia and Asia in recognizing that the risk in their fossil fuel lending.

"Across all regions, banks failed to adequately assess the carbon risk of their lending and underwriting portfolios and to reflect such risk in executive compensation and board oversight procedures. We did not find much evidence that the banks we surveyed conducted comprehensive, climate related stress tests or adjusted loan pricing in view of climate risk," Boston Commons Asset Management said in a report released this fall.

"Nevertheless, banks worldwide are clearly making efforts to rebalance their portfolios to reduce exposure to energy intensive sectors, such as coal, in favor of energy efficiency or renewable energy."

It called on all banks, but particularly U.S. banks, to do comprehensive carbon footprint analyses of their lending portfolios.

Such analyses could provide a sense of their stranded asset risk exposure, or the amount of loans based on fossil fuels assets that might never be burned.

Reuters estimated in December that undeveloped oil and gas projects worth $150 billion would be put on hold this year because the falling price of oil made the projects unprofitable.