The beef about burgers

Sponsored: We’re in a race against time to achieve a globally sustainable food system, and the humble hamburger could hold the answers to what will get us over the finish line.

This article is sponsored by Quantis.

Over three decades ago, the humble hamburger asserted itself as a key economic indicator with the birth of the Big Mac Index — a highly reliable and easy-to-understand metric for measuring the relative purchasing power of local currencies. Thirty years later, the burger is once again making headlines — this time as an indicator of the impact that our food system has on the planet.

We’re in a race against time to achieve a globally sustainable and resilient food system. To get to the finish line before we find ourselves on an overheated, parched and deforested planet, it’s necessary that sustainable food be available to everyone — shifting from a niche item for the privileged few who can afford to pay extra to an accessible, everyday choice.

So, how do we get there? The best place to look for answers may be what we place between our buns. 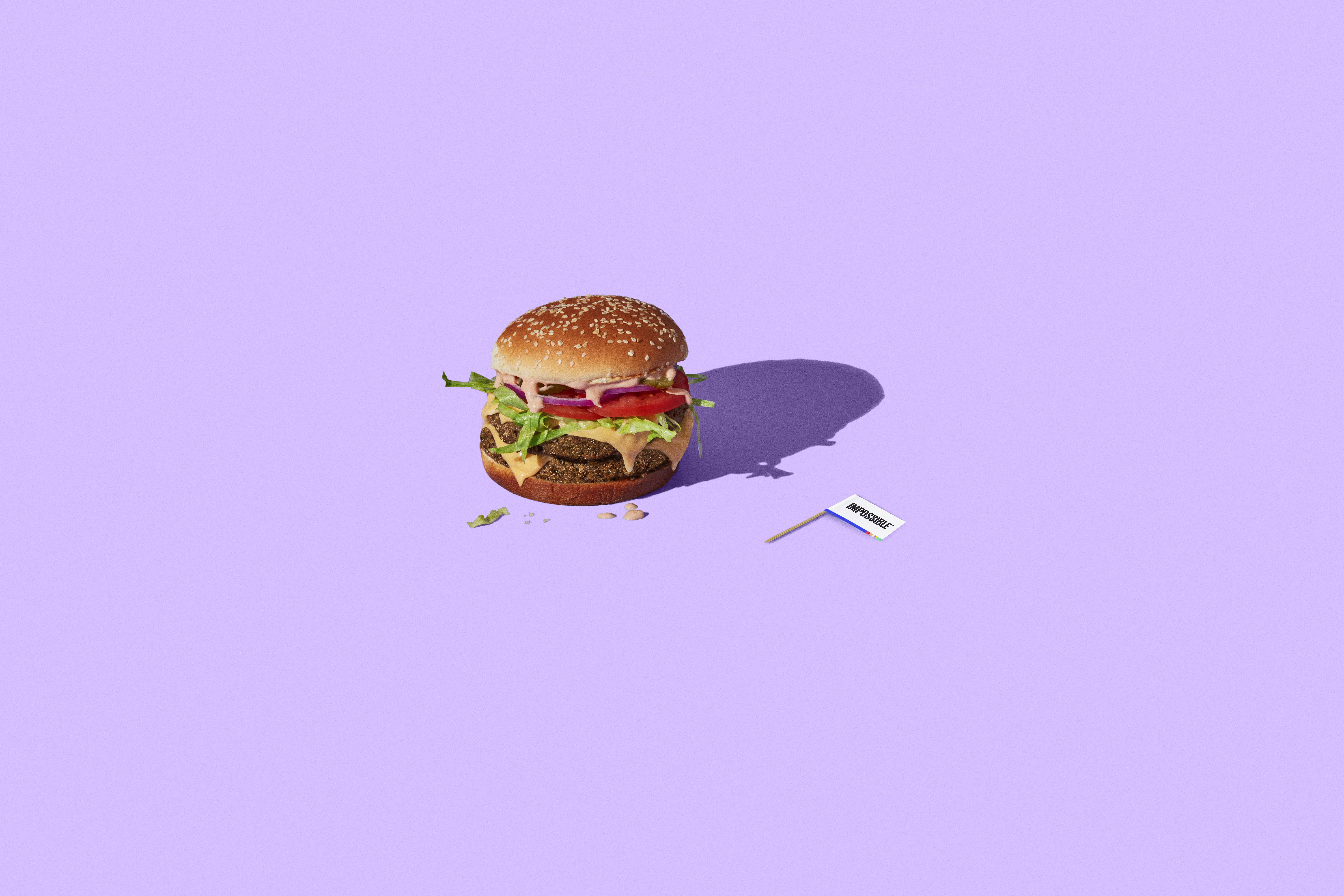 The hamburger, which has become a ubiquitous global menu item and whose primary ingredient is beef, is perhaps the most challenged major food commodity in terms of how it affects our climate, water availability and forests. And lately it’s been cooking up some major food for thought: Can we get the world to slash its beef consumption? Can we find and implement sustainable ways to produce beef?

These questions have kicked off a race to produce a planet-friendly burger. Fortunately for the planet, several strong contenders have emerged — and they’ve brought their data along with them. In recent months, both Impossible Foods and Beyond Meat have publicized results of life-cycle assessments (LCAs), each showing an enormous improvement in greenhouse gas emissions (GHG) in comparison to typical U.S. beef production. Traditional veggie-burger brand Morningstar Farms previously published an LCA demonstrating a similarly strong performance for its products.

These brands are coming to the table with clear data to support their claims and with a new generation of marketing and product design strategies to break beef’s hold on the burger market.

In the case of Morningstar Farms, the company recognizes that it’s much easier to convince people to make a different meal choice than a full-blown lifestyle change. To that end, it created a campaign focused around the impact of single choices — meal by meal — for creating a healthier planet (check out its Veg-Effect Calculator). In short, it showed that veggie protein and meat protein can co-exist in someone’s life.

Impossible Foods and Beyond Meat are focused on targeting our senses: developing products that look and taste more like meat. This strategy is most apparent in Impossible Food’s decision to include heme protein in its plant-based burger. The red-hued, iron-containing molecule is what our red blood cells use to carry oxygen — and what makes meat taste like meat. Can science concoct a recipe for a plant-based patty that tastes almost exactly like beef? Early returns are encouraging, as the expansion and market valuation of these companies are shooting up to nearly — if not beyond — impossible levels. 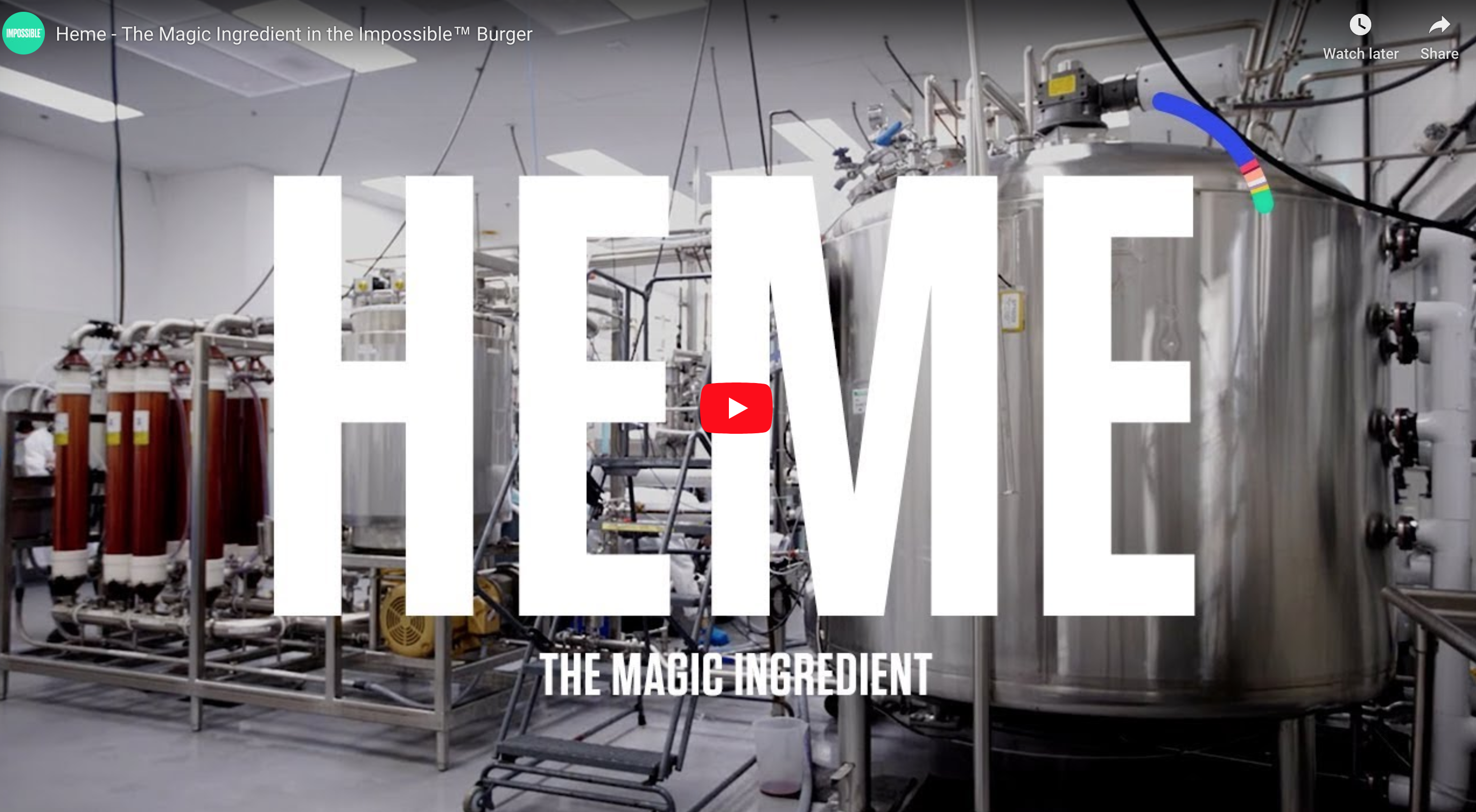 So, is it beef’s destiny to sit on the sidelines and watch as the race for a more planet-friendly burger unfolds? Many in the industry are saying "Not so fast" as they look to explore methods to drastically improve their environmental footprint.

Last year, McDonald’s became the first restaurant chain to join the more than 500 global companies committed to Science-Based Targets on climate change. It included a commitment to cut the emissions intensity across its full farm-to-tray value chain in the coming decade. Dozens of other major food and beverage companies are on board, but McDonald’s embrace of a science-based pathway for carbon reductions is ambitious and impressive, indicating a high commitment to seek and embrace pathways for improvement.

Where will the beef industry look for climate reductions? One might think that the efficiency improvements of recent decades in the feed supply chain and in animal genetics leave little room for better eco-efficiency, and this may be true. However, mitigation options are being explored in two key beef climate hotspots: the methane-rich emissions from cow burps and cow manure. While these solutions are important, another answer is also quickly being noticed — the soil below our feet.

A provocative finding we released last month suggests that, at least in some cases, pastured animal systems could remove GHGs from the atmosphere by storing carbon in the soil at a rate that offsets a substantial amount of the climate impact of raising the cattle. This finding is likely not representative of all beef produced as "regenerative" or "rotationally grazed" because the farm in question, White Oak Pastures in Bluffton, Georgia, is a unique farm, possibly in a very favorable location for this effect.

However, the findings are thought-provoking and challenge us to think more broadly about the types of solutions a burger-focused sustainability index should include. It challenges those of us who have thought that beef can’t be a part of the conversation of a sustainable diet to keep our minds open and focus on the outcomes rather than our prior expectations of the path to achieve them. 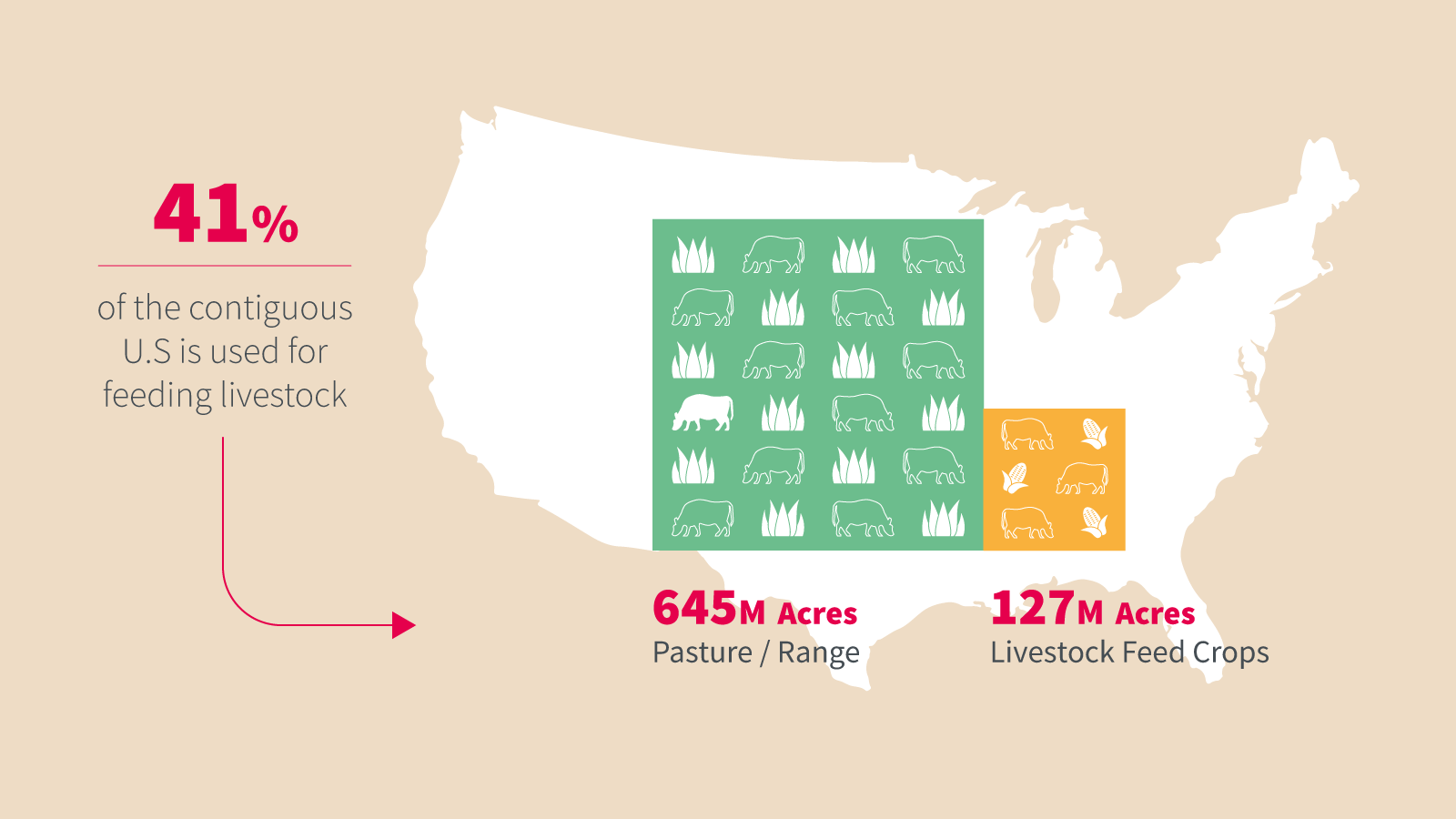 The United States alone has 127.4 millions of acres being used to produce animal feed crops, the soil quality of which is gradually being depleted. What if we put the animals back on the land? Could the return of grasses and large animals to these traditional grasslands provide a significant climate benefit without sacrificing productivity?

Signs are at least pointing to "maybe," which is an exciting prospect given how challenging it will be to shift most of the population to a fully plant-based diet. For those wondering where animal well-being fits into this conversation, the vision of converting our current system to anything like that at White Oak Pastures also should be encouraging.

As an author of three of the four LCAs cited above, I’ve been asked a lot of questions about how to interpret the outcomes. What’s the true story amid competing claims for the burger crown? Which of these options is better? My answer is that they’re all better — significantly better than the burger most of the planet is finding on its bun today.

These studies show that we need to find solutions for improving the world’s hamburger diet, but what is encouraging is that many of these solutions already exist. Some we’ve been staring at for a long time and some we’ve only just started to understand. Meanwhile, other options, such as culture-grown meat, continue to enter the conversation.

I also think it’s important to promote the argument and the competition — all these options help us to make significant progress. How representative are the White Oak results for regenerative beef? Can regenerative beef scale economically to meet demand? How sustainable is the row-crop farming behind many plant-based options?

While many solutions are available and applicable, we still need better science to sort much of this out. Science most likely will bring about even better innovations and developments to put better burgers on our plates. 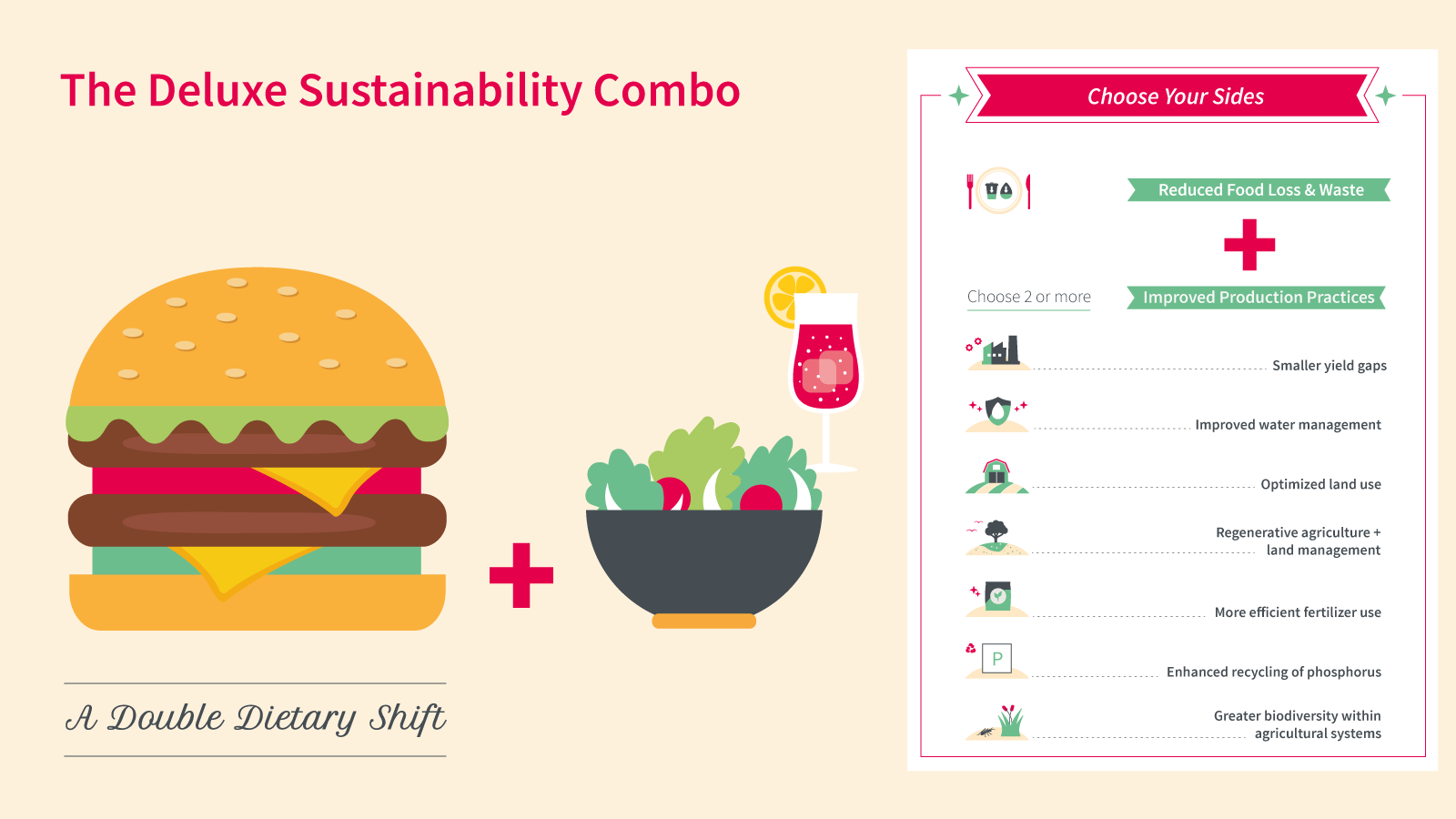 The Big Mac Index succeeded because it gave a clear and relatable way to communicate otherwise confusing — or boring — economic data. So, what’s the clear and simple message on burger sustainability? Plant-based options undoubtedly need to be a major part of the story: The evidence of the benefits is clear. But it’s not that black and white.

A global dietary shift isn’t likely to happen overnight, meaning that sustainable solutions for drastically improving the way we raise beef are essential. Conversations about shifting diets on a large scale are often framed as "bending the curve" rather than a sudden-step change. While we wait to see if the type of dietary curve-bending proposed by the recent EAT-Lancet report is possible, it’s worth keeping an open mind about how much improvement might be possible within the existing meat supply chain.

Let’s continue with a collective and positive debate to drive progress towards a better burger system — now and for the future. 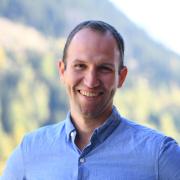 See all by Jon Dettling