Beermaker Carlsberg zeroes in on zero

That is the question prompted by a recently unveiled set of goals that promise to turn the global brewing giant into an organization with "zero carbon footprint, zero water waste, zero irresponsible drinking and a zero accidents culture." The ambitions are commendable and are backed by a host of specific medium and long-term targets, but are they achievable? Can a multinational with a complex supply chain and sites in 36 countries really eradicate its carbon footprint? Can one company convince populations around the world to give up irresponsible drinking for good?

The ambitions are commendable and are backed by a host of specific medium and long-term targets, but are they achievable? Can a multinational with a complex supply chain and sites in 36 countries really eradicate its carbon footprint? Can one company convince populations around the world to give up irresponsible drinking for good?

Speaking to BusinessGreen, Simon Boas Hoffmeyer, sustainability director at Carlsberg Group, is confident that despite their ambition the "Together Towards Zero" goals can be delivered, and as early as 2030. After all, this is not a plan that was simply thrown together after a few beers.

What we started with was getting the facts straight.

"It all started with a fairly new management team coming in — our CEO, Cees 't Hart, has been in place for 1.5, two years now — and when he came in, one of the things that he championed together with the management team was a new corporate strategy called Sail 22," Boas Hoffmeyer recalled. "In this corporate strategy sustainability was a key part of it — it was integrated into how we look at the overall strategic outcome for the Carlsberg Group."

The board set the sustainability team a challenge to deliver what Boas Hoffmeyer describes as "a new reinvigorated sustainability program that was fully aligned with our corporate strategy."

He noted: "The way we approached it was to do a materiality assessment. This is basically the most traditional way of looking at a sustainability strategy, where you go out and you ask external stakeholders, which topics, which themes do you believe we should focus on as a company, as a beer and beverage company operating in the markets where we are? Then we also did an analysis of our internal stakeholders, asking colleagues which challenges and opportunities are you seeing, where are you seeing pull from consumers and customers who are interested in sustainability topics? Where do you feel we need to focus?"

The result was a "sustainability materiality matrix" that allowed the company to identify the four areas the final strategy would focus on. From there, a comprehensive research program was commissioned to support the strategy.

"What we started with was getting the facts straight," Boas Hoffmeyer said. "It is really about data, data, data. We could see we had a lot of data on our breweries' performance as we have been very stringent about following up about performance on water consumption, on carbon emissions, on energy use. We had solid benchmarking." 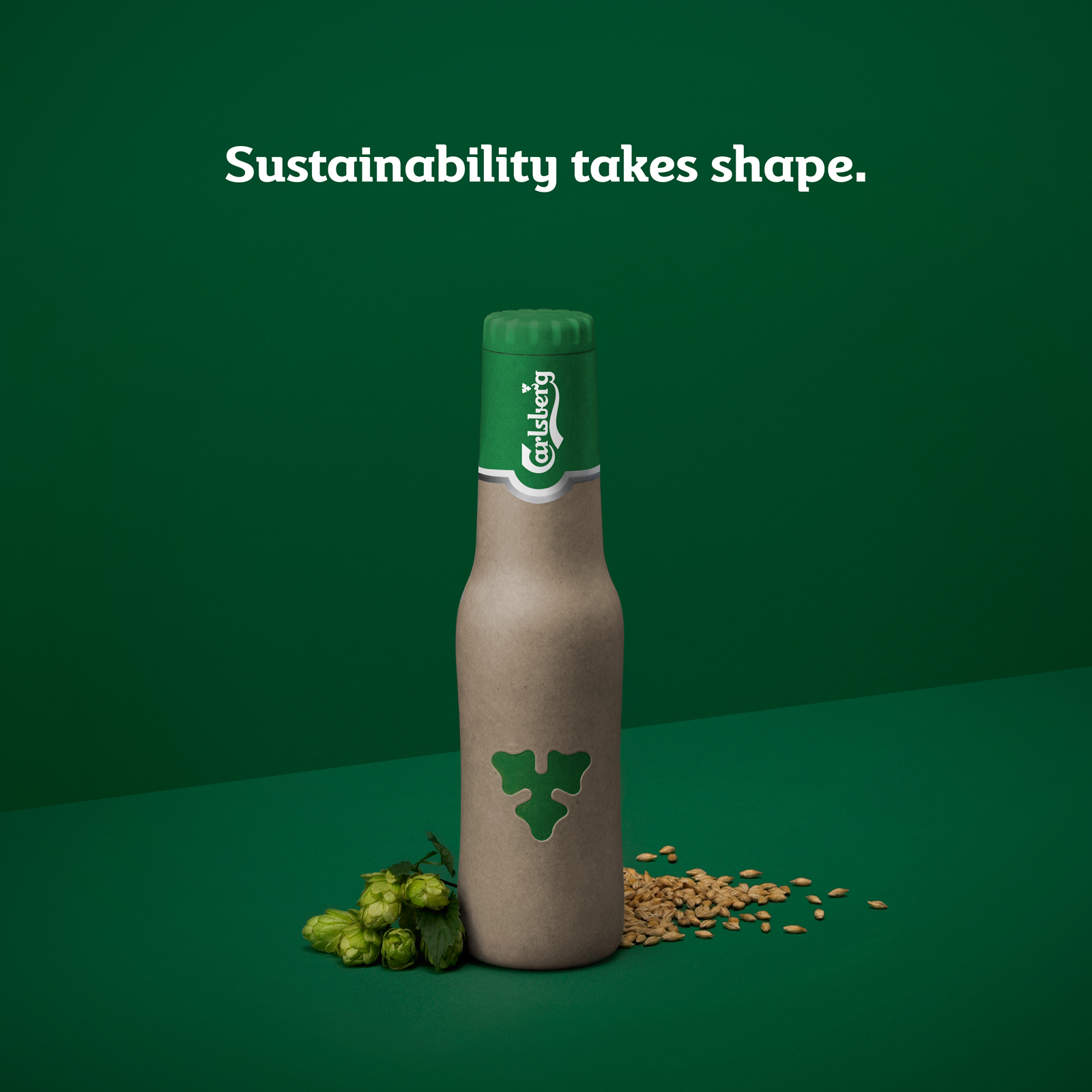 However, the company swiftly recognized this data did not extend far enough into its supply chain. "For internal operations, we had that data and we knew where to improve to achieve more," Boas Hoffmeyer said. "But when it came to the full value chain, the last time we did a full analysis was 2009/10, so here we really needed to re-do this assessment of our total carbon value chain. We went into a partnership with Carbon Trust to get the facts straight on where the emissions come from, which sector has which share: agriculture; packaging; logistics; and so on."

He describes the research as a huge, highly granular task. "We gathered data on everything we purchase, on every mile driven, on the split on cooled purchases versus non-cooled purchases, the energy mix in local markets, the grid mix in local markets; all of these things took an immense amount of time to gather the data and get the facts straight on," he said. "But we now have a very solid data foundation where we are able to both benchmark our local companies with other breweries and in the wider value chain.

"It took 18 months. This is not something you do overnight, especially when you have 86 breweries and you operate majority-owned companies in 36 countries, when you have 42,000 colleagues, and you have an organization that is constantly re-evaluating what you are doing. This is a huge change management task."

Thankfully for Boas Hoffmeyer and his team, this effort was backed by a board that had been convinced of the need to embrace a more sustainable business model.

He insists that a progressive engagement with sustainability issues is baked into the company's "raison d'etre" while acknowledging a lot of companies would adopt a similar line. "We did look at purpose," he said. "I know this is a topic a lot of companies are looking at, and it has become a little bit like 'the new thing you need to do.' But for us we saw we already had a purpose forever... We are partly owned by a foundation that contributes all its dividends to society already. Being a good corporate citizen was really deep in who we were."

However, the team also took steps to flesh out this purpose with some sound business arguments. "What we did with all these experts who are out there — the likes of Carbon Trust, WWF, internal experts and others — we did a very clear, concise strategy document explaining the business case for why we should focus on these four topics to a much larger extent than we have in the past," Boas Hoffmeyer said.

The document, which remains private and internal, explored the rationale for pursuing a zero emission, zero water waste operating model, covering everything from likely increases in the cost of carbon emissions globally to the importance of being proactive in optimizing production, the potential subsidies Carlsberg could exploit by being frontrunners in the adoption of clean technologies, the improved reputation and preference over competition when it comes to the products on the shelf, and the risk minimization to ensure the company and the communities in which it operates have continued access to water.

"The case is compelling when you take everything into consideration," Boas Hoffmeyer said. "But the big change on Together Towards Zero compared to what we have done in the past is for the first time ever, we looked at longer-term targets than three years. This was an absolute key part from the outset. In order to achieve the scale and scope of change that both we and the world needs, we need targets that look further into the future. That is why we set on targets towards 2022 and 2030."

Does that mean the company has relaxed the payback period it expects from sustainability projects and investments? "That is for sure the case," said Boas Hoffmeyer. "But of course, we are still a business."

Encouragingly, the falling cost of clean technologies means the company may be able to avoid making too many trade-offs in pursuit of its environmental goals.

For the first time ever, we looked at longer-term targets than three years. This was an absolute key part from the outset.

"What we have in our detailed roadmap is an overview of the current payback of these investments and of course we start with the investments that have the fastest payback, and then we move on," Boas Hoffmeyer said. "Our very clear conviction is payback will become better on many of these investments as we move towards 2030. We can't focus on delivering all the projects at the same time, as that is not feasible, but it makes sense to start with the lowest payback time and then move up. Our conviction is we will see big developments in technology and the supply of sustainable solutions towards 2030 that will make it easier for us to deliver the scale and the scope of the changes we want."

The scale and scope of those changes are considerable. Boas Hoffmeyer said an analysis to ascertain a science-based emissions target using the methodology approved by the Science-Based Target Initiative revealed the company should aim to cut emissions 36 percent per hectare liter by 2030 — a target it will overshoot considerably with its zero emission goal.

But the big question, as always, is how to turn admirable environmental goals into a practical reality? Boas Hoffmeyer insists concrete steps to slash emissions at Carlsberg breweries are already underway.

"Our first target for our brewers is zero emissions by 2030 — for the geeks out there that is Scope 1 and 2 emissions under the GHG Protocol, that is the way we define zero carbon emissions from our breweries," he said. "For that target, we have a roadmap that takes into account every single brewer's energy profile and emissions, and how we move to zero carbon for all of these."

He adds that the "toolbox" the company has to meet the target is "very wide and it becomes wider every day." For example, boilers are being electrified in countries that have low carbon in the grid mix, while the company has adopted a target to eliminate coal use at all its breweries by 2022.

"One of the substitutes could be biogas, which we already generate at 18 breweries from our own waste water," Boas Hoffmeyer said. "But we can also get biogas from external sources. Another way would be to employ sustainable biomass as a source of thermal energy."

Electricity makes up about a third of the company's energy consumption, and here too work is underway to cut emissions with Carlsberg one of many high-profile brands to sign up to the RE100 initiative. However, as a multinational, meeting the target is not simply a case of switching to green power tariffs.

"We wanted to keep our options as open as possible, so we can use everything in the toolbox," Boas Hoffmeyer said. "That includes our own generation of electricity where it makes sense — one example is we have installed 8,000 solar panels at a site in China, which I believe is the world's fourth biggest brewery solar installation — or buying certificates, because we do believe that by creating the market demand for renewable electricity we are contributing to increasing investments and securing supply of renewable electricity globally."

There are good reasons for this mixed approach, highlighted by the climate at the firm's Danish headquarters.

COP15: Is this 'the Paris Agreement for nature'?

'All the pieces are in place': IEA tips global heat pump market for rapid growth

Is the corporate world approaching a climate disclosure tipping point?