One of the largest commercial LED lighting installations projects in the world — the retrofit of more than 4,500 JPMorgan Chase branches by General Electric's energy division, Current — started life as a proposal for a far-more-modest pilot project.

But when Mike Norton, global head of property management for the financial services giant, started adding up the potential energy savings, his team suggested moving more quickly. The ultimate contract announced in February 2016 is part of the bank's broader $200 million investment in technologies and services meant to reduce JPMorgan's carbon footprint across more than 75 million square feet of real estate in 60 countries.

As of early November, the overhaul was about 80 percent complete across JPMorgan's retail branches, Norton told GreenBiz. A second wave of upgrades centered on the company's commercial office buildings, as well as the addition of a cloud-based system for managing heating, air conditioning and lighting in strategic locations, is still underway.

But here's a supporting metric that speaks for itself: as of July, lighting-related energy consumption at the branches where the updates have been completed was cut in half. The reduction target for overall power usage is 15 percent.

"I realized there was a big opportunity to take this real estate portfolio and make it great," Norton said. "It didn't take long for people to jump on that bandwagon."

I realized there was a big opportunity to take this real estate portfolio and make it great. It didn't take long for people to jump on that bandwagon.

Given GE's push to automate and optimize many corporate processes using digital technology, it's not surprising that the JPMorgan Chase will rely heavily on metrics driven by sophisticated dashboards, such as the GE AllSites software application for monitoring the ebb and flow of efficiency and defining operating parameters across multiple sites. Using that system, for example, the bank will test ways to switch heating or air conditioning on or off from afar, using data about local weather or (potentially) information about local utility costs to guide decisions.

But for Norton, the underlying strategy is far more holistic and strategic — his team reviews and debates ways to decrease electricity consumption and water conservation on a quarterly basis. Those ongoing discussions helped inspire investments in thermal storage equipment that uses ice to keep buildings cool and "thermal blankets," which JPMorgan is adding above the drop ceilings in 1,000 branches across Florida, Texas and Phoenix. The material helps buildings maintain temperatures at a specific set point more consistently, Norton said. That, in turn, helps reduce the usage of rooftop heating, ventilation and air-conditioning equipment by as much as 40 percent to 50 percent, he estimated.

When it comes to prioritizing which buildings are next in the queue for updates, Norton said there are a mix of factors to consider, including utility costs in a given market; whether the facilities are multitenant, leased or owned; and how big an impact the changes could have on employees or the local community.

For example, the company has committed $150 million to a diverse set of sustainable infrastructure investments and economic development activities across the city of Detroit. Last week it allocated $900,000 to support a variety of projects including retrofits of all its branches there, and revitalizing commercial properties across the Lower Eastside.

For Boston Scientific, a disciplined framework is integral

Medical device manufacturer Boston Scientific, which manages more than 100 facilities around the world including more than a dozen manufacturing sites, has become far more methodical about investments in energy systems since it embraced a corporate-wide approach to decision-making, a system known simply as GEMS (global energy management system). The program, a collaboration with the National University of Ireland, Galway, caters specifically to the needs of "energy-intensity" industrial organizations.

"We don't think of sustainability as a program, it's not a single variable type of equation," said Brad Sorenson, senior vice president of global manufacturing and supply chain for Boston Scientific. "It's a combination of social, tactical, environmental, safety and operational responsibility." 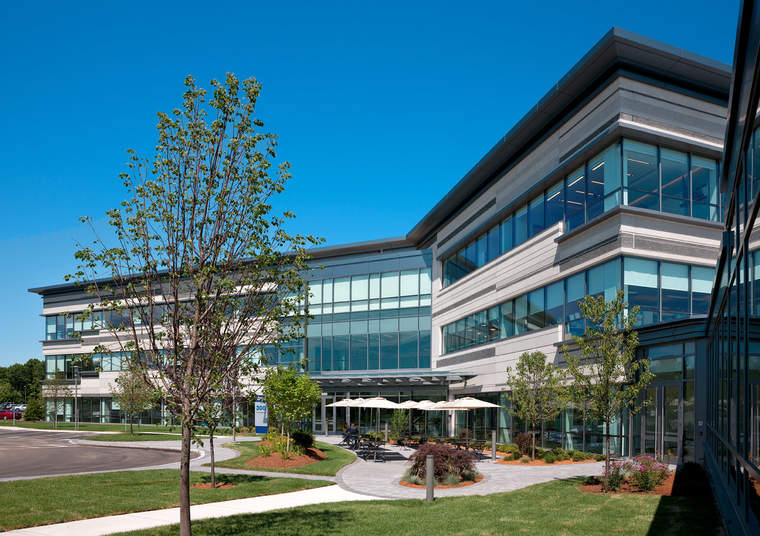 Boston Scientific
<p>Boston Scientific's headquarters building in Marlborough, Massachusetts.</p>
GEMS includes representatives from around the world, who are all focused on how to deliver optimal performance at their locations. It uses the framework to watch six benchmarks: energy consumption; energy management maturity; the percentage of its portfolio certified independently; carbon footprint; green energy (solar and other renewable); and cleaner energy (resources such as combined heat and power systems that still use fossil fuels but are more efficient than conventional energy).

Last year, the company reduced its Scope 1 and Scope 2 greenhouse gas emissions by 11,000 tons, to a total of 108,000 tons. About 28 percent of its locations hold certifications under the LEED or Energy Star programs (LEED has become virtually an "edict" for all new sites), and 25 percent of its operations are powered by either green or cleaner energy: last year, Boston Scientific commissioned CHP systems at sites in Galway and Cork in Ireland and in Coventry, R.I.

Sure if we had ownership, we would have more control, but by working with landlords and other companies, we end up in collaborative discussions that shape our way forward.

All decisions about investments are considered through a centralized process and considered quarterly by a team that includes the leader of global real estate strategy, so that the company can "make the best decision possible," Sorenson said. Among the sorts of things the team might discussion: How can heat from production processes be absorbed? How could a site benefit from native vegetation? How will changes affect environmental health or safety?

For example, even though CHP is a technology that Boston Scientific expects to embrace more broadly, you won't see it in Costa Rica where hydropower makes more sense. It's more important that a decision be "directionally accurate" with the company's long-term objective of managing all of its manufacturing operations in a carbon-neutral way by 2030. "With rigor and discipline, this is attainable," Sorenson said.

Tech companies tend to be pretty particular about the corporate culture they like to portray publicly, and cloud software giant Salesforce is no exception. The company takes its Ohana Design philosophy — a way of ensuring that its workspaces "feel" similar from building to building and region to region — very seriously. It wants employees to feel less like workers and more like "family," as the Hawaiian-inspired phrase suggests.

The Salesforce sustainability team is using that movement to embed its green buildings priorities more permanently into its real estate strategy. After all, the company needs to live up to its B Team pledge to achieve net-zero carbon emissions for its entire global operations footprint by 2050, which it achieved earlier this year. 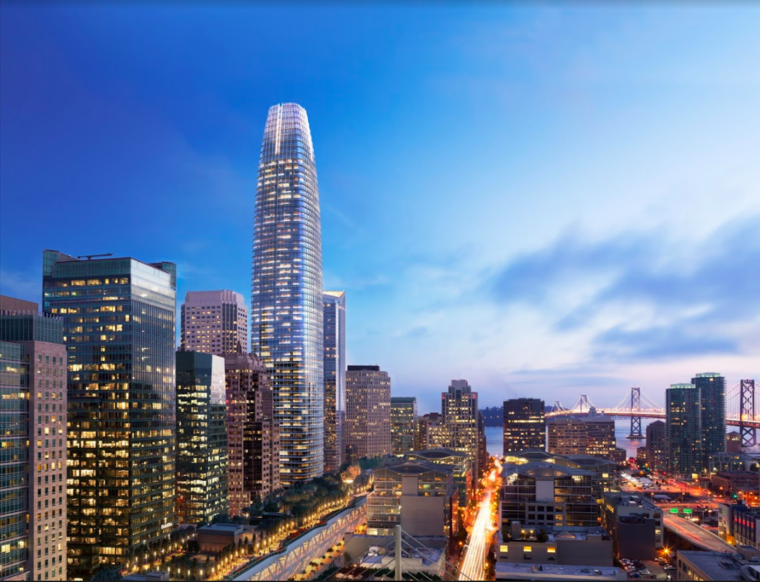 Salesforce
<p><span>Saleforce&nbsp;</span><span>Tower, the tallest building in San Francisco,</span><span>&nbsp;is a 1.4-million-square foot, 61-story building on the corners of 1st, Mission and Fremont Streets.</span></p>
"There is really no difference between sustainable and healthy buildings," said Patrick Flynn, senior director of sustainability for Salesforce. "There is a ton of willingness to focus on this."

To make things simpler and reduce distractions, Salesforce created a flow chart (or a "playbook" in the company's nomenclature) to walk through decisions about which green building frameworks or ideals to embrace at a particular location. This includes a series of questions: the answers guide the suggested follow-through.

It's pretty much a given that Salesforce will aim for a LEED version 4 Platinum certification for its marquee or headquarters sites, according to the diagram. But it will opt for LEED Gold (or an equivalent system outside the United States, such as GreenMark in Singapore) for offices up 10,000 square feet. Ownership has very little to do with the decisions: the company leases almost all of its facilities, including the data center behind its cloud services.

"Sure if we had ownership, we would have more control, but by having to work with landlords and other companies to achieve this, we end up in collaborative discussions that shape our values and our way forward," Flynn said. "And the benefits flow through to other tenants."