How many Fortune 500 organizations support some of the iconic campaigns? The answer may surprise you.

In any given month, the GreenBiz editorial team is alerted about at least a dozen new climate-related commitments — sometimes more, depending on the season. From inside the corporate sustainability movement, in fact, it often feels like the forward momentum is unstoppable.

But how many of the biggest companies shaping the world economy — notably those in the United States — are really on board with these public declarations of allegiance to high-profile campaigns and initiatives?

Unfortunately, the answer is, "Fewer than you probably think."

As of mid-February, just 109 members of the Fortune 500 — the iconic list of the largest U.S. companies — were on board with least one of seven iconic programs supported by businesses dedicated to supporting greenhouse gas emissions.

While some of those organizations were involved in more than one, just one technology company, San Francisco-based Salesforce, was committed to all of them. Five more companies — Adobe, Microsoft, Target, VF Corp. and Walmart — have each committed to six. 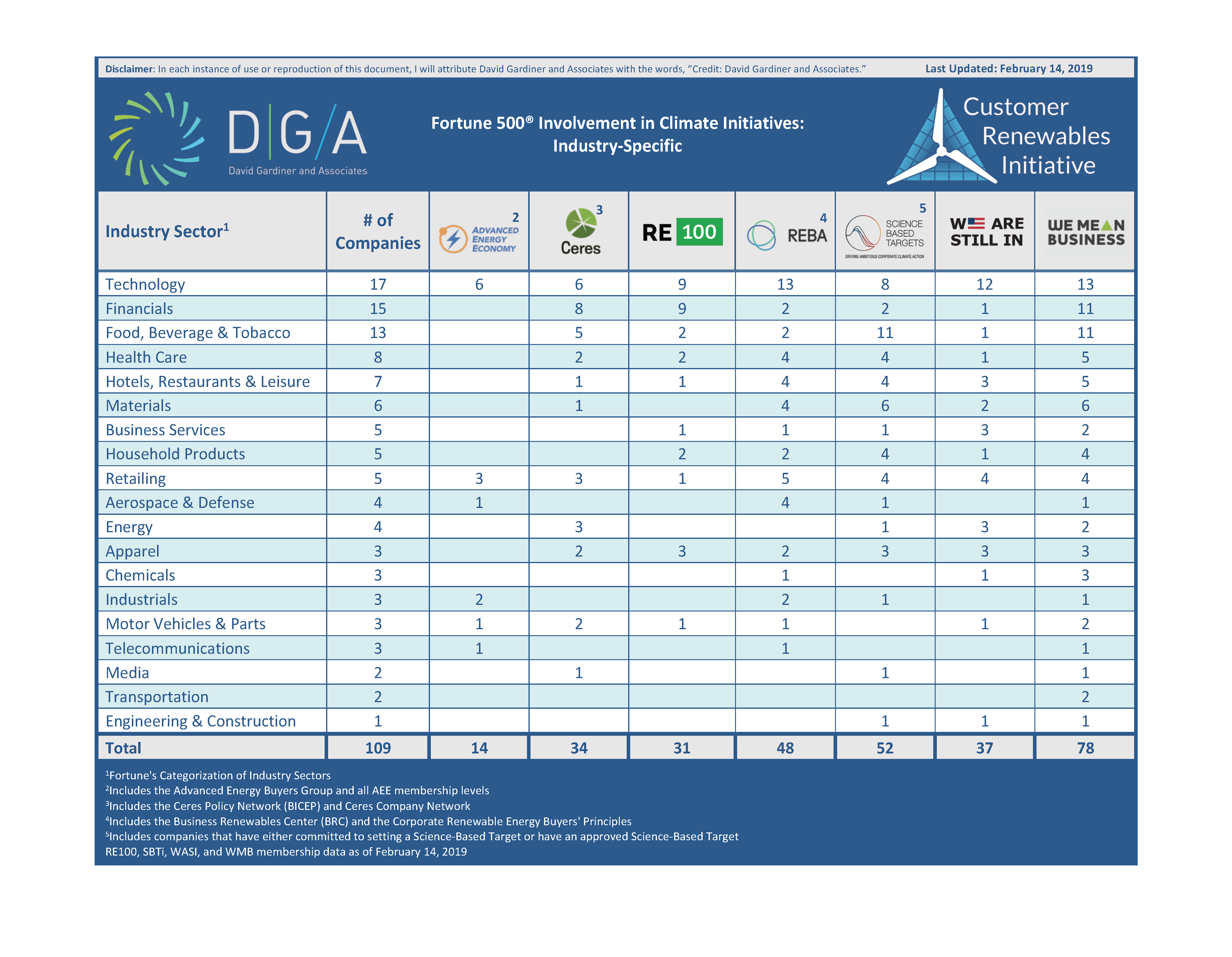 While there are certainly many NGO-led initiatives that companies can support — particularly plastics-busting commitments — these programs and organizations were picked for inclusion because of their broad dedication to clean energy leadership and reducing emissions in the spirit of the Paris Agreement, said DGA senior vice president Blaine Collison, who spearheaded the data-gathering project.

Collison was surprised that barely 20 percent of the Fortune 500 has lined up behind these initiatives, at least publicly. "Given the scale of the problem, and the time we have to deal with it, we need them all," he said.

Based on DGA’s research, the We Mean Business Coalition has the strongest Fortune 500 support: 78 members. (As of this writing, 870 companies are behind We Mean Business in total.) In addition, the momentum behind the Science-Based Targets Initiatives is building: As of early March, 52 members of the Fortune 500 had approved targets.

Given the scale of the problem, and the time we have to deal with it, we need them all.

It should be noted that many of these initiatives are interconnected in some way. For example, most of the 14 noted supporters of the Advanced Energy Economy, established to help influence policy that encourages the adoption of renewable energy and storage technologies, are also members of REBA.

As you might expect, the technology sector boasted the most participation when it came to supporting these initiatives, with 17 companies. But financial services firms and food and beverage businesses followed closely, with 15 and 13 committed organizations, respectively.

On the other end of the spectrum, AECOM is the only firm represented from the engineering and construction sector; there are just two transportation companies (UPS and United Continental Holdings); and only four energy businesses (Edison International, Exelon, NRG Energy and Pacific Gas & Electric).

Some companies that one might expect to get behind public campaigns of this nature given the programs and sustainability investments they have disclosed in the past — such as AT&T, Marriott and the Walt Disney Company —  are supporting just one so far.

On the flip side, there were also some signs of leadership from unexpected places. For example, casino operator Las Vegas Sands Corp. — owned by Trump supporter Sheldon Adelson and a fighter of clean energy policy in Nevada — is involved with both the Science-Based Targets Initiatives and We Mean Business.

Editor’s note: The DGA’s Corporate Climate Tracker is updated on an ongoing basis. Check back for exclusive, periodic updates.