The industry’s biggest computer hardware and gadget manufacturers have been pretty quiet about their commitments to accounting for natural capital — aka the environmental costs related to their business activities.

That’s not to say they aren’t experimenting with recovery and reuse initiatives. Dell and Hewlett-Packard have been particularly innovative about creating closed-loop processes for putting recycled plastics back in service. It’s just that with the exception of Dell, no one company is really talking about these programs from a global perspective. At least not publicly.

It actually turns out the computer and electronics industry as a whole does pretty well when it comes to limiting its impact on natural resources, such as water and precious metals such as gold, silver and platinum.

The cost is an estimated $39 million per every billion dollars in revenue, according to a recent analysis by Trucost on behalf of the Greener Electronics Council, the organization behind the EPEAT green products registry. That compares with an average of $194 million for other sectors.

But there’s a compelling financial case to do more, especially when it comes to recovering precious metals. Increasing the recycling rate to 100 percent industry-wide could generate an estimated $10 billion in cost savings and natural capital benefits, according to Trucost. For example, creating better closed-loop processes for reusing gold would have a bottom-line benefit of almost $100 million compared with $14.6 million at current recovery levels, according to the Trucost data. 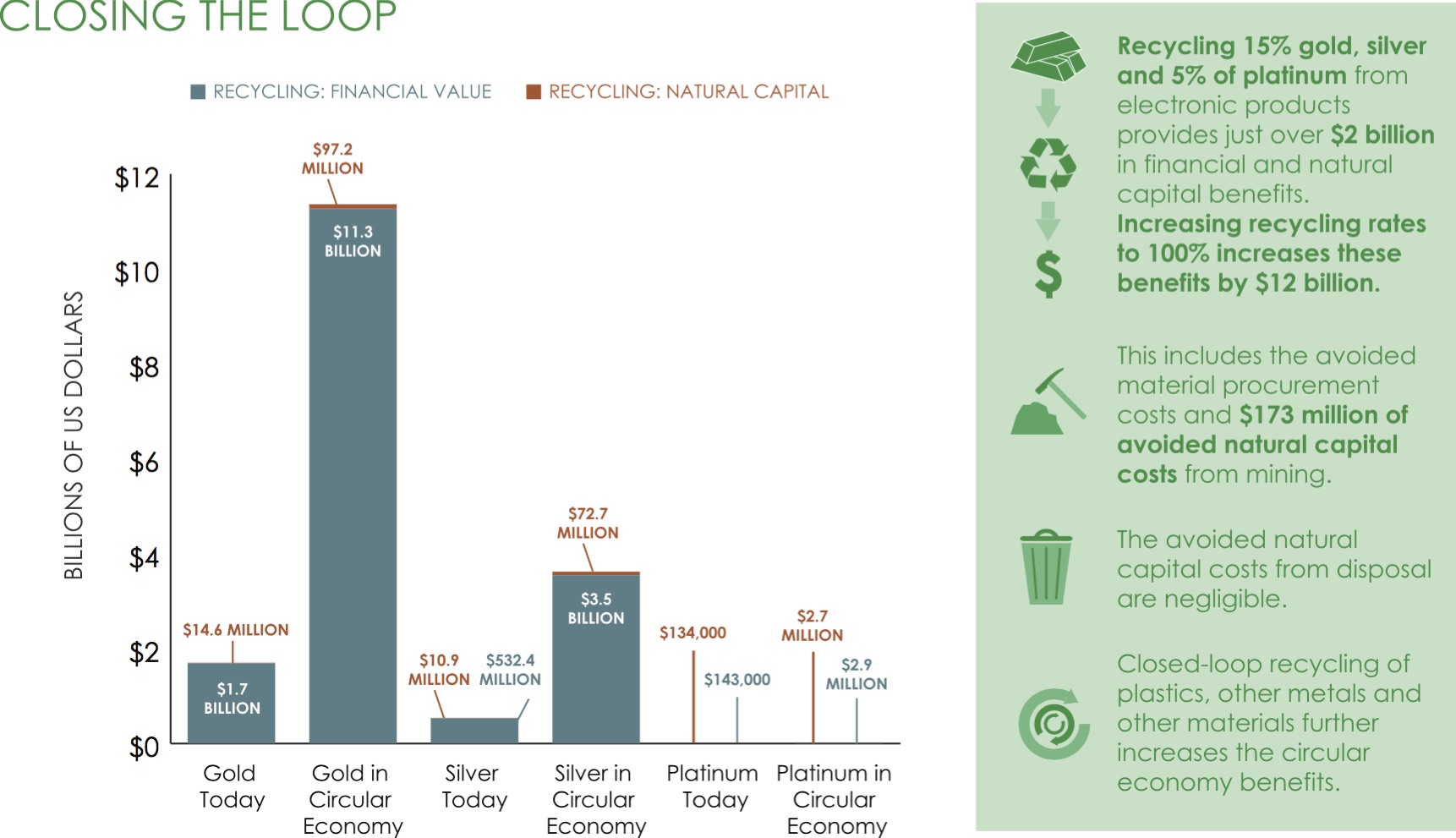 Conversely, the industry is bearing at least $197 million in natural costs associated with electronics trashed annually in the United States alone. The biggest culprit is televisions, which account for close to half of those costs.

"Enhancing product collection is a critical need, with an estimated 75 percent of products being disposed of annually," wrote Libby Bernick, Trucost senior vice president for North America, in response to a question about the findings.

"In addition, new recycling technologies are being develop to recover higher percentages of precious metals from products by companies such as Greene Lyon Group," she noted. "Finally, more product designs are focusing on post-use disassembly so that materials can be separate from one another following product use. We don’t know that any single or several companies is leading on recovering precious metals. Simply getting computers from consumers to the recycling stream is an important step at this point."

There’s no shortage of companies arising to handle electronics recycling (aka e-cycling) programs in some kind of traceable, transparent way. Very few companies have focused on harvesting new revenue out of discarded tech gadgets — Apple, Motorola and Microsoft are among those bucking the trend.

Microsoft and one of its biggest rivals in software, Google, both have accounted for natural capital for several years by setting internal prices for carbon emissions produced by their respective business operations. Microsoft figures it has saved at least $10 million annually through this exercise.

Over the summer, the software giant — which is becoming a far bigger force in the tablet and cloud computing services markets — entered a partnership with the Natural Capital Project to help other businesses include the value of nature in their own business models.

"We hope that by providing access to a growing library of relevant data and cloud-based tools that assess the value of nature to specific landscapes, places and communities, we can help accelerate change," said Microsoft’s chief environmental and cities strategies, Rob Bernard, when the alliance was launched. "These tools have been created based on mathematical models developed and tested by leading scientists in collaboration with end users over the last decade."

One area where you can expect tech manufacturers — particularly those focused on semiconductor fabrication — to spend more attention over the next decade: water scarcity. A company with fabs in Beijing, for example, could see up to 60 percent of its revenue at risk by 2025, according to Trucost’s analysis. Companies in San Jose, California, or Hiroshima, Japan, could face even higher risks.