It's a sunny morning in Berkeley, California, best known for its counterculture and for spawning the free-speech movement. The topics of the day are "co-benefits," cohesion and connectedness.

No, it's not a sociology class at the nearby University of California or a meeting of a local co-op, but rather a briefing on how the city plans to brace itself for climate change, the next big Bay Area earthquake and nagging social conflicts.

“It does not take a lot of research to understand that a lot of the challenges we face are very interconnected,” said Berkeley Chief Resilience Officer Timothy Burroughs. “We live in earthquake country. In addition to physical challenges, we also face chronic social challenges."

While cities from Durban to New Orleans to Medellin are hiring new personnel and talking publicly about the overlapping risks posed by climate change and local social and economic tensions, Burroughs on Friday took Berkeley's efforts a step further by unveiling a new comprehensive resilience strategy.

Among the priorities outlined in the document are the creation of a renewably powered microgrid to serve as a back-up energy source in downtown Berkeley and the development of a solar action plan to supply 50 percent of local power by 2030. The city also plans to invest in more "green infrastructure," building features such as flood-resistant permeable pavement into new projects, along with additional electric vehicle charging infrastructure. 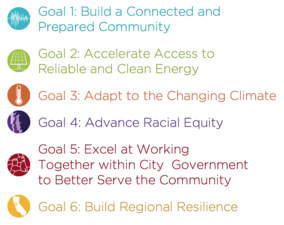 In a nod to the challenges that come with implementing city plans from the top down, the strategy also includes a new Community Resilience Center Program. The goal is to use existing service providers — particularly those that work with underserved minority and low-income residents — as conduits for disaster recovery education and training.

Earthquakes, wildfires, sea-level rise, drought, flooding and racial inequality were identified as the city's most pressing risks to stability. Roughly 1,100 stakeholders from the city of about 119,000 people weighed in on the report.

Among the research that went into the plan: evaluation of gaps in water, energy and seismic infrastructure; sea-level rise impact projections; analysis of the effectiveness of current disaster preparedness programs; a year-long training on barriers to racial equality and identification of regional issues to be tackled in tandem with neighboring cities.

The group, which is also working with nearby Oakland and San Francisco on similar resilience strategies, previously supplied funding to hire Burroughs to the new full-time resilience role and organized a trip for Berkeley officials to travel to Rotterdam to learn more about the European city's approach to sea-level rise.

Still, Berkeley, like most other cities, does not have a designated resilience budget. In that way, the new resilience strategy functions as part city planning document and part fundraising pitch for state, federal and private sector financiers.

Burroughs said much of the assessment that went into the report was made possible by "leveraged relationships" with institutions such as the resident Lawrence Berkeley National Laboratory and U.C. Berkeley.

Looking ahead toward implementation, the California Energy Commission tenatively has named Berkeley the recipient of a $1.5 million grant related to the microgrid element of the plan. A subsequent phase of the grant program could put $8 million to $9 million up for grabs.

"There’s so much space for innovation there," Burroughs said of the microgrid space.

Berkeley is targeting 2018 for the launch of what the city is calling a "clean energy micro-grid network" to replace outmoded diesel generators as a back-up power source for one or more buildings.

It is not yet clear exactly how or where the system would operate, but California utility PG&E, Lawrence Berkeley lab, the California Public Utility Comission, the California Independent System Operator and mega-contractor AECOM are all listed as prospective partners in the effort.

Of all the areas covered in the report — energy, water, transportation, etc. — Burroughs called the city's microgrid ambitions "probably the example that’s most ripe for public-private partnerships."

However, the issue of grid reliability also brings to the surface much bigger questions about the future of energy in Berkeley and many other places.

What role will the utility play, versus the government or some other additional party that can help manage a more decentralized energy system?

While PG&E has been game to experiment with microgrids, electric vehicle charging infrastructure and other isolated renewable energy projects, utilities everywhere are grappling with how their business models may have to evolve to incorporate energy generated by residential solar arrays, commercial on-site renewables or EV chargers, to name a few examples.

"What role will the utility play, versus the government or some other additional party that can help manage a more decentralized energy system?" Burroughs said.

While the city wrestles with new models to finance and build out microgrids and other localized resilience projects, Burroughs said Berkeley also will need to work with neighboring cities such as Oakland and San Francisco to respond to overarching issues such as ongoing social and economic turmoil stemming from unaffordable housing. Berkeley's median home value, for instance, was $719,500 the last time the U.S. Census Bureau calculated in 2014.

San Francisco braces for the Big One with microgrids