This article first appeared at GreenSportsBlog.

The green-sports movement not only grew in 2014, it matured. Growth came from new LEED-certified stadia and arenas and from many more zero-waste games. Maturity came from the fact that greening is increasingly the rule rather than the exception. With this maturity comes responsibility. Our responsibility is to offer readers a Best and Worst of Green Sports in 2014, with the hope that it will inspire other sports organizations to make sustainability a priority in the coming year.

The National Hockey League broke new ground with the issuance of the first sustainability report sanctioned by a North American sports league. You really should read it if you haven’t already done so. The report is rigorous — it measured the league’s CO2 footprint from Scope 1 (direct), Scope 2 (indirect) and even some hard-to-get-at Scope 3 (other indirect) emissions, such as NHL League and Club business air travel, as well as waste disposal at NHL arenas and offices. And, as the saying goes, “what gets measured gets managed”: Measured league greenhouse gas emissions declined 28 percent from the 2011-2012 to 2012-2013 season.

But that’s not even close to all. As reported in GreenSportsBlog last week and across the media landscape (check out this Washington Post piece), the NHL announced that, in partnership with Constellation Energy, it will offset all of its carbon emissions from the 2014-2015 season, through the purchase of Green e-Certified Renewable Energy Credits and Carbon Offsets. No other league has come close to the standard set by the NHL.

While the 49ers were a disappointment on the field, at least their less-than-stellar play took place at our greenest new stadium. Levi’s Stadium, the club’s new LEED Gold home in Santa Clara, which opened in August, gets major plaudits for its green roof, recycling 86 percent of its water, on-site solar, access to mass transit and many other greening features. That greenness, which has set the bar for all new stadia going forward, will be on display for the world to see when Levi’s Stadium hosts Super Bowl 50 in February 2016.

Best team (greening-wise) on and off the field

Ohio State University (or, to Buckeyes fans, THE Ohio State University) will play in the first college football playoffs on New Year’s Day vs. Alabama. That is a big deal. Perhaps an even bigger deal (or to Buckeyes fans, a close second) is that Ohio State’s seven home football games this season were zero-waste, which means 90 percent or more of the waste produced by over 106,000 fans at Ohio Stadium (aka The Horseshoe) was diverted from landfill. Even if the Buckeyes don’t prevail vs. the Crimson Tide, they win the best team on and off the field in a rout.

What were the Atlanta Braves thinking? I’m not talking about their artist’s rendering of their planned new stadium, SunTrust Park, scheduled to open in 2017, that showed the Braves losing on the scoreboard. Honest mistake, that. 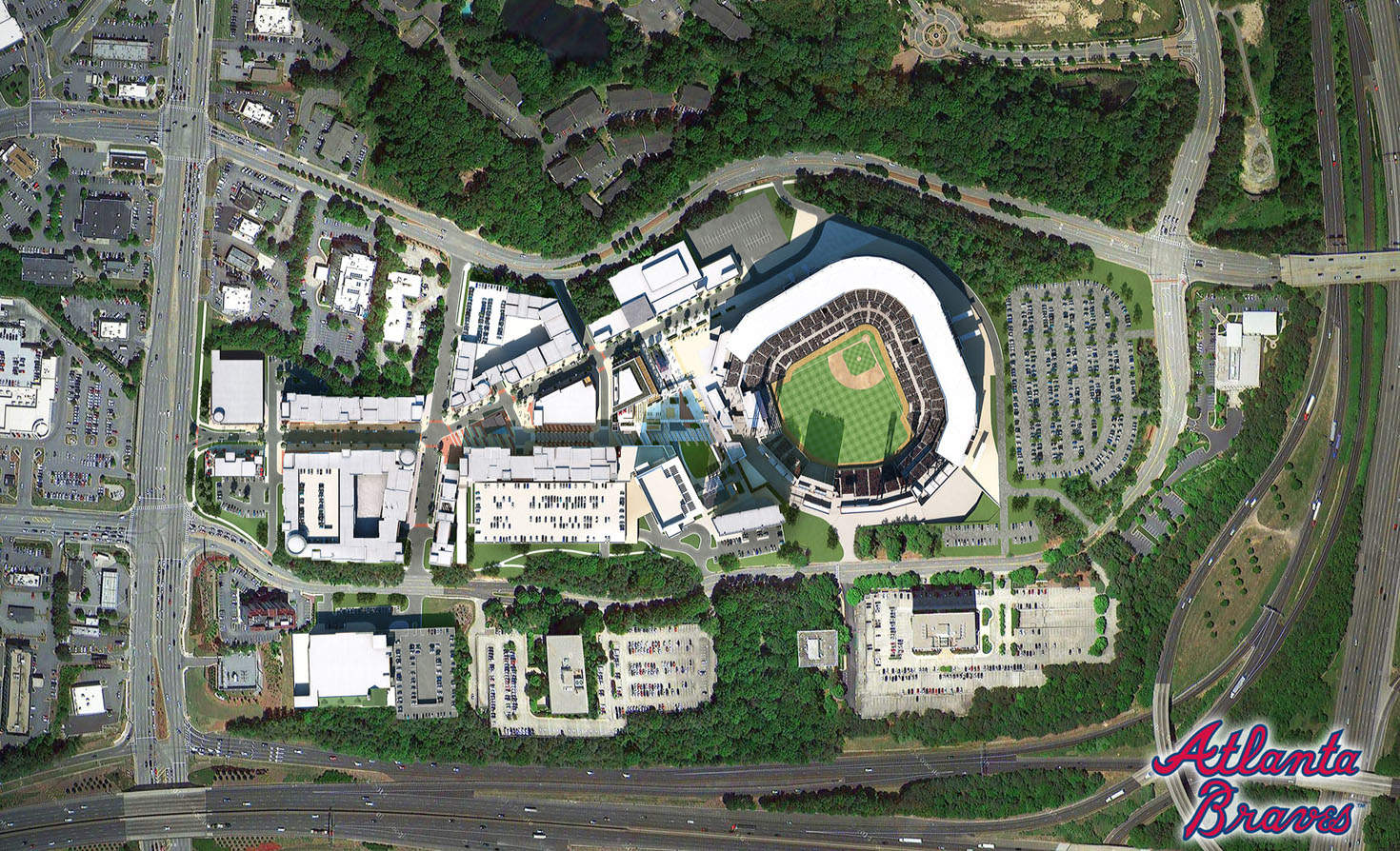 The Atlanta Braves organization is bulding the team's new Sun Trust Park in the suburbs at the intersection of two bustling highways and far from the MARTA light rail system.

No, what garners the Braves this unwanted but deserved award is that the club decided to buck the trend of building stadia and arenas in urban areas, close to mass transit. Instead, it is moving to the suburbs, in Cobb County northeast of downtown Atlanta, next to the confluence of two already super-crowded highways, I-85 and I-285. There will be bus access to the new ballpark and maybe a trolley line but, unfortunately, the MARTA light rail system does not go anywhere near the stadium. When one considers that transportation is, by far, the largest source of carbon emissions associated with sports events, one has to think Braves management either didn’t factor sustainability and the environment into its decision on the stadium site, or it did think about it and decided sustainability is not a big deal. I’m not sure which is worse.

And the thing is, the club’s current downtown home, Turner Field, is at least somewhat close to a MARTA line. It is a 20-minute walk from the closest stop to the ballpark, true. But frequent shuttles take fans to the stadium from the station.

If the Braves were interested in greening, they would’ve built their new stadium closer to MARTA, not further away. But greening seems not to be part of their stadium site calculation, or, to be part of any calculations, as nothing about sustainability is on the new stadium website. Wait, they do list “lack of consistent mass transit” as a reason for leaving Turner Field, yet they go to a place with fewer mass transit options (maybe they are more reliable? Who knows). Yikes! The Braves clearly have earned their "least green new stadium project" designation.

Sports greenwash of the year

The Olympic Winter Games in Sochi, Russia, in February easily won this award. The Sochi Organizing Committee and its enablers at the IOC made grand proclamations about the greenness of the Games in the run-up to the Opening Ceremonies. The reality? Let’s just say if the Sochi Olympics were green, I’d hate to see what a brown Olympics would have looked like.

To get the full emptiness of Sochi’s green promises, click on this Time Magazine story. Or this from The Guardian. Or this one from GreenSportsBlog. You get the idea.

The greening of Forest Green Rovers, a soccer/football club in England’s fifth level (the baseball equivalent would be A-League or Rookie League ball), is not the biggest green sports story of the year but it’s certainly the best. Club Chairman and “Zero Carbonista” Dale Vince also owns Ecotricity, an innovative clean energy/energy efficiency company based in Stroud, England.

Vince has taken Ecotricity’s disruptive, anything-green-is-possible ethos and applied it to the operations of FGR. From the first meat-free concessions menu in sports (hard to imagine, right? FGR reports that, after some initial grumbling, fans actually are fine with it) to searching for lighting technologies more efficient than LEDs, from the world’s first organic field to electric vehicles for all of the players, Vince and FGR are demonstrating that what the sports world thought was green is not green enough. Going forward, Vince looks to take the FGR approach to bigger clubs. That’s a story for 2015. For 2014, Dale Vince and Forest Green Rovers are, without doubt, the best green sports story of the year.

The best and worst of green sports in 2015