Conserving energy has expanded beyond the realm of social and corporate responsibility. For many employers, sustainable practices are a necessity to attract and retain the best labor. At those firms, workers may expect their employers and workplaces to earn and display Energy Star, LEED and other certifications to demonstrate good stewardship of natural resources.

However, some properties might be at risk of losing at least one of those credentials.

Later this year, some buildings certified under the Energy Star program likely will lose that certification after the release of updated building performance baselines. Fortunately, landlords can act now to begin improving the metrics tracked in Energy Star’s online Portfolio Manager tool and put their properties on a path to qualify for the program’s mark of approval even after the change.

For most commercial properties, an Energy Star score ranging from 1 to 100 indicates how well the property compares with a sampling of thousands of buildings represented in the Commercial Buildings Energy Consumption Survey. The Energy Information Administration, which collects and analyzes energy statistics for the U.S. government, conducts the survey every four to six years. The Environmental Protection Agency (EPA) uses survey data to build statistically representative models for various building types.

Owners and tenants whose downgraded scores result in the loss of Energy Star certification will lose the marketing benefits that come with this seal of approval.

When an Energy Star participant submits energy-usage performance data collected through Portfolio Manager, the EPA converts that information into a numerical Energy Star score showing how well the building performs in relation to models of its peers. Buildings that achieve a 75 or higher generally qualify for Energy Star certification as energy-efficient.

In the decade between the surveys, the use of Portfolio Manager mushroomed, as did the number of commercial buildings adopting various energy-conservation programs. That suggests the new data set will include a larger proportion of energy-efficient buildings. As a result, a building that achieved the Energy Star label in the past may not compare as well to buildings in the new data set, and could see its score fall due to a lower relative standing even if the property’s performance remains unchanged. 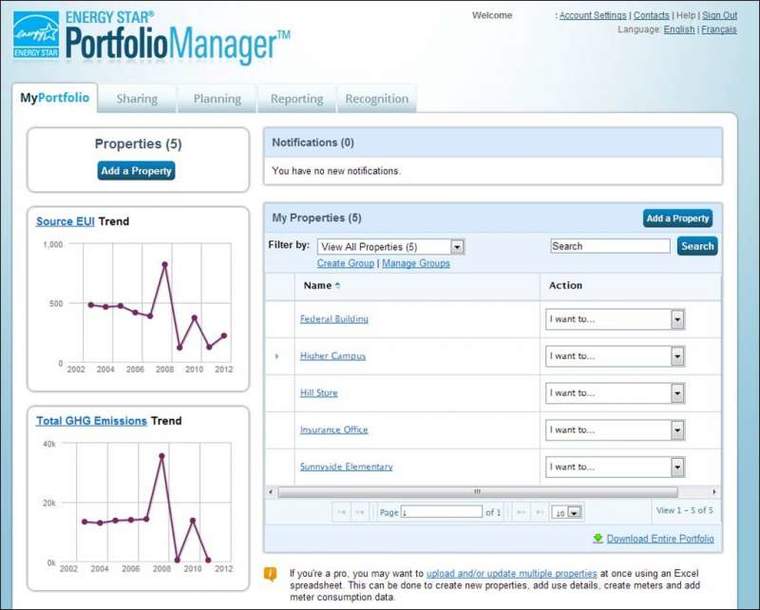 <p>A snapshot of an earlier version of the Energy Star Portfolio Manager.</p>

The EPA plans to publish updated scores based on the newer survey in August. While there is no way to predict the change in score for a specific property, building owners should be prepared for a drop of at least five points in their Energy Star score. Buildings certified with scores of 75 to 80, therefore, are most at risk of losing certification

It’s important for property owners to remember that Energy Star scores are a mark of relative performance. Actual performance measured in Portfolio Manager is unaffected by the update in survey data.

Improvements achieved through conservation programs continue to benefit the property’s owner and occupants, and can include less-intensive electricity usage, lower utility bills, a healthier workplace that maximizes natural light, and in some cases, reductions in water consumption and waste generation. These worthwhile programs will continue to save money and improve an asset’s appeal to tenants and investors.

We are entering a new phase in energy conservation where the goal may be more than a lower utility bill.

Owners and tenants whose downgraded scores result in the loss of Energy Star certification will lose the marketing benefits that come with this seal of approval from the EPA, potentially lowering their competitive advantage in attracting and retaining tenants. Employers who consider Energy Star a requirement for their space may look to other properties in a site search, or if they are already a tenant in the building, may let their leases expire.

In most cases, the first phase of energy conservation will have captured the low-hanging fruit of reducing weekend operations, optimizing equipment run schedules or converting some lights to fluorescent. Sustainability advisers can help landlords map out strategies to further reduce energy consumption.

Deeper cuts in power usage are more likely to require larger capital investments for items such as high-efficiency light fixtures and mechanical equipment. Yet many landlords will decide that achieving greater efficiency is worth the monetary cost. Becoming educated on the costs and benefits of improvements may be more important than ever.

We are entering a new phase in energy conservation where the goal may be more than a lower utility bill. Landlords and tenants are collaborating to forge a workplace that is grounded in the tenets of sustainability and a source of employee pride.