Led by Unilever, AstraZeneca and Nike, consumer brands are taking climate change more seriously than ever, says a new report from Climate Counts, a nonprofit that rates some of the world's largest companies on their climate impact.

Big companies are reporting emissions, committing to targets and becoming more vocal in the policy arena, according to the report.

"There's evidence to suggest we have reached a remarkable tipping point," says Mike Bellamente, project director of Climate Counts. "Global corporations are increasingly acknowledging climate change as reality and are adopting measures to reduce their emissions and environmental impact."

This is the fifth report from Climate Counts, which is the brainchild of Stonyfield Farms CE-Yo Gary Hirshberg. 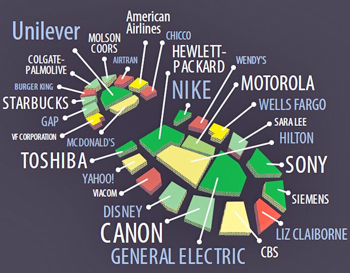 The ratings are intended to make consumers more aware of leaders and laggards on climate -- the term of art for this is "rank 'em and spank 'em -- as well as to spur companies to do better.

For whatever reason, companies are improving: Bellamente told me over the phone the other day that the average score for the 136 companies rated this year is up by an impressive 54 percent from the initial set of ratings.

This is nice to hear but the news comes with a big caveat. If there's one thing we've learned from this past decade of growth in both "green" talk and carbon emissions, it's this: Voluntary corporate behavior won't produce an adequate response to the climate crisis. Indeed, it has not: Greenhouse gas emissions rose by record levels last year. "We haven't made (climate) progress as a society," Mike acknowledges. Only climate policy will bring meaningful progress.

The trouble is, even companies that have adopted their own sustainability programs are not as active as they need to be in the policy and political arena. Climate Counts reports that 30 of the big companies it ranks expressed strong support for federal level climate policy, but 82 companies (or 60 percent) remained silent or in opposition of such efforts. The companies in the survey don't include stalwart opponents of climate regulation -- the coal, utility and oil companies -- and so it actually overestimates the degree to which business supports climate action.

Still, as more companies acknowledge the reality of climate change and reduce their own emissions, this will help set the stage for better policy.

"Many companies are performing well," Mike told me. "Sustainability is integrated as a philosophy across their business." Prominent examples include Unilever, this year's No. 1 company with a score of 88 out of 100, and Nike, with a score of 85, which topped the list last year. (See my blogposts, Unilever CEO: Don't stay on the sidelines and Nike: Running towards sustainable consumption.)

Amazon and Apple are among the laggards in the Climate Counts ratings. That may surprise you because both are innovative companies, and tech companies generally score well on green behavior, but it shouldn't. Amazon is all but invisible on the climate issue, scoring a meager 11. "There is little evidence to suggest that Amazon has a management plan in place to account for emissions, reduce their overall environmental impact or report on their progress," Mike told me. (Not coincidentally, my friends in Seattle tell me that the company plays a minimal role in the sustainability conversations and civil life of the city, in contrast to Microsoft, Starbucks, Costco, REI, etc.) I emailed Amazon for a reaction, and haven't heard back.

Apple does far better, scoring 60 out of 100, but it still places last in the electronics sector, behind leaders Siemens, HP, IBM, Nokia and Sony. "Unlike corporations of similar size, they fail to disclose a formal company-wide emissions reduction target," Mike says. Nor does Apply publish a sustainability report.

Rising up the charts were Wyndham Hotels and Resorts, Amgen and VF Corp. Wyndham Hotels surged 30 points to 57 by launching a green initiative, topping Starwood (48), Hyatt (36) and Hilton (22). Pharmaceutical company Amgen rose 29 points to achieve a score of 57, and VF Corporation, which owns such brands as Nautica and Wrangler, gained 13 points to lift its score to 34.