Amid the looming sustainability challenges of our time is how the world will feed 2.5 billion more people in a few decades — even as rising sea levels and warmer temperatures take away some arable land.

One answer is bringing Big Data to the rescue.

Farm productivity will need to increase and food waste decrease if 9 billion people are to have enough food to survive.

And those productivity gains will be most needed in developing nations in Africa, southern Asia and Latin America where population gains are expected to be the fastest, according to the United Nations.

Yet in developing nations, the food supply comes mostly from the tilling of smallholder farms — farmers with a few acres who generally rely on rainwater as irrigation.

As tech innovation took up agriculture this year — attracting a record $2.06 billion in venture capital investment in 228 ag tech deals during the first half of this year — a plethora of new agtech products emerged. But very few new agtech tools are for smallholder farmers, especially those without computers, sensors, iPad-equipped tractor — or even electricity, according to AgFunder, which tracks agricultural and tech investment. Most, according to AgFunder, target data from soil using sensors that sophisticated and well-heeled farmers can use to monitor conditions.

"Many of the options out there today target the very large operations in the U.S., which will likely be much more complex, with more equipment and teams than smaller operations. So how does a technology address the needs of both big and small operations?" wrote AgFunder author, agriculture professor Lauren Manning.

Now, however, a B Corp. that specializes in data intelligence for agriculture, aWhere, is pairing with software development platform company Apigee to offer applications smallholder farmers can get via text messages on their cell phones. It turns out that while smallholder farmers in the developing world often don't have computers or smartphones, they do have cell phones.

The two companies also are opening up the agriculture and weather data platform to application developers to create other tools for farmers and food companies, targeting smallholder farmers.

"There are 580 million farmers in the world and most of those are smallholder farmers," said Stewart Collis, founder and CTO of aWhere. 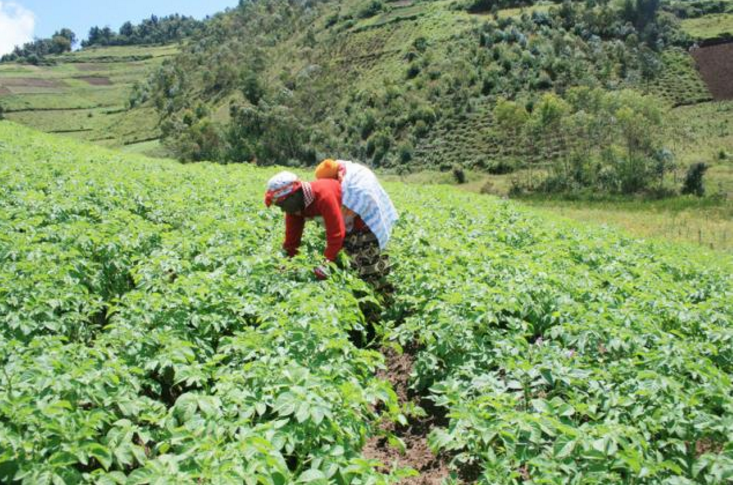 His belief is that if smallholder farmers get timely information on weather forecasts, weather patterns and regional market conditions, they will make better decisions, which in turn will boost their harvest productivity.

So aWhere, his 16-year-old data intelligence firm that collects and analyzes billions of pieces of data around the globe each day, is joining with Apigee, an API software platform company to offer a platform for application development for apps that help smallholders and is releasing its own apps.

"Farmers need to make decisions in the next few days" when something happens such as an unexpected rain — or a prolonged lack of rain, Collis said. They need to know if planting now or two weeks from now is the wiser choice, he said, and the difference can have dramatic consequences on their harvest. So with a product that "bridges the gap between short-term weather forecast and long-term climate models," farmers will have tools to make decisions

"We’ve developed a platform that is two parts," Collis said. "One is a global Big Data technology on weather all over the world, pulled from multiple sources, such as the National Doppler Weather Sites" and also regional satellite radars in areas where the Doppler system doesn't reach. "We pull all that data and produce weather forecasts down to the field level" and extending out 15 days. It also includes historical weather trends and mathematical predictions out to 20 years.

That app is called Weather aWhere, for field level weather and agronomic information.

All sorts of better decisions can be made by bridging that gap between short term weather forecast and long term climate models.

The second product is an open source Community Development Platform which gives software developers access to aWhere's APIs and Apigee's platform for creating their own applications.

The two companies don't intend to market to smallholder farms directly but rather to the agricultural service companies and regional farm agencies that they work with.

"Emerging markets are a challenge because a lot of farmers don’t have access to websites and smartphones. But they do have cell phones," Collis said. "So, one way to send farmers information is to send out SMS texts to small farmers. Our customer may be the agricultural services companies that provide ag services to farmers in Ghana. They push out text information to their farmers and they also have a call center, so farmers can call into find out information."

Its Weather aWhere and Community Development Platform also will be marketed to commercial agriculture companies in the U.S. and Europe as well as consumer packaged food companies. "Anyone who has to do with food industry. We can provide them a global view of what is happening at field level," he said.

But having grown up on a farm and as a former aid worker in Kenya where he provided farmers with data to help them make decisions, Collis has a personal passion to help smallholder farmers.

So the agricultural service company is one target market in emerging nations. "The other is telecommunications companies," he said.

He said aWhere and Apigee are in the final stages of negotiating another big telecommunications contract with another wireless company for its new products.

The Apigee intelligent API platform is sold to large businesses to use APIs to securely share data and services across devices to serve customers in real time, according to the company. In a statement, an Apigee vice president said the agriculture world is ready for this.

"Agriculture is being revolutionized by new information about farming and mobile applications, and aWhere's targeted, real-time agronomic and weather data is helping take AgTech to the next level."

These 21 projects are democratizing data for farmers