Sequencing the human genome was a massive scientific breakthrough for researchers trying to understand the inner workings of the human body and how it responds to biological threats such as disease.

What if that same micro-level scrutiny was applied to the raw materials that make up the global food supply chain?

That is the question that executives at Mars and IBM are asking with a new initiative to collect data from microorganism samples at Mars facilities, then allow IBM researchers to analyze that data for insights on food safety vulnerabilities. The new Consortium for Sequencing the Food Supply Chain comes after the companies previously collaborated on a $10 million project to sequence the cocoa genome.

“Genome sequencing serves as a new kind of microscope," said Jeff Welser, vice president and lab director of IBM Research-Almaden, in a statement. “By mining insights from genomic data, we’re seeking to understand how to identify, interpret and ultimately create healthy and protective microbial management systems within the food supply chain.”

From a business perspective, the effort is about mitigating supply chain risk and improving consumer perception of food safety standards — two variables increasingly difficult to control in a globalized economy.

"We’ve got 130 factories in different parts of the world," Mars Vice President of Corporate Research and Development Dave Crean told GreenBiz. "As we look around through food supply chains, there are significant challenges to food safety."

Even in the United States, where food safety reporting guidelines and health inspectors are strict, one in six Americans experiences a foodborne illness each year, according to the Centers for Disease Control. The World Health Organization can't even reliably calculate (PDF) how many people that diseases related to food contamination kill each year in developing countries, where regulations and safety procedures are often more lax.

Beyond the human toll, healthcare and product losses linked to foodborne illness costs tens of billions of dollars annually in the U.S. alone.

Despite large-scale industrialization of food production in many parts of the world, the specific risk factors linked to microbes in growing environments, factories and other facilities that house our food are not well understood — especially in remote areas.

Getting a handle on disease risk factors becomes even more important when considering that global bodies such as the U.N. estimate that food production (and clean water supplies) will have to increase dramatically to keep pace with population growth. While advanced agriculture techniques and controversial genetically modified foods are two areas attracting lots of attention, seemingly rudimentary food safety often already is overlooked.

"Safety problems arise because raw materials, ingredients and finished foods pass through the supply chain more quickly than they can be tested," noted one paper on the topic (PDF) by Unilever and the Netherlands' Utrecht University.

To help combat that dynamic, the new Mars and IBM corsotium will analyze the "genetic fingerprints" of bacteria, fungi and viruses that grow either directly on raw materials or in semi-controlled environments such as factories or kitchen countertops. The goal is to enlist new partners in the consortium over time, such as universities, farmers and other food manufacturers, to expand the scope of the research. 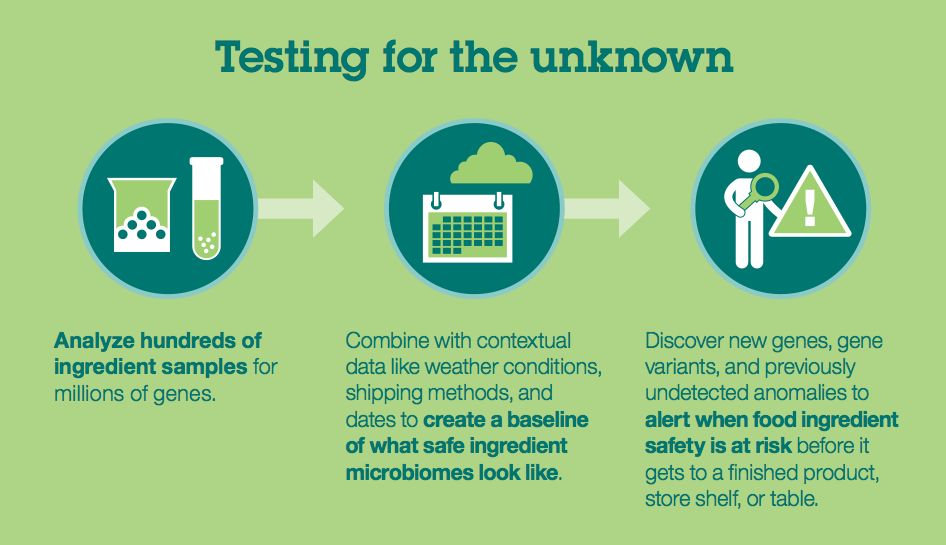 It's also worth noting that the University of California, Davis — coincidentally (or not) Mars' partner on a new $60 million food innovation institute targeting "Silicon Valley-type breakthroughs in food, agriculture and health" — is also at work on a somewhat-related project to sequence 100,000 genomes of pathogens linked to food security.

"One of the applications we think might play out is we think it might help improve traceability," Crean said, referencing the push also occuring in sectors such as retail to better understand granular supply chain risks and opportunities for improvement.

He added that detailed data on the science at work with raw materials could provide "almost a forensic microbiology capability,” potentially allowing the company to expand in areas where there currently might not be enough information about safety risk factors to operate.

Ultimately, Crean sees food supply chain safety issues as a challenge that will require much more legwork to address.

"This is about building trust on an industry level," he said. "You can only tackle these issues on a collaboration basis. It’s very much early days, but we think there’s huge potential."

Learn much more about sustainability at Mars and supply chain transparency at the upcoming GreenBiz Forum 15.