What has until now been called green business, or sustainability, cannot be a side department or a niche conversation in commerce. Instead, we must pivot — sometimes painfully, always purposefully — so that solving the world’s biggest challenges profitably becomes the core pursuit of business.

We’re now testing the limits of all the natural systems that support our economy and society. Thus, we need to establish a new paradigm for how companies operate. If this hotter, scarcer, more transparent and unpredictable world is the new normal, then how must companies act to ensure a prosperous future for all, including themselves?

Asking whether it makes business sense to tackle the mega challenges is no longer the relevant question. Instead, we must ask ourselves some new core questions, such as, “What do we need to do to manage our businesses effectively in light of these challenges?” Then, and only then, do we figure out how to profit massively from the journey. Profits will still drive much of corporate action — an unprofitable model won’t survive — but ultimately it’s ludicrous to prioritize short-term profit at the cost of our very survival.

We need a major shift in perspective to see that we can deal with the challenges profitably. It’s a both-and argument, not the usual false either-or hurdle that’s placed in front of advocates for change. Organizations no longer can afford to address massive issues like energy, climate, water and global development and poverty only when every initiative on the table meets some predetermined, somewhat arbitrary hurdle rate. We have to flip these priorities on their head. That’s the Big Pivot … and it’s nonnegotiable. 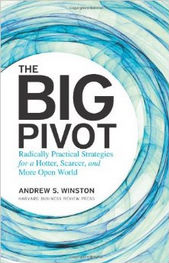 Big-Pivot strategy represents a major shift in consciousness for the private sector, but it’s not entirely radical. In fact, this kind of thinking is highly conservative, with a major dose of self-interest. We need to conserve the planet’s capacity to support us for our own good.

So consider this second core question: If we start from an assumption that we must solve massive challenges to ensure our survival, and then we work back from there to find profitable models, what would a company look like? (This is, critically, distinct from how we operate now, where we start with profit maximization first and then get to environmental and social issues when we decide it’s “affordable.”)

The companies of the near-future will do many things differently to bring about, operate successfully within and profit from a new reality. Successful leaders are already starting to pursue a new agenda and set of principles, including the following:

• Fighting the short-term focus that distracts business from creating value. Leaders need a much deeper concept than just earnings (which is one particular, warped and narrow view of business success). Executives will worry a great deal more about customers and communities than about stock analysts. Unilever, for example, no longer provides quarterly guidance to Wall Street, greatly reducing its time spent “talking up” the stock and, instead, freeing up management attention to focus on products and customers.

• Basing company goals on science and the targets we all must hit. Organizations must set big goals — like a drastic reduction in carbon emissions globally (perhaps by using only renewable energy) or operating within local water availability limits — based on what science is telling us.

Companies no longer simply can follow a bottom-up exercise to discover what they think they can do. Ford is just one example of a company setting its product development goals on the basis of global climate science.

• Systematically asking heretical questions. Executives and employees at all levels need to challenge everything, from processes to the way we innovate (openly, not in private) to business models to capitalism itself. A few leaders, such as home improvement retailer Kingfisher in the United Kingdom, are exploring whether they can, through their operations, improve the environment, going beyond the goal of just zero impact and making their enterprises regenerative.

• Helping to craft and promote governmental policies. Smart, proactive regulations really can move the needle on the mega issues and level the playing field. Instead of fighting all regulations, companies like Nike and Starbucks are calling on government to pass aggressive carbon legislation.

• Collaborating with unexpected partners. Companies must take a more strategic view on how different stakeholders can help make them successful, including seeing employees, customers and maybe even the fiercest competitors as partners and cocreators. If Coca-Cola and PepsiCo can share the burden of finding new, lower-emitting technologies for keeping drinks cold, anyone can work together.

• Using new tools to put numbers on benefits that are hard to value. Putting a number on intangibles — those things that create value but we don’t measure well — can help companies make smarter investment decisions. Companies ranging from Johnson & Johnson and IKEA to Diversey and 3M are finding ways to modify their return on investment calculations to drive investments in efficiency and renewable energy. And estimating the value that nature provides a business — as Puma and Dow have done — can help companies better understand, for example, our dependency on clean water or on having an atmosphere to dump carbon into. These exercises will help companies prepare for the day when these so-called externalities quickly become internal costs (or benefits).

• Setting out to build resilient and regenerative (not just profitable) businesses. A resilient organization can handle deep change and is decoupled from resource use and reliance on the physical capacity of the world. Nestlé and Unilever, among others, are attempting to grow while holding their environmental impacts flat — and they’re succeeding.

At its core, the Big Pivot mind-set is about prioritizing environmental and social challenges and opportunities and treating them as central to business success or failure, not as philanthropy or niche issues. This means funding and supporting these initiatives like the high priorities they are.

The mind-set also means understanding not just value chains, but systems, and looking to nature for successful business and operational models (usually ones that are circular, where resources are valued highly and don’t go to waste). A food company, for example, will need to consider how what many are calling the “nexus” of food, energy, water and security interact in each growing region and what those connections mean for the business.

None of these principles or approaches is necessarily easy, but they are required for success and thus certainly will be more profitable than doing nothing. At a macropractical level, on a planet that’s under more stress than it can take, no business can profit. Or as a tech executive put it to me memorably, “Nobody will care what operating system they have if they can’t eat.”

This is an important point to remember and one that often gets lost in a discussion about tackling big environmental and social challenges: none of the core strategies or principles of the Big Pivot are really about “saving the planet.” Our Earth will be fine with or without us. As comedian George Carlin once said, “The planet isn’t going anywhere. We are! … The planet’ll shake us off like a bad case of fleas.”

No, this is about humans — all 7 billion of us and counting — and our ability to survive and thrive.

What’s in It for you?

Of course, survival itself is a good payback. But more seriously, if we can redefine what good management and strategy look like in a hotter, scarcer, more open world, we will clearly reduce some large-scale risks to our businesses and society (Scientific American recently reported that floods alone could cost the world’s cities $1 trillion annually by 2050). And there’s another significant upside. The case for meeting these massive changes head-on has a hard-nosed, number-crunching, good-for-business logic behind it. It’s not pie-in-the-sky or naive; it’s the most realistic solution.

Creating a healthier, cleaner, more stable and more equitable and just world — with business using its enormous resources and skills to lead the charge — will drive the global economy forward.

In fact, some brave leaders among the large public companies of the world are already well on their way. They’re realizing that this pursuit represents a multi-trillion-dollar opportunity to reconceive how we design, manufacture and deliver buildings, transportation, energy and much more. In the words of billionaire entrepreneur Sir Richard Branson, tackling climate change is “one of the greatest wealth-generating opportunities of our generation.”

How can this be? It’s important to remember that the problems we face, no matter how large, are just constraints on a system. And constraints propel innovation, new thinking and new business models, which make a lot of money for the fast movers. My goal then is to establish what companies need to do, not just to survive in a world with so many new challenges and constraints, but to thrive. How will we as a society create a system that provides for those 9 billion people, in ways that use drastically less stuff, produce no carbon, preserve water for everyone’s use and result in no waste or toxicity, all while paying people fairly for their work?

The private sector can and will provide many of the answers. The companies (or communities, cities or countries) likely to come out on top by making the Big Pivot will be more flexible, resilient and better able to weather whatever storms the economy and planet throw at us.

Reprinted and adapted by permission of Harvard Business Review Press. Excerpted from The Big Pivot: Radically Practical Strategies for a Hotter, Scarcer, and More Open World. Copyright 2014 Andrew S. Winston. All rights reserved. Image of boardroom by suphakit73 via Shutterstock 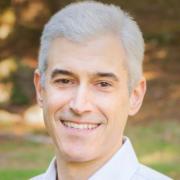