The big swing we need to mainstream sustainability

Concentrating on culture, and the "who" of sustainable change, not just the "what," should be a bigger part of your portfolio.

Mike Stopka was getting little traction for developing the first sustainability strategy for a major university. Now he was meeting with the university’s head of transportation to get her buy-in.

The transportation head gave Stopka — an associate principal at BuroHappold Engineering, advising corporations, cities and institutions on strategic planning, sustainability and culture — a firm stiff-arm in a conversation he remembers well. "Look, I don’t have time for this."

Stopka’s previous failures guided him next. In the past, as a sustainability consultant to large real estate developers, he pitched LEED benefits as if this alone was a motivator. He couldn’t reach them. They were deaf to his sustainability pleas — until he looked inward and realized he was talking about it wrong.

He reflected, "I started to reframe LEED approaches as ways to get higher lease rates for the developers or as ways to attract a different kind of tenant." He started to get more pick up for bolder LEED initiatives.

He learned to go into discussions open-minded, listen to their problems and see if he could shape sustainability answers not as the headline, but as a byproduct.

Stopka learned fast, the new way. "You have to authentically try to solve somebody’s problems. And if you can do that using sustainability as a tool, you’re able to drive it faster, deeper and farther. If you can’t, maybe you don’t have a strong enough solution yet."

His advice? Pretend you can never use being "sustainable" as a reason to do anything. What would you say to convince somebody? Sustainability is not its own reason; it’s just a co-benefit.

As Stopka felt the resistance from the university’s transportation head, he hit the pause button in his head. He knew what to tell her.

He replied: "Look. I’m here because it’s my job to make the university more socially and environmentally responsible and reduce resources. So, that is my goal. But I know that that only works in the long-term if we find something that we can work on together, that will benefit you first and me, second. Just tell me what your problems are, tell me the challenges you’re having and what you’re trying to solve. Not sustainability problems, just problems."

She said, "Fine. You know, I’ve got the alderman who’s angry because I’m taking up all the parking spaces in his neighborhood and his community members don’t have anywhere to park."

She continued. "I’ve got the president’s office that’s telling me they want to put a building where my parking garage is. And I’ve got students and staff and faculty who are saying they want better biking lanes on campus, because it’s not safe."

It’s not always this easy to connect the dots, but the connections between sustainability and the transportation head’s problems were clear.

Tell me the challenges you’re having and what you’re trying to solve. Not sustainability problems, just problems.

Stopka said, "Why don’t we work on some alternative transportation strategies together? We can make the campus more walkable, more bikeable. That will alleviate some pressure on your single-occupancy vehicles, so you’ll make the aldermen a little bit happier. We’ll reduce the university’s emissions. We’ll make it a happier and healthier and better place to be."

A few months later, Stopka and his team got the strategic sustainability plan passed — the first one that the university had had. He was convinced it was because of these kinds of coalition-building conversations that were much more about creating bridges between the departments and getting them to see sustainability as something of value for everybody.

Stopka came to a big revelation: By seeing sustainability as the glue between these internal siloes, you begin to build a culture around it.

Culture is king. Strategy is just a step. How many times does something get on paper as a strategy, but it never moves, mid-management ignores it and no progress is made?

I met Stopka for the first time earlier this summer. He was co-hosting the Chicago "Common Ground" conference. I listened to him talk about how important culture is versus a sustainability strategy. He compared it to the rider of an elephant, and showed a person sitting atop an elephant, with the huge elephant as the force for movement and change, with the rider almost a bystander. 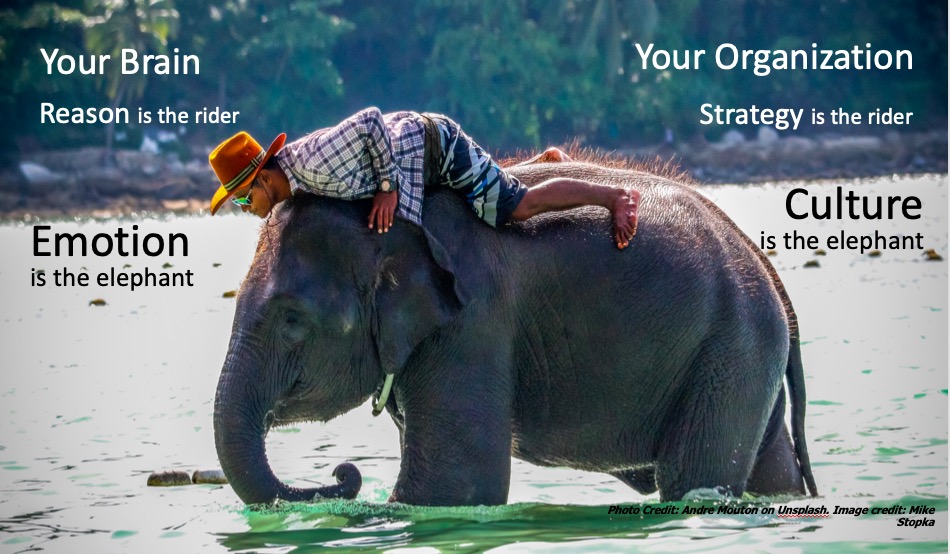 Stopka credits Jonathan Haidt for the original analogy where the rider/reason vs. emotion/elephant was born: The Happiness Hypothesis.

"Brilliant," I thought to myself. This is why so many good-hearted sustainability strategies stall out. The sustainability leader thinks they have reached the ideal destination by getting approval for some big thing, only to ask a year later, "Why is there so little adoption?"

Stopka talked about the key attributes of strategy:

Then he showed the attributes of what really drives change:

Our culture needs to evolve to see sustainability as an opportunity, not a risk, a premium or headache. And culture is all about people.

Where are we with the sustainability movement? We’ve come a long way in the past 30 years. In many ways, it’s an amazing evolution. By other measures, potential outweighs results.

Through experience, Stopka believes sustainability proponents still largely live in the innovator/early adopter segments of the population. We are starting to break through to the early majority, but just barely.

So, we need to shift to create a larger audience, to take up more space on the bell curve.

Stopka says, "We can continue to preach to the choir or, if we decide that we want to reach the early majority and the late majority, which is about 70 percent of the population, they don’t do things for sustainability’s sake. They’re going to do it because it has some other benefit to them. So, I might not be able to take them as deep. I might not be able to get them to do a net-zero building or nth-degree type sustainability."

I agree with Stopka. I’d rather see the sustainability needle move a little bit with the massive middle of the population. I’m all for moonshots — we desperately need people looking for them too — but I don’t expect a whole lot of Walmart’s, Paul Polman’s and Interfaces.

As Stopka says, "A little movement with 70 percent of the population is a big swing."

A big sustainability swing means a new outlook for sustainability professionals. It means bunts and singles are more than OK. Concentrating on culture and the "who" of sustainable change, not just the "what," should be a bigger part of your portfolio. Compromising in order to create a positive slippery slope of progress should be practiced more, too.

Stopka admits to such compromise. He says, "I have to make some concessions in what I believe is needed. Yes, I want everyone to go deep and far, but I can’t expect them to because everyone has their own motivation. I need to really understand what makes that 70 percent tick and work hard to frame sustainability solutions as an answer to their pain points or things that they’re passionate about. When we frame ideas in the language of those we seek to convince, they will begin to walk the path on their own and seek deeper change without us pushing them along. That is the real win."

This takes time, I know. I wish governments and policy makers could create solutions, the sooner the better.

Instead, the weight is upon corporations, cities, educational institutions and nonprofits that are made up of people such as the head of transportation Stopka was dealing with. Can you imagine the sustainable progress we could achieve in the next decade if we could have thousands of such self-motivated conversions?

To me, this should be the measure of the great corporate sustainability leader. How many department heads have seen the value of sustainability because you as the leader have had the empathy, outreach and ability to ask the right questions to unleash all these latent difference-makers?

Labels: Disdain them — except one

Heeding the lessons of 'sustainability vets'

An ode to the sustainability profession

See all by Bob Langert