Coral reefs are home to so many species that they often are called "the rainforests of the seas." Today they face a daunting range of threats, including ocean warming and acidification, overfishing and pollution. Worldwide, more than one-third of all coral species are at risk of extinction.

I am one of many scientists studying corals to find ways of helping them survive and recover. As a recent report from the National Academies of Science, Engineering and Medicine shows, researchers are exploring many strategies. Some, such as managed breeding to make corals more tolerant of stresses, are already being developed at small scales. Others, such as moving corals to colonize new areas, have not been tested yet.

My own work examines whether greater diversity of coral species on reefs can help corals survive and thrive. In a study published earlier this year, my colleague Mark Hay and I found evidence that the answer is yes. This finding could help to inform broader strategies for making coral reefs more resilient in altered oceans.

In nature, more is better

Are ecosystems healthier if they contain many species than if they harbor only a few? This is a central question in ecology. Generally, scientists have found that ecosystems with more diverse foundation species — those that define a system and are inseparable from it, such as trees in a forest — tend to be healthier and function better.

Until recently, no one had applied this test to coral reefs. But we do know that healthy coral reefs are diverse, structurally complex ecosystems dominated by corals. In contrast, reefs that have been damaged by stresses such as coral bleaching events tend to become simplified, less diverse landscapes, often dominated by seaweeds.

For our study we chose a reef area on the southwestern coast of Fiji’s main island, Viti Levu, in the South Pacific. Many reefs along this coast have been heavily degraded by overfishing and other human-related activities, reducing coral cover and allowing seaweeds to dominate.

There are hundreds of coral species across the Pacific, but at smaller scales, we found just five species or fewer during preliminary surveys conducted on the degraded reef at our site. As these conditions mirror what is happening to many reefs worldwide, we saw it as an ideal place to test whether coral diversity matters for the "new normal" that we expect to see on reefs of the future.

Coral reefs stressed by overfishing rapidly can become dominated by seaweeds. Some types of seaweed produce chemicals that repel coral and fish larvae, which may prevent degraded reefs from recovering. 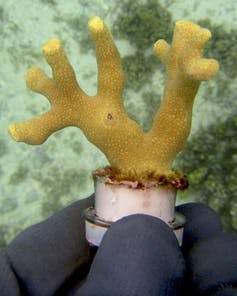 Cody Clements
A Porites cylindrica coral planted in our experimental gardens. Each coral was embedded within an upside-down soda bottle neck using epoxy, which allowed us to easily attach or remove them from the garden plots.

Our team created 48 concrete plots on the seafloor of the degraded reef, which served as the bases for experimental coral gardens. We created single-species gardens that each contained one of three coral species — Pocillopora damicornis, commonly known as cauliflower coral; Porites cylindrica, also known as yellow finger coral; and Acropora millepora, one of a number species known as staghorn corals. We also planted mixed gardens containing all three species.

We chose these corals because they are common to reefs across the Pacific and are representative of different coral families that have shown varying responses to a variety of harmful disturbances. In all, each garden contained 18 coral individuals, for a total of 864 corals.

To assess each coral’s performance as it grew, we needed to remove them from their plots periodically. So we cut off the tops of hundreds of soda bottles and planted an individual coral in the upside-down neck of each bottle with epoxy putty.

We embedded the bottle caps into our concrete slabs so that we easily could unscrew each bottle neck to examine the coral it held, then screw it back into its base.

Over 16 months we weighed the corals and tracked other measures of their well-being, including tissue death and colonization of each garden by harmful seaweeds. 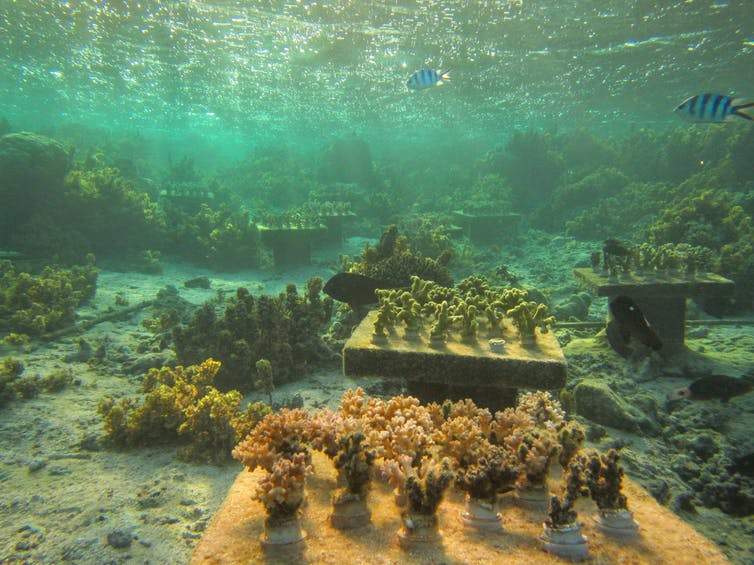 Cody Clements
Experimental coral gardens on a degraded reef in Fiji. Gardens with a mix of coral species performed better than gardens containing only one species. 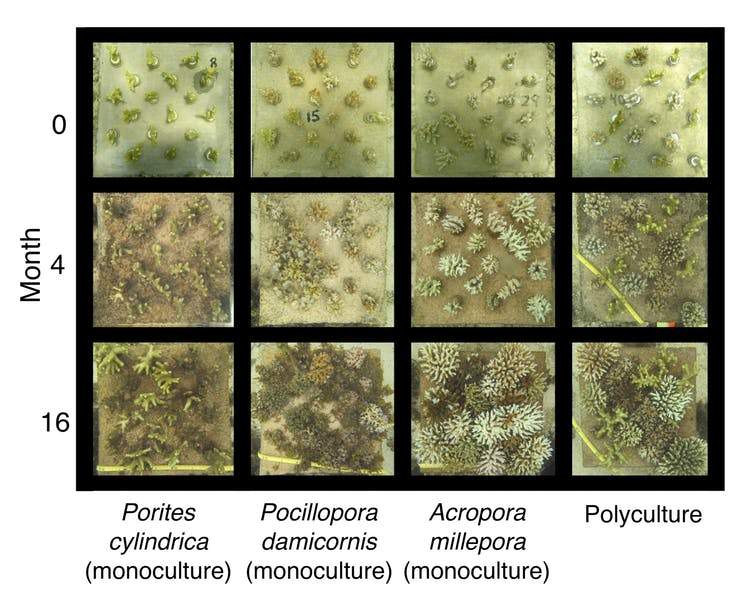 Why is more better?

The next question is what drove the effects that we observed. We hope to investigate a number of leads in future experiments. For example, farmers commonly observe that planting a diverse mix of crops helps to reduce the spread of infectious diseases among individuals. Could the same be true for coral reefs?

Our initial findings offer both concern and hope for the future of coral reefs. If diversity is integral to coral well-being, then continued species loss dramatically could alter these ecosystems in ways that lead to further reef decline. How many parts can be removed from the "ecosystem engine" before it breaks down?

That said, many strategies in the National Academies report involve using biodiversity — both at the genetic and species level — to enhance coral reef resilience. Examples include cross-breeding corals between populations; altering coral genes to give them new functions, such as higher heat tolerance; and moving stress-tolerant corals or coral genes to new locations.

Promising advances in technology, such as mapping coral reefs from the air, also may help researchers assess coral health and determine which species they contain. This baseline information may help better inform management and restoration efforts.

Corals are in trouble, but they aren’t down for the count yet. Perhaps harnessing the power of their remaining biodiversity can help give them a fighting chance.