There are many new names near the top of Newsweek’s latest rankings of green leaders among publicly traded U.S. companies, and it isn’t because the methodology is dramatically different, as was the case last year.

If the ones at the very top sound familiar, it’s because they did well on the 2014 list. Healthcare upstart Biogen (which was No. 7 last year) leapfrogged Botox maker Allergan and software maker Adobe Systems to claim the top spot among U.S. companies, pushing the other two down to No. 2 and No. 3, respectively. 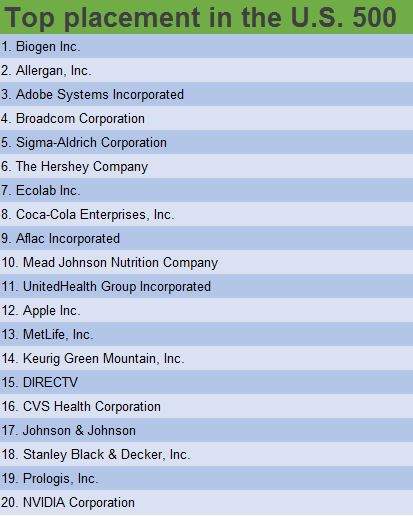 There are eight weighted indicators used to create the overall scores: productivity metrics related to energy productivity, greenhouse gases, water and waste; how closely executive compensation is linked to environmental performance; and whether or not the company’s board is mandated to act on issues related to social responsibility or sustainability. 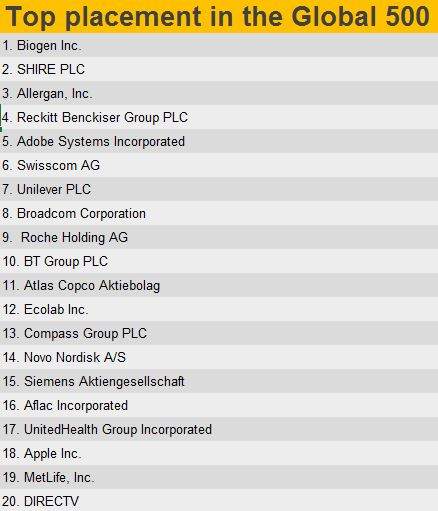 The most heavily weighted criteria is a “green revenue” score derived from products and services that “contribute positively” to society or sustainable resource management. This metric was particularly beneficial to many of the software and information technology companies on the list, including Adobe, Autodesk, CA, Salesforce and Workday.

The percentage of ranked companies using green compensation incentives rose dramatically between last year and this year: 53 percent of the U.S. organizations now use this as a component of salaries, compared with 29 percent in 2014.

In the FAQ section explaining the methodology, Newsweek identifies several factors that make its list “imperfect” including an ongoing lack of transparency at some companies reluctant to discuss environmental performance. It notes:

“Because companies, for the most part, do not report their impacts on biodiversity or the impact of their suppliers, it is possible for a company to outsource or push these environmental impacts ‘off the balance sheet.’ In addition, due to a lack of data, there is an inherent lack of context as to the use of certain environmental resources. For instance, it matters a lot more if you are using water in drought-stricken California than beside a Great Lake. And what is a sustainable level of greenhouse gas pollution?”