Days before the February 2011 Utah State University student referendum, the "green police" were out in force issuing "citations" to students who drove to school or placed recyclable items in the trash.

The citations actually were political leaflets from representatives of the USU College Republicans dressed in satirical law enforcement garb, protesting the “Blue Goes Green” ballot measure that would impose a 25 cent-per-credit-hour fee (averaging about $3 per student per semester) to fund a proposed Student Sustainability Office and administer a grant program for student initiatives to conserve resources on campus. Although the fee was placed on the ballot by a student grassroots movement, the USU College Republicans viewed it as a “socialistic” tax.

“It’s taking my ability to choose away,” Mikey Rodgerson, the group’s president, told the campus newspaper. “We live in a bad economy … and the school has the audacity to propose an AstroTurf fee.”

Opposition to Blue Goes Green was not unexpected. Utah State, with an on-campus population of about 15,000 students, is nestled in the politically conservative Cache Valley in northern Utah where many students, faculty and citizens often view environmental issues with skepticism. Although Cache Valley suffers from numerous unhealthy “red-air" days due to winter inversions that trap local vehicular, fireplace and agricultural pollutants, opposition to solving environmental problems could come from perceptions that it may result in bigger government and unnecessary taxes that threaten personal freedom and economic prosperity.

USU President Stan Albrecht, nonetheless, signed onto the American College and University Presidents’ Climate Commitment (ACUPCC) in 2007, requiring USU to achieve “carbon neutrality” by 2050. The university established a Sustainability Council, involving faculty and staff to initiate and monitor energy conservation and carbon emissions across campus to comply with ACUPCC. The student-proposed Blue Goes Green grant initiative, modeled after other universities’ sustainability programs, was an outgrowth of that commitment.

USU students narrowly approved the controversial Blue Goes Green fee, 2,305-1,952. That fall, the first Blue Goes Green-funded projects were unveiled on campus, the most visible including some new bicycle maintenance stations and bike racks to promote cycling to school and new water bottle filling stations to encourage students to adopt reusable bottles rather than purchase bottled water. With each refill, the new fountains display digital read-outs of the number of plastic bottles that have been averted from the waste stream. A small greenhouse demonstration project and a graduate student’s biofuels project also were funded.

A campus-wide online survey was conducted shortly after these initial projects were installed to assess student attitudes about the Blue Goes Green fee. The survey generated over 400 individual student comments. Although most comments were supportive, many were dismissive of green issues and outright hostile. Opponents disapproved of students having to pay for a “liberal” program on campus, especially in the face of budget cuts and escalating tuitions.

“Fees are killing me,” wrote one student. Another added, “Recycling should save students money … you guys found a way to make it cost.” One demanded, “I want to be reassured that the green fee is actually doing something and making a difference.” Another student issued a challenge: “Please do something with it that I will actually benefit from!!!” 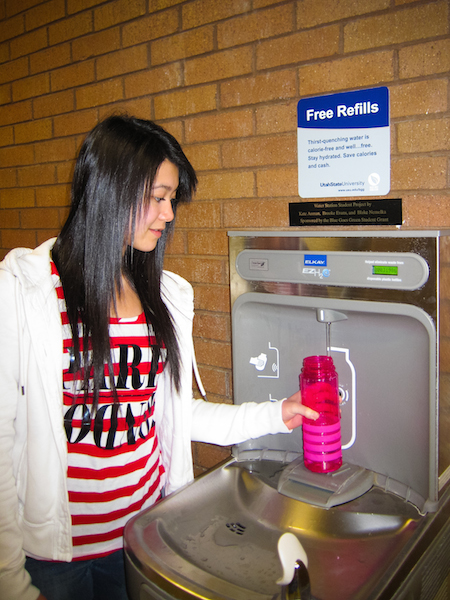 The feedback indicated that the Blue Goes Green initiative had a twofold public relations problem: (1) objections about its need and potential efficacy were still festering; and (2) many students had only a modest understanding of sustainability, its importance and what it would take for the campus to conserve resources and reduce its carbon footprint.

A student intern proposed that part of the outreach effort to address these issues should include permanent signage identifying the most visible Blue Goes Green projects on campus to inform students about how the projects fostered sustainability. The question was, what messages would counter critics’ objections and engage and win over busy, hostile and potentially apathetic students about sustainability and its benefits.

As members of the Sustainability Council’s Marketing Work Group (consisting of staff, student interns and faculty), our task was to develop those messages. In addition to addressing student objections, we wanted to create potentially provocative and amusing messages that would sidestep the typically fatiguing doom-and-gloom or preachy messages commonly associated with going green, which we perceived would be a turn-off. Heeding past green-marketing research and best practices, we sought to focus on sustainability’s positive and personally relevant benefits that would resonate with students’ values, needs and aspirations.

Looking at our college audience (and USU students in particular), we charted what values and issues truly mattered to them — grades, balancing school and work, socializing, self-discovery. With about 85 percent of the USU student body being members of Mormon faith, USU students held their religious heritage and beliefs in high regard, valuing self-reliance, independence, freedom, hard work, health and fitness, and marriage and strong families.

We sought to create messages that would activate and resonate with some of those convictions, demonstrating how sustainability could support them. We brainstormed messages, drawing on facts and pop culture references that could pique student interest. We vetted our ideas among USU students in two marketing classes and the Sustainability Council, and those chosen were posted on signs near 12 Blue Goes Green projects across campus during the fall of 2013. To draw attention to them, a photo scavenger hunt contest was launched over the university’s social media where the first lucky student submitting “selfie” pictures with each sign won a free dinner for six at a local popular restaurant. Here are some selected messages and themes that connect the sustainability projects with USU student sensibilities.

To address protests that the Blue Goes Green fee took away students’ “free will,” we illustrated how Blue Goes Green’s encouragement of cycling to school over driving a car actually enhances some freedoms and conveniences that students may not have considered. Signs posted next to two new bike racks read:

“Carbon Free VIP — Cycling is always carbon-free, and the best parking is right next to the building.”

Both messages illuminate cycling’s environmental and pragmatic benefits over relying on a car for campus transportation.

Saving another kind of green

The most common objection over the Blue Goes Green fee was that it was a financial burden. One of the Sustainability Council leaders pointed out, however, that the average student’s $3 per-semester fee is equivalent to the purchase of two bottled drinks from the university’s vending machines; using the water bottle refilling stations would save students money almost immediately. Highlighting economics, two of our messages over the new water fountains read:

“Saving you Green with Every Refill — Convenient water bottle-filling stations keep plastic bottles out of the landfill and save the average consumer hundreds of dollars a year.”

“Fill 'er up — One gallon of bottled water can cost more than twice as much as a gallon of gas. Why pay for water when you can fill-up for free?” 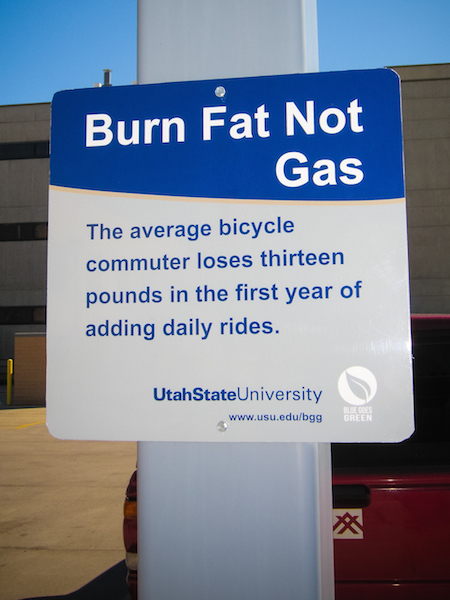 USU attracts many students because of its close proximity to outdoor recreation, such as hiking, rock climbing and skiing. Health, fitness and the university’s “Go Big Blue” athletics are deeply rooted facets of campus life. Cycling to school and encouraging the consumption of water leverage those important values. Fitness-oriented messages positioned near the new bicycle facilities include:

“Work-it-out — Cycling burns calories while working the glutes, thighs and calves. Regular cyclists can enjoy the fitness of a person years younger.”

Health-oriented messages used next to water bottle-refilling stations include:

Another of our water bottle-refilling station signs combines health with money savings:

A common misperception about bottled water is that it is perceived to be better or safer than tap water, although government regulations ensure that both types of water are generally comparable. USU’s water supply comes from municipal supplies charged by nearby mountain snowmelt and springs, which are tested regularly to comply with federal and state standards (PDF). We played up this fact in three signs to assure students of the university’s tap water quality, tying in some pop culture references.

“Smarter than Smartwater — Almost half of the water in bottles is the same as what comes from your faucet. Why pay a premium for what’s already on tap?”

“Go with the Flow — Eight glasses of quality-tested water from the tap could cost less than a quarter per year, or you could pay 8,000 times more for water in a bottle.”

A common aspiration for college students, especially in Utah among the Mormon faithful, is attracting a mate for marriage. In jest, we allude to this desire for love in a sign near a bike rack:

Establishing sustainability as a campus value

So far, our signs displayed on the Student Sustainability Office’s Facebook page are getting “likes,” and we plan to create more signs with similar messaging to accompany future Blue Goes Green projects across campus. We want students to seek the signs, get a chuckle, reflect on their messages and muse over how sustainability benefits them personally and aligns with their values and aspirations.

Blue Goes Green intends to become more pervasive across campus by adding a diverse array of high profile, student-proposed projects to encourage more creative and provocative ideas for education, resource conservation and the reduction of the university’s carbon footprint. New student proposals include an array of solar panels on the new business building, solar-powered recharging stations for cell phones and up-close, hands-on demonstration projects for students to interact with solar technology. Blue Goes Green strives to establish sustainability as a student-driven way of life on campus.

While the initial "green police" protests over the Blue Goes Green referendum are destined to become a distant memory as new students come to USU, the litmus test for Blue Goes Green comes in 2016 when the USU Student Fee Board reviews the fee and its outcomes to decide on its future. To date, over 670 universities have signed onto the American College & University Presidents’ Climate Commitment. As universities increasingly take a leadership role in society for climate action, administrators need to be cognizant about how sustainability and carbon neutrality initiatives — funded by student fees or tuition — may be perceived by students and other constituents (faculty, state legislatures, donors, alumni) in the face of dwindling state funding, rising tuitions, growing student debt, increasing cynicism over the value of “liberal” college programs and other pressures facing higher education today.

We share our experimentation with message framing that aligns sustainability initiatives with student values and pop culture to encourage a broader dialogue on how sustainability advocates may engage diverse audiences to move institutions and guide the next generation of society’s leaders onto a more sustainable path.

This story first appeared at Solutions. The authors thank Jordy Guth, Cathy Hartman, Kristin Ladd, and Isela Phelps for their comments on an earlier draft. 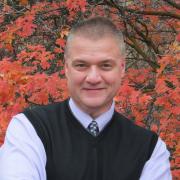 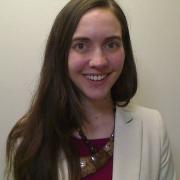