Ask a city official or administrator to name one of the most promising smart city applications, and invariably they will point to intelligent parking services that help reduce traffic while creating new revenue streams for the municipality.

The green benefits of smarter driving may be more difficult to quantify precisely, but they could be just as compelling.

By adding advanced wireless capabilities, location services and the power of cloud-delivered Big Data applications to its vehicles, for example, Ford is driving cost-effective first responder and telemedicine solutions into underserved communities. What's more, these connected car technologies will be critical for encouraging more widespread adoption of electric vehicles, as well as for enabling semi-autonomous vehicles that boost fuel-efficiency services without requiring driver intervention.

By 2015, nearly 20 percent of all the vehicles sold worldwide will include embedded connectivity features, according to research (PDF) by London-based trade association GSMA and research firm SBD. A much higher percentage — close to half — will be connected via either in-board systems or smartphones, the firm noted. The revenue from in-vehicle services such as traffic information, call center support or entertainment could reach $33.6 billion by that timeframe.

Every notable automaker from Audi to General Motors to Tesla aspires for a piece of those sales, and navigation service providers including OnStar are evolving their strategies accordingly. Luxury car company BMW has been particularly aggressive with its ConnectedDrive services portfolio, a series of entertainment, maintenance, navigation, safety and security applications that it is using to differentiate the value of its vehicles. 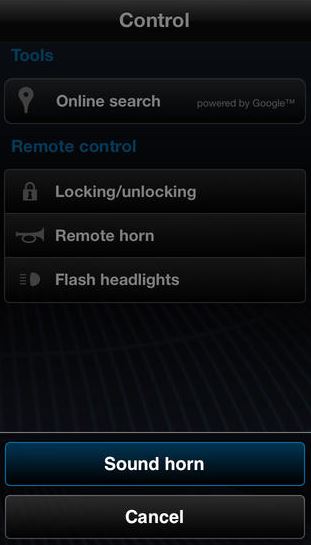 "The objective is to have around 5 million BMW cars linked up worldwide via ConnectedDrive with the help of the built-in SIM card by the year 2017," notes BMW in its background information about the service. "This shift in strategy makes BMW the first carmaker to firmly commit itself to the goal of achieving blanket connectivity."

One of BMW's latest partners in this strategy is SAP, which revealed in late February that it has helped BMW develop prototypes for two services: one that can help drivers navigate vehicles to available parking spaces more efficiently, and another that can be used to personalize and deliver promotional offers for things such as fuel or food to drivers based on their actual driving route.

What SAP provides is the cloud-based platform that hosts and delivers such services to vehicles, said Gil Perez, senior vice president of sustainable industries and general manager of connected vehicles at SAP. "The car manufacturer can access this catalog of services to offer via their cars, as part of an in-car dashboard or smartphone," he said.

For example, parking garages or municipal authorities in certain regions would be able to offer availability information. Or a gas station along the driver's route might be able to offer a special fueling option or even a break on per-gallon pricing. In both cases, drivers would be able to opt in to these services. "We take care of the service providers and the job of helping list their information in the marketplace," Perez said. "We take care of the technical integration."

The future of connected driving

When will next-generation connected cars become reality rather than prototype? What will wind up being the so-called killer app?

Right now, this particular project is characterized as a research initiative and who knows when, or if, these particular applications will see the light of day commercially. But the pilot points to a future in which connected driving isn't just about better music to cruise by, but about smart technologies that address urban traffic congestion, improve fuel consumption and address other behaviors that could make everyday vehicles far more efficient.

The video below depicts some hypothetical usage scenarios: