It's official. The BMW Group has debuted its first car to be designed and built from the ground up as an all-electric vehicle.

The BMW i3 is an ultra-lightweight hatchback car -- the first mass-produced vehicle made out of carbon fiber reinforced plastic. Weighing about 2,700 pounds, it is intended for urban driving and is scheduled to reach the US market in spring 2014.

With an expected range of 80 to 100 miles per charge on its lithium-ion battery, the BMW i3 won't break any records for EV range.

But if you're really worried about that, you can use the car's gasoline-powered range extender.

The 34-horsepower, 650cc engine starts when the battery depletes to a certain level, maintaining the charge and roughly doubling the range if necessary. Technically, though, it never directly drives the car's wheels, which distinguished it from hybrids. If that's still not enough, BMW i3 owners will be able to get a conventional vehicle for trips of more than 100 miles through a special loaner program.

The car is designed to go from zero to 60 miles per hour (mph) in 7 seconds, up to top speeds of 93 mph. It can be replenished in about a half-hour with a faster charger; the 220-volt charger will take about three hours.

The BMW i3 is full of technologies and design features that aren't found in the carmaker's gas-powered luxury vehicles.

“Quite often in a post-apocalyptic world all the vehicles end up looking like military vehicles, and that’s not the kind of science fiction that I wanted our designers to design,” BMWi design head Adrian Van Hooydonk told Forbes. “I wanted something that offered a positive view of the future, a future that works very well. That’s the briefing I gave them.”

One big breakthroughs centers on the passenger cabin, the so-called Life Module. The carbon fiber material used to construct it is as strong as steel, but is 50 percent lighter; it is also 30 percent lighter than aluminum. 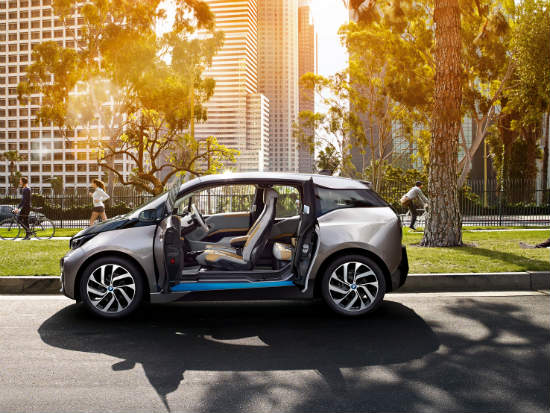 With its focus on urban markets, still an early concept in the US market, it's hard to imagine the BMW i3 will really shake up the mainstream EV market. But it comes at a great time. Last year, plug-in and electric cars were the fastest growing segment of the US automotive industry, with close to 440,000 sold, according to data from research firm Mintel.

What's more, BWM's entry is a great positive development for the EV industry, which saw the demise of two pioneers this spring: Fisker Automotive and Coda Holdings. Along with activity behind the electric Honda Fit, it's a sign that the major automakers remain committed to this form of low-carbon transportation.