Bank of America Corporation, the largest bank in the U.S., issues its first CSR report today providing a comprehensive, deeply detailed view of billions of dollars in environmental business initiatives, hundreds of billions for community development, and hundreds of millions in philanthropy.

"As you read this report, you will find ample evidence of our progress and the advantages of being big," said Anne M. Finucane, global strategy and marketing officer, in the report. "Our size, scope, capabilities and commitment can be a powerful source for doing good."

GreenBiz.com reported on BofA's latest figures and goals for environmental performance in May. Yet, while the statistics released by BofA in the spring are more recent, the inaugural CSR report provides an unprecedented look at the bank's broader business sustainability initiatives, their goals and targets, and progress toward them.

Here is a chart summarizing BofA's nearly $12 billion of spending and commitments for environmental business initiatives. The bank has planned to deliver $20 billion toward the initiatives by 2017. 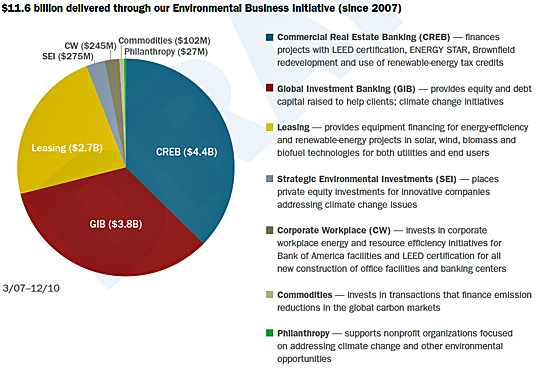 Here's a list highlighting the bank's CSR goals and achievements in 2010:

• Environmental Business Initiatives
Goal: Invest $20 billion by 2017.
Achievement: The bank's investments, lending and spending in this area amounted to almost $4 billion in 2010. Overall, $11.6 billion had been delivered toward the $20 billion goal since 2007.

• Greenhouse Gas Emissions
Goal: Pare them by 9 percent between 2004 and 2009.
Achievement: Exceeded expectations by achieving a 18 percent reduction by the end of 2010 within BofA's legacy portfolio.

Photo and chart from the Bank of America 2010 CSR Report.