Brace yourself: Hope is taking the upper hand

I’d always had this idea that sometime in the future the damage to our planet would be so catastrophic it would trigger decisive action, the way World War II did. Everything from the food on our plates to geopolitics would need to change. Things would “come to a head,” the “time would come.” But that, in my mind, was “later.”

That time has come. Because of climate change and mass extinction the scientific consensus is that life as we know it is gravely threatened — our safety from extreme weather, our food, our water, and the air we breathe. The chorus of voices is growing rapidly.

It’s not just Pope Francis or Bill McKibben or Desmond Tutu; it’s folks like Paul Polman, the CEO of Unilever, and General Charles Jacoby, retired Commander of the U.S. North Command. It’s not just the vastly influential and famous, it’s all of us who are afraid of what the future holds.

But something else is changing: Hope is taking the upper hand. And it’s very busy.

For decades the dialogue on the state of our planet has been riddled with mind-numbing “catastrophe speak.” Nuclear winter. Population bombs. Killing the earth. It’s been a cultural seesaw between hope and despair, one that has driven many a good person to insulate themselves from the facts, because they “just can’t stand thinking about it.”

The seesaw has taken a decisive swing in the hope direction. More and more people “just can’t stand” sitting back and doing nothing about it. They’re not calculating the odds of success; they’re rolling up their sleeves.

The planet of consumers is assembling a new shopping list. We’re shopping for a livable future.

The catastrophe speak is heeding different dialogues, different behaviors. More and more it’s about “capacity speak,” about building capacity. What kind of energy generation systems will support a livable future for our children and grandchildren? Agricultural systems? Water-management systems?

In September two documentaries, “This Changes Everything” and “Racing Extinction” passed on paralyzing rhetoric and showed the path forward — profiles of people saving people, saving creatures, saving habitats. In an editorial Rebecca Solnit wrote for the Guardian, “Spare us the bitterness and negativity; we need hope and incremental victories.”

The planet of consumers is assembling a new shopping list. We’re shopping for a livable future. Some of the smartest, bravest, and most innovative people are making those lists. The list is long. Even a slice of it boasts an array of economically viable options ready to be scaled up: solar energy, sustainable agriculture, rotational grazing, LED lighting, smart glass, infrastructure upgrades.

The number of people around the world working on solutions is growing exponentially, gathering newcomers like magnetic filings. Every time someone brings up climate change at the kitchen table or marches out into the streets to demand the end of our fossil-fuel driven economy or reuses a plastic container rather than throwing it out, hope grows.

But real hope? Imagine a burning building and a bucket chain forming. Ask one of the people in that bucket chain, “Is there hope?”

Why? Because the passion for rescue doesn’t calculate odds. It is a lived, breathing hope.  With each action — large, small, minute, massive — hope for our future grows stronger, hope takes the upper hand. 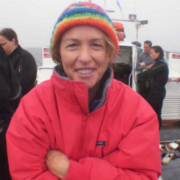 See all by Liz Cunningham