Bread, wine, chocolate: The slow loss of foods we love

Bread, wine, chocolate: The slow loss of foods we love

This is an edited excerpt from Bread, Wine, Chocolate: The Slow Loss of Foods We Love. Reprinted with permission by HarperOne, a division of HarperCollinsPublishers.

The standard American diet is, with a few notable exceptions, a supersized version of what we ate 40-odd years ago, made up of mostly grains, fats, oils and animal-based proteins.

We eat about the same amount of fruit today that we did in the 1970s (60 pounds a year) and the same amount of vegetables we ate in the 1990s (110 pounds). In the last 45 years, our milk consumption has dropped from 21 gallons to 13 gallons, but we moved the fat we used to get from whole milk over to cheese, which is why our dairy consumption has nearly tripled — from 8 pounds to 23 pounds per person. Our love of cheese has contributed to a whopping 20 additional pounds in total fat we eat each year.

We find what we love and stick with it — but that doesn’t necessarily mean it’s good for us. In its best manifestation, food is love — one of the most intimate connections that exists between people.

But love is hard, and improving our relationships is work. It requires not only a commitment to ourselves and the objects of our care but a willingness to see and do things differently. In order to transform our love lives, change our diets or increase biodiversity, we first have to understand the connections and factors that inform those choices.

Agricultural biodiversity — also called "agrobiodiversity"— is the foundation of agriculture and food. It’s what emerges out of the connection between

1. The microorganisms, plants and animals we eat and drink;

2. The inputs that support their creation and development, including bees and other pollinators, as well as the quality of nutrients in the soil;

3. Nonliving (or abiotic) influences on our ability to grow and gather food, such as temperature and the structures of farms; and

4. A range of socioeconomic and cultural issues that inform what and how we eat. Broadly speaking, biodiversity is the variety of life on Earth. 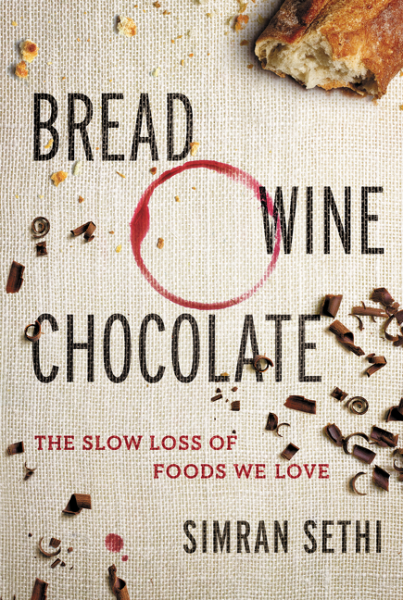 The first time I met Luigi, I was researching the loss of diversity in seeds. He was smart, funny and tough, reminding me, as he picked his teeth with my business card, that seeds are essential. "Seeds," he said almost dismissively, "are sex." Indeed. I blushed, not because it was salacious but because it was obvious. Luigi has dedicated his professional life to biodiversity and has, over the last few years, helped me understand (with a healthy dose of tough love) the stories of seeds and the intricacies of conservation.

The broadest level of biodiversity is that of ecosystems: the communities of plants, animals and all living creatures that interact with one another and their physical environment, such as a desert or a rainforest. The second level is species, defined as the largest group of individual organisms that can have sex and produce fertile offspring. Species exist within these ecosystems. The third level, genetic diversity, is measured in multiple ways and is tougher to discern. Genes are part of DNA (deoxyribonucleic acid) — the chains of molecules that are the instruction manuals for every cell in our body.

"Counting differences in the sequences of our DNA is the best way to identify genetic diversity," Luigi explains. "But you can also count varieties, or measure variations in size, shape and structure ... what are known as morphological differences."

I was still unclear, so he elaborated: "It’s not a great comparison, and probably politically incorrect, but think of how you would measure genetic diversity in 100 humans you picked off the street. DNA fingerprints, sure. But also, how many races and ethnicities are represented in the sample? That would be the very rough equivalent of varietal diversity. Finally, how many eye colors are there? And what is the range of heights? That’s morphological diversity."

It feels counterintuitive to contemplate loss, particularly against the backdrop of floor-to-ceiling aisles in supersized supermarkets.

These influences are dynamic; they operate in response to one another and are constantly evolving. Agrobiodiversity shapes — and is shaped by — every meal we eat. And when I say "we," I mean "we" in the global sense, for all of us. We’re all in this together: No country is self-sustaining when it comes to the range of diversity needed to develop improved varieties of crops. We feed each other.

The loss of agrobiodiversity — the reduction of the diversity that’s woven into every single strand of the complex web that makes food and agriculture possible — has resulted in a food pyramid with a point as fine as Seattle’s Space Needle, making it harder, and less pleasurable, for us to feed ourselves.

I know it feels counterintuitive to contemplate loss, particularly against the backdrop of floor-to-ceiling aisles in supersized supermarkets. In a Walmart (the No. 1 grocery chain in America) in Winston-Salem, North Carolina, I counted 153 flavors of ice cream and eight brands of yogurt.

But then I looked further. The choices are superficial — primarily in flavor and secondarily in brand, most of which are owned by the same company. In addition, more than 90 percent of every container of yogurt, milk and ice cream is made with milk from one breed of cow, the Holstein-Friesian, known as the highest-producing dairy animal in the world.

I counted 21 kinds of potato chips, but in the produce aisle, I found only five types of potatoes. Most of the bagged potatoes didn’t include names, only colors — red, white, yellow — plus "Idaho." The orange sweet potatoes were loose and stacked high. Now I understand why most of those chips I saw just listed "potatoes" as their primary ingredient. Despite being the top vegetable consumed in America, potatoes have been relegated to the background, the carrier for vinegar and salt, sour cream and chives.

Bananas — America’s most popular fruit — also carried only a single descriptor: "banana." Although no variety was listed, I know it was the threatened Cavendish. There are over 1,000 varieties of bananas grown in the world; however, the one that ends up on supermarket shelves isn’t the one that has the best texture or taste but one that transports easily and has, so far, managed to beat back disease.

I saw six kinds of apples, including Granny Smith, Gala, Fuji and the mealiest, most inappropriately named apple: Red Delicious, one bred for beauty, not taste. Apples were among the first fruits to be cultivated. The original was likely small and tart, closer to what we think of as a crab apple. But, through breeding, we slowly transformed its texture, taste, color, size and level of sweetness. There are now 7,500 varieties of apples grown all over the world, less than 100 of which are grown commercially in the United States. In fact, nearly every historic fruit and vegetable variety once found in the United States has disappeared.

Despite being the top vegetable consumed in America, potatoes have been relegated to the background, the carrier for vinegar and salt, sour cream and chives.

For millennia, we’ve made decisions about what to grow or not grow — and what to eat or not eat. That’s what agriculture is: a series of decisions we, and our ancestors, have made about what we want our food and food system to look and taste like. But our ability to make these decisions — and indulge in our pleasures — is being compromised in ways that are unprecedented.

While some places in the world are experiencing an increase of diversity in certain parts of their diet, the general trend is the same one we see in phones and fashion: standardization. Every place looks and tastes more similar — and the country that sets this trend is America. The refined carbohydrates, animal proteins and added fats and sugars that make up the majority of our diets have also become the template diet for the world.

This increase in sameness is what conservationist Colin Khoury and co-authors of the most comprehensive study to date on the diversity (and lack thereof) of our food supply call our "global standard diet." The researchers analyzed 50 years of data on major crops eaten by 98 percent of the population. They found diets around the world have expanded in terms of amount, calories, fat and protein, and that a greater number of our calories now come from energy-dense foods, such as wheat and potatoes. In areas facing food insecurity, this is a very good thing.

The researchers also learned that agrobiodiversity within our dietary staples has increased. Another good thing. And it makes sense. With globalization, foods zoom all over the world, which explains the popularity of mangoes and the random appearance of lychees in, say, Lawrence, Kansas. In Vietnam, 80 percent of calories from plants used to come from rice; now corn, sugar and wheat have risen in importance, and calories from rice have dropped to 65 percent. In Colombia, palm oil used to be nonexistent. Now nearly half of Colombians’ plant-based fat comes from palm, and the country is the third largest producer of palm oil in the world.

But this availability obscures the more challenging truth that Colin and his colleagues discovered: Globally, foods have become more alike and less diverse. As the amount of food around the world has shrunk to just a handful of crops, regional and local crops have become scarce or disappeared altogether. Wheat, rice and corn, plus palm oil and soybeans, are what we all eat now — the same type and the same amount.

We are now facing one of the most radical shifts we have ever seen in what and how we eat — and in what we’ll have the ability to eat in the future.

Yes, this increase in carbs, fats and proteins has helped feed hungry people, but on a global scale it’s also increased our chances of becoming what author Raj Patel calls "stuffed and starved." The world overconsumes energy-dense foods but eats fewer foods rich in micronutrients (the small but essential amounts of vitamins and minerals we need for healthy metabolism, growth and physical development). While 795 million people go hungry, over 2 billion people are overweight or obese. Both groups suffer from micronutrient malnutrition.

The global standard diet is changing the biodiversity of nearly every ecosystem, including the 100 trillion bacteria that live in our gut, part of what’s known as our microbiome. The foods and drinks we consume contribute to or, increasingly, detract from the diversity of our intestinal flora and have implications for how healthy or unhealthy we are over the long term.

The factors that contribute to this change are complex and interconnected, but the main reason for this shift is that we’ve replaced the diversity of foods we used to eat with monodiets of megacrops, funneling our resources and energy into the cultivation of megafields of cereals, soy and palm oil.

As farmers from all over the world move toward growing genetically uniform, high-yielding crops, local varieties have dwindled or disappeared altogether. This is why we are now facing one of the most radical shifts we have ever seen in what and how we eat — and in what we’ll have the ability to eat in the future.

Seed preservation is vital for a sustainable food system