From Budweiser to Miller, greening the Big Beer supply chain

For most casual drinkers, beer is beer. It can be hoppy or mild, light or dark, but the finished product often doesn't convey the months of intense agricultural legwork and processing that it takes to get your favorite brews bottle-ready.

As craft brewers continue to gain market share, particularly in urban markets flush with disposable income, the big names in beer are also refining their own production methods to maximize efficiency and address nagging sustainability challenges.

Water use and the process of growing barley are two primary areas of focus for MillerCoors and Anheuser-Busch InBev, particularly as risk factors like water scarcity become more prevalent and new precision agriculture technologies hit the market.

"It really needs to be farmer centric," John Rogers, global director of agricultural development at Anheuser-Busch InBev, told GreenBiz. "We look at economic value creation as well as environmental." 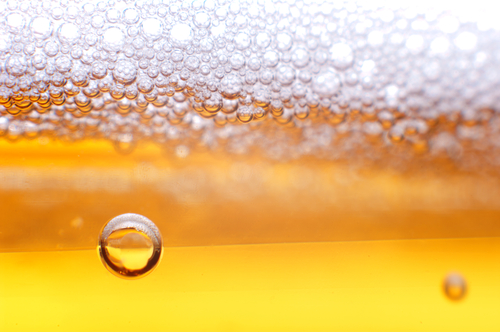 The Sustainability Accounting Standards Board (SASB) this week released new disclosure and accounting guidance for sectors including the alcoholic beverage business. Among the biggest issues facing the beer industry: water and energy usage, agricultural risks, waste generation and local impacts on communities where ingredients are grown.

As the two biggest brewers in the U.S., Anheuser-Busch and MillerCoors have outsized potential to forge models that address these sustainability challenges — and there are high financial stakes for both.

Anheuser-Busch InBev, which has dual headquarters in Brazil and Belgium and a market cap of $197 billion, has cornered about 25 percent of the global beer market with brands like Budweiser, Corona and Stella Artois. The company uses 5 million metric tons of barley annually and works directly with upwards of 20,000 barley growers.

MillerCoors, meanwhile, was born in 2008 with the launch of a joint venture between SABMiller and Molson Coors Brewing Company. The Chicago-based U.S. arm of the companies produces and markets beers including Miller, Coors, Molson and Blue Moon. All told, the company tallied $7.8 billion in sales last year.

To make beer, you need water. By some academic estimates, the liquid resource accounts for 90-95 percent of beer by mass.

In addition to California's ongoing severe drought, many major brewers — along with big, industrial users in many other sectors — rely at least in part on water from other severely depleted sources, like the Colorado River.

"Because alcoholic beverage companies rely heavily on access to a large volume of clean water and water stress
is increasing in different regions globally, companies may be exposed to supply disruptions that could significantly impact operations and add to costs," SASB explains. "Companies operating in water-stressed regions that fail to address local water concerns may face further risk of losing their social license to operate."

Pinpointing exactly what proportion of water comes from locations with high or extremely high baseline water stress (as defined by groups like the World Resources Institute) is a start.

The company started doing detailed local watershed analysis with The Nature Conservancy in Idaho back in 2009 and 2010 “to understand, "What are the long-term risks?" Marotta said. MillerCoors also built a "showcase barley farm" in the state to test out new water efficiency measures, which saved a total of 450 million gallons of water in 4 years.

The company's core metric for water efficiency is ultimately the ratio of beer to water needed in production, which has dropped from 4.1 barrels of water for every one barrel of beer in 2008 to 3.36 barrels of water in 2014. The goal is to reach 3.0 by 2020: 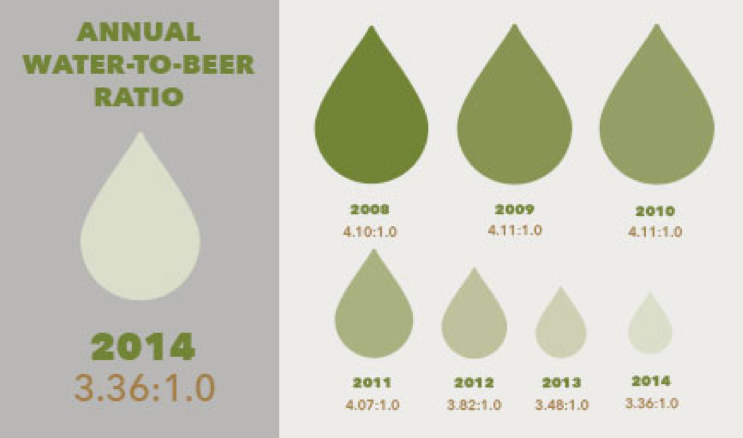 In addition to studying variable irrigation techniques, like how long crops might not need to be watered after it rains, two different MillerCoors barley growers are currently piloting different types of soil moisture probes.

“Water for us really touches every aspect of the supply chain," Rogers said, noting that the company is eying technology to experiment from flood watering systems to center pivot systems that improve on-crop efficiency

Like MillerCoors, Anheuser-Busch is also toying with new ways to capture soil moisture data that can help farmers more effectively schedule irrigation. The AgriMet program is a public-private initiative in the Idaho Valley that also providers weather and water data to other farmers in the region, underscoring the broad challenges inherent in precision agriculture.

“The wider story is that most of the world’s agricultural production is in rain-fed environments," as opposed to irrigated agricultural operations, Rogers said. "What is agriculture’s role in stewardship?"

While water is a universal agricultural concern, the beer industry all deals with a more niche commodity: barley, which is used to manipulate the flavor of beer.

“Malt barley is a really challenging crop to grow," said Rogers of Anheuser-Busch. "There’s a really high standard of quality."

The challenge is magnified with increasing volatility in climate and growing conditions.

"Companies rely on numerous ingredients that are highly susceptible to price volatility, largely due to environmental factors such as shifting weather patterns, droughts and crop disease," SASB explains. "As the impacts of climate change and water scarcity continue to increase in frequency and severity, the price and availability of these key ingredients are likely to become increasingly unstable."

There are also tangential repercussions of the barley supply chain to consider. While MillerCoors grows all of its barley in the U.S., Anheuser-Busch draws from locations including North America, Mexico, Brazil, Uruguay, China and Russia.

In any of those locations, SASB points out that complicating factors can arise.

"The potential for supply shortages or disruptions due to social considerations, including labor violations, child labor, fair wages, and food shortages, present further risk to a company’s long-term ability to source key materials and ingredients," the organization notes in its new beverage industry disclosure standards. 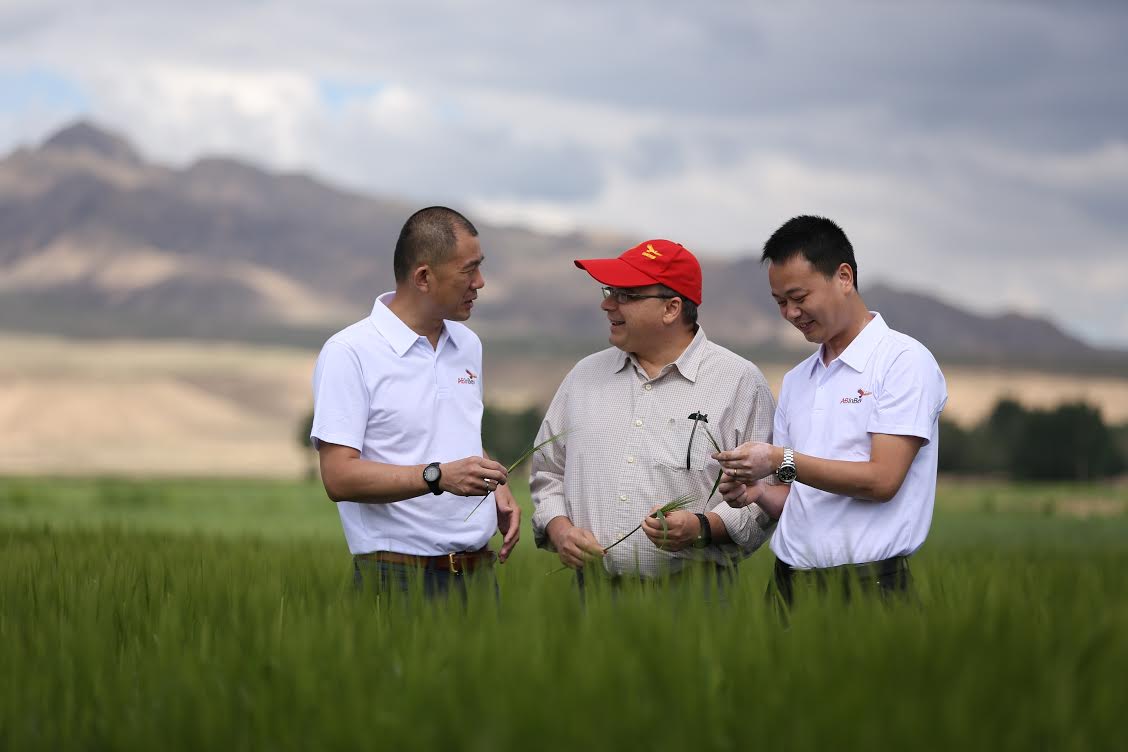 Anheuser-Busch has attempted to curb operational risks and maximize the efficiency of its tens of thousands of barley growers by implementing a SmartBarley program. Initially started in 2013, the benchmarking and agronomy innovation program will soon be used by 2,000 farmers.

"The reason that this program has scaled as quickly as it has is because of our agronomists," Rogers said. "We’re really trying to broaden the projects… to focus on kind of hard core agriculture."

Anheuser-Busch employs 35 agronomists for the SmartBarkey program, who are tasked with meeting farmers face to face and helping them get up and running with the online platform that displays information on everything from nitrogen levels to seed rates and total yields.

Growers also have their own incentive to participate: the company buys malt barley at a premium and feed barley at a discount.

"The benchmarking piece is really the backbone of SmartBarley," Rogers said. “We’re reloading and investing in a lot of advancements in the software system.”

The data is then used in a few ways. A "Bud Lab" at the University of Illinois Urbana-Champaign has been enlisted to help develop statistical models that correlate climate, soil, topography, quality and SmartBarley data, identifying the make better malt barley.

"It’s really looking at it from the long term. The genetic composition of the seed is pure. But once it’s in the ground, anything can happen," Rogers said. "The data piece is going to play an interesting role in that risk mitigation."

Ultimately, he hopes the program will have repercussions beyond the beer industry.

“Hopefully it will be an example for other companies to replicate," Rogers said. "What helps with barley can also help with wheat, can help with potatoes, can help with soy."