California, the sixth largest economy in the world, is positioning itself as a bulwark against the rollback of climate progress at the national level, strutting the state's economic growth as it implemented the toughest environmental policy in the nation.

California traversed the Great Recession while implementing the Global Warming Solutions Act of 2006, which launched its cap and trade system and other programs. The act set a goal of reducing emissions to 1990 levels by 2020 — which the state is on track to meet.

The state emerged from the experience with job growth of 13.18 percent between the depths of its recession in February 2010 and this March, adding 1.8 million jobs, according to the Pew Charitable Trust. The California Air Resources Board calculated that total greenhouse gas emissions dropped 9.4 percent in the decade ending 2014. Emissions per capita fell 18 percent even as the state's GDP grew 28 percent

But back when lawmakers were pushing the Global Warming Solutions Act, its opponents cried it would kill business development. Until businesses claimed the contrary, that is.

So how did environmentalist lawmakers convince business to back regulatory policy for reducing emissions? And what playbook will we borrow from in 2017, when roles are reversed and business is trying to convince the federal government that the Clean Power Plan and the Paris Agreement are sound policies?

"By creating a system to cap emissions, we created a market for innovation," said former California state Sen. Fran Pavley, author of the Global Warming Solutions Act, recalling the successes and trials of forging the law, speaking at the recent Ceres 2017 Conference. Investors foresaw that innovation and backed the legislation. Silicon Valley tech companies followed suit, and so did the Bay Area’s biggest utility, Pacific Gas & Electric. Ten years later, that innovation is attracting $9.8 billion a year of investment in clean tech start-ups in California, according to Next 10.

"Emissions are down, jobs are up, the state economy is strong," Pavley said.

Enticing. In 2017, many businesses and investors are calling for the federal government to stand by the emission reductions policy and climate change mitigation framework set in motion by the Obama administration. Indeed, CEOs of 30 major U.S. corporations and investors representing $20 trillion in assets just called for Trump administration to remain in the Paris Agreement. 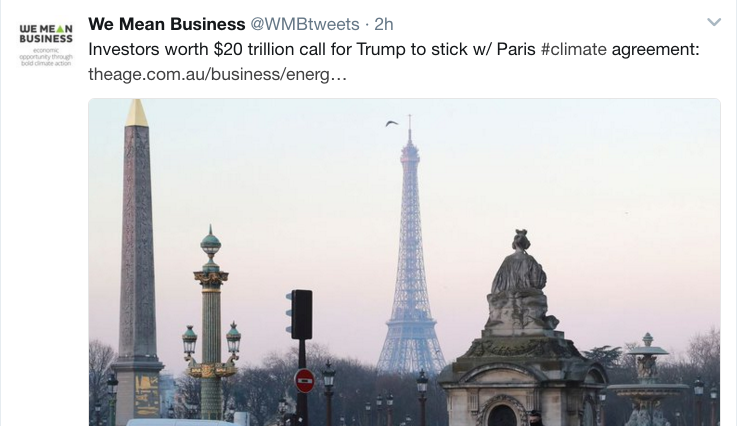 Success now at the national level might come from the same bottom line: Business engagement is essential to make the case for a low carbon economy and emission reduction policies, say those involved in the 2006 California legislative effort.

The major strategy for success in 2006 "was to define the business interest," said Wendy James, CEO of the Better World Group, which spearheaded a lot of the early work AB 32, as well as earlier, less-successful attempts in the state to regulate emissions.

"Instead of it being 'business versus the environment,' we were able, with the help of E2 (Environmental Entrepreneurs), to say we have the support of businesses," James said. Those opposing the bill therefore no longer could use the argument that it was bad for business.

The Silicon Valley Leadership Group, which represents the tech giants and VCs of the valley in state issues, saw the potential of this emerging industry to grow significantly because concern about oil dependence and fossil fuel emissions already was influencing decisions.

"The new markets were a reason we supported sustainability," SLVG Senior Vice President Mike Mielke recalled. "The creation of new types of businesses and new types of jobs is why we jumped on board supporting AB 32." He also spoke on the topic at the Ceres conference.

Autodesk, a pioneer in 3-D printing and biomimicry design and sustainability, became one of the most vocal businesses backing AB 32. Its involvement "was driven by our customers," said Ben Thompson, Autodesk’s senior manager of Sustainable Business.

Autodesk figured out that a low carbon economy was the direction of things "because our customers were using our software to design low energy using buildings and electric cars," he said.

We could see what customers were trying to do and they needed a policy framework, which we realized could create new markets.

At first, it stayed silent. "We want to support our customers, but we felt uncomfortable about sticking our necks out" and potentially alienating other customers, Thompson said. But after a number of years of noticing that customers were designing the future in energy efficient buildings and low carbon vehicles and other innovations, "we realized we needed to be involved," he said. "We could see what customers were trying to do and they needed a policy framework, which we realized could create new markets" and help customers be successful.

It wasn’t only tech companies that backed AB 32. Construction firm KB Homes and hospital chain Dignity Health were among the most actively involved, while various utilities and banks also backed it.

Ten years after passage of AB 32, they claim cause for celebration. "We found 60 percent of investment in clean and renewable energy is coming to California because of our policies, not despite our policies," Pavley touted.

In fact, according to Next 10,  California clean tech companies received 68 percent — or some $9.8 billion — of total U.S. clean tech investment in 2015. The California Air Resources Board says that California has just about met the emissions reductions goal of AB 32, to reduce carbon emissions to 1990 levels. And the state's GDP growth rate doubled the nation's rate both last year and the year before.