Every year, air pollution causes some 6 million premature deaths around the region, and climate change and sea-level rise threaten to put some countries completely underwater. Lakes and rivers are undrinkable. Tropical forests are being stripped.

There is not one single model that all countries can follow to improve their situation; Asia is large and varied, and what works in Singapore might not work in Indonesia.

Still, some basic principles are the same everywhere. Smart and strong policies, innovative and incentivized companies and an engaged civil society are all crucial. Government, business, citizens — all have a role to play.

Responsibility for reducing carbon emissions and minimizing pollution and environmental degradation starts with individual governments. Governments need to set the rules with clear policies within which individual businesses and ordinary citizens can act. 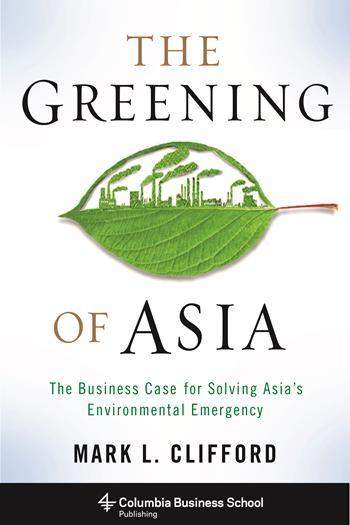 One important policy change that governments can undertake is the elimination of subsidies that encourage the use of fossil fuel, which total more than $1.9 trillion annually. Prices can have a powerful influence on behavior; users of fossil fuels should be forced the pay the real price for their choice, a price that includes health costs as well as the cost of carbon emissions.

In most countries, both the right to emit carbon and the right to use water are dramatically undervalued. By changing this systemic underpricing and using prices as much as possible to influence behavior, governments can force companies and individuals to make their own decisions on how to use these precious resources more efficiently.

Policies that fight the market, rather than embracing it, are more likely to fail.

Appreciating the increasingly favorable economics of renewable energy and environmentally sustainable policies is important to understanding that the greening of Asia is an economically sustainable goal. It would be naïve to think that price alone will be enough, but it is a bedrock principle.

Eliminating subsidies and correcting the mispricing of valuable resources are among a number of policy interventions that governments can use to promote sustainability; others include progressively tighter standards for building, vehicle and appliance efficiency; restrictions on carbon and pollutant emissions; and urban restrictions on vehicles, especially traditional gasoline and diesel cars and trucks.

Concerted government-industry-university R&D partnerships can be powerful — and businesses have a key and largely underappreciated role to play in the transition to a greener Asia.

Companies have financial resources that allow them to make investments, often investments whose useful life extends many decades, and they can adopt technology more quickly and often more effectively than governments. They are flexible, changing course as needed to meet the demands of their customers and other stakeholders — workers, shareholders, civil society and government.

Above all, good companies have human resources in the form of smart, capable and highly motivated employees who have a freedom to act that the public sector cannot — and should not — match. Business, in short, tries to get the job done as efficiently as possible.

Business needs to be given the incentives — both rewards and punishments — to ensure that it acts correctly; governments and civil society need to establish these incentives.

More broadly, in this age of hypervigilant social media, companies as a whole must be increasingly responsive to the broader community, or they risk losing their social license to operate.

In extreme cases, that can mean companies actually lose their assets, as some Taiwanese plantation owners in Sumatra, Indonesia, discovered in the 1998 political upheaval when nearby villagers simply took back land that they felt had been stolen from them. In less extreme cases, such as the melamine milk adulteration scandal in China, customers simply desert companies.

From the effectiveness of Greenpeace and Western activists in changing forestry practices to the campaign against eating shark’s fin, which has been heeded by such giants as Hong Kong Disneyland and Cathay Pacific, it’s clear that protestors and organized consumers have the power to push for sustainability.

Governments, businesses and civil society will, of course, be most effective when they work in partnership. That truism is especially apt in Asia, where consensus is prized as a political virtue.

The best hope of mitigating an ongoing environmental nightmare in Asia — and it is a hope, not a certainty — lies in strong government policies coupled with business-led innovation and investment, backed by support from society as a whole. Of course, in every success story, the balance of these three forces differs.

In Singapore, for instance, the government has led the response to resource and environmental challenges.

Key political leaders, influenced by strategic, economic and environmental concerns, implemented new policies — first on water, then on green buildings and finally on the fabric of the city. They built consensus from the top down, through ministry ranks and down to the grassroots level, using media, religious leaders and a range of civic organizations to educate and engage ordinary citizens.

In Hong Kong, support from businesses wasn’t quite so forthcoming. The city has a powerful business sector that has successfully fought many efforts to legislate environmental changes, and its government has been cautious about pushing through green laws.

But when businesses have taken the lead, change has come.

In 2012, after a group of shipowners and shipping lines drew up the Fair Winds Charter (a voluntary commitment to use low-sulphur fuel), the government provided a subsidy to reduce the cost of using this more expensive fuel. The shipping leaders wanted all ships to use the same standards, and at their request, the government introduced legislation making the cleaner fuel mandatory in the world’s fourth-busiest container port.

The Philippines provides another example of a successful government-business partnership — and it’s likewise a partnership in which the business, Manila Water, has played the leading role.

The company took over a service area where water supplies were erratic at best and absent at worst and where about two-thirds of the water leaked or was stolen from the aging pipes. Today, 99 percent of the service area’s population has reliable water, and stolen or leaked water has been cut to an impressive 12 percent.

Manila Water has also worked with the government on larger sustainability initiatives, like managing watersheds and operating sewage treatment plants. It has done all this while producing stellar returns for its shareholders.

The company still has a ways to go in winning over full popular support; Manila Water has been pilloried by critics who claim that it is profiting on a basic human need at the expense of poorer Filipinos.

A good example of the importance of civil society is seen in the enthusiasm with which the Japanese embraced energy conservation measures in the wake of the 2011 Fukushima disaster. This high degree of national cohesion was also reflected in the rapid adoption of policies designed to jump-start solar power.

The ensuing stand-off between large sections of the populace and the ruling Liberal Democratic Party over nuclear power is likely to emerge as a test case for citizen involvement in energy policy.

China’s vast size and its mixture of planned economy, powerful local officials and ambitious companies make it a singular case.

Government backing is there, as least in words; in his annual state of the nation address in March 2014, Premier Li Keqiang promised that the government would tackle air, water and soil pollution, as well as make changes in “the way energy is consumed and produced,” citing nuclear and renewable power, the development of smart grids and the nurturing of green and low-carbon technology.

If the past is any indication, speeches of this sort are more aspirational than literal. Still, that the Chinese premier devoted significant parts of his annual work address to the environment underscores the important directional shift under way.

At the top, officials clearly know that environmental challenges pose a significant problem. Yet China, generally regarded as a strong state capable of enforcing its will, so far has been unable to effectively implement a range of what appear, at least on paper, to be strong environmental protection laws, ranging from air pollution to water to food safety to building energy efficiency, due to resistance from local officials and powerful state-owned enterprises.

It remains to be seen if Li’s March 2014 declaration of a “war on pollution” will succeed.

Although the Chinese government hasn’t proven to be a reliable driver of sustainability initiatives, it has been able to support the rapid growth of renewable-energy companies, which parallels the growth of the corporate sector more broadly.

Both solar and wind companies have grown rapidly, and Chinese manufacturers now are globally significant in both industries. Local government provided the tax breaks, inexpensive land and bank loans that were pivotal in this rapid growth.

This growth (and the country’s policies) has forever changed the global economics of renewable energy, but it has also proved disastrous to many of the individual companies involved.

Indeed, many of China’s policies cause more environmental harm than good. The country uses far more scarce energy and at a far higher environmental cost than is needed, reflecting incentives given to local officials to prioritize economic growth and employment.

In addition, its electricity is priced inexpensively, in no sense reflecting the environmental externalities of an electrical grid that is 80 percent powered by coal. Oil, water and a variety of other resources are similarly underpriced, reducing incentives to use them more efficiently.

As of yet, there has not been a large-scale popular movement in China to address its growing environmental woes.

Japan and Singapore and, to a lesser degree, Taiwan and South Korea have all made environmental initiatives a matter of national pride. Local builders and architects vie for environmental efficiency. Companies strive to win awards for efficient, environmentally friendly operations.

This sort of bottom-up pride in energy-efficiency initiatives is something that China would be wise to nurture. Absent real enthusiasm from ordinary shoppers, students and workers in offices, factories, schools and shops, green energy efforts will fail to achieve anywhere near their potential.

Citizens can protest and sometimes vote; governments can set the rules; companies can provide the innovation needed for cost-effective solutions to energy and environmental problems.

Many hundreds of Asian companies that have the willingness, the money and the know-how to act. They need strong signals from their governments. Political leadership would ensure that the region’s companies use their impressive human and financial resources to nurture the growth of a greener Asia.

Spurred by Asia’s governments and supported by its cash-rich banks and capital markets, leading companies will use opportunities presented by its environmental nightmare to change the global economic landscape and, in some cases, overtake Western competitors in areas like solar and wind power, environmentally efficient vehicles and green infrastructure.

Just as Asia’s developed economies in Japan, Korea, Taiwan, Hong Kong and Singapore adjusted to higher wages by improving productivity and relying on better education and more innovation, so Asia will find a way to profitably do more with less in an era of resource constraints.

The great wealth and low population density in the United States give it the luxury of time when deciding how to respond to environmental challenges.

For Asia as a region and for its people as citizens of countries from giant China to the water-threatened Maldives, the fight against climate change, pollution and environmental degradation is more than a metaphorical fight.

The outcomes of this struggle will largely determine the region’s prospects for prosperity in the coming decades. Asia will have to win its cleanup fight if this is going to be the Asian century.

What can Hong Kong teach China about urban sustainability?