Business leaders call out the climate action resisters among them

As public pressure mounts, and utilities and automakers shift toward a low-carbon economy, fossil fuel companies find it harder to hide.

At the Global Climate Strike in New York City on Friday, activists held up human-sized signs depicting oil and gas industry executives with vampire teeth and blood dribbling down their chins. 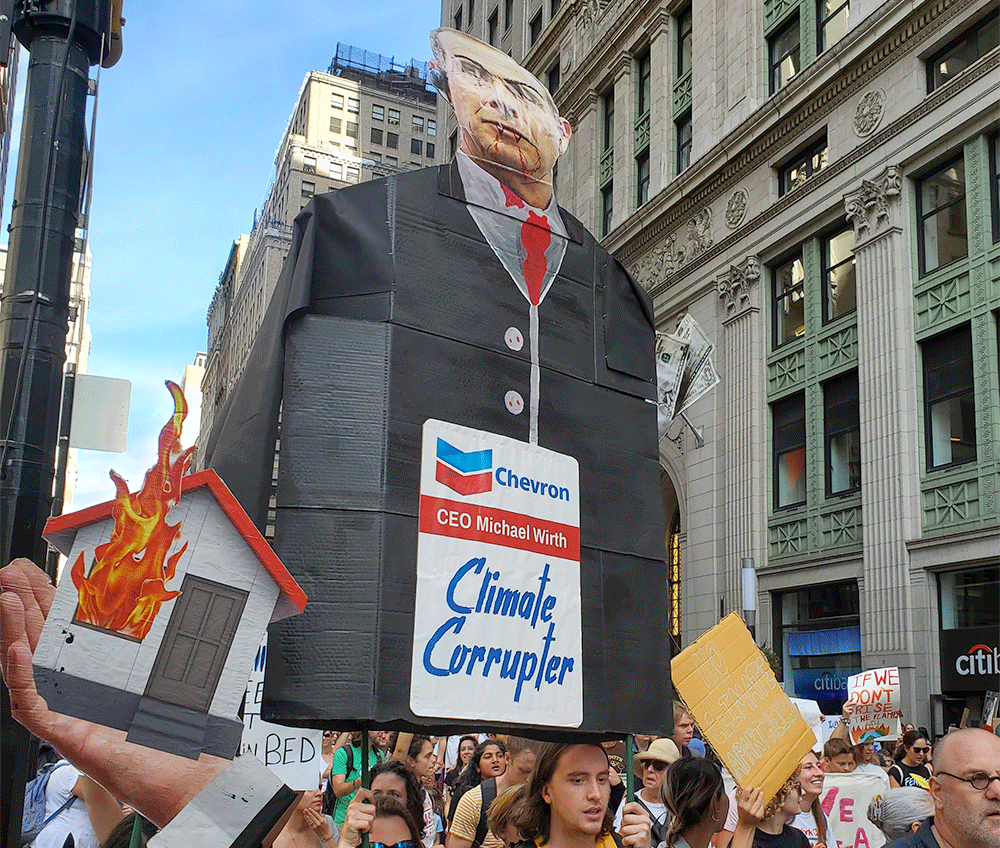 A few days later, leaders from the global business community gathered for the United Nations Climate Action Summit called out their fossil fuel counterparts, urging them to begin shifting toward low-carbon business models.

"The business community is still divided into two groups, the climate resisters and the climate tribespeople," Anand Mahindra, chairman of the Indian conglomerate Mahindra Group, said to a room packed with corporate executives, world leaders, investors and others. "I think it’s time we all stood up and told the climate resisters that you better pay your subscription and become a member of the tribe."

Mahindra is one of 87 major companies from a variety of industries that have committed to reducing greenhouse gas emissions to the levels scientists say are necessary to avoid dangerous global heating. Spearheaded by the U.N. Global Compact, the initiative calls on companies to set targets — across their operations and value chains — in line with limiting global temperature rise to 1.5 degrees Celsius above pre-industrial levels and reaching net-zero emissions by no later than 2050.

While the private sector overall is nowhere near where it needs to be to reach such targets, there is good news to be found in the actions of some corporations. Especially important is progress being made in the power generation and automotive sectors. Burning fossil fuels for energy accounts for roughly 70 percent of greenhouse gas emissions, with electricity/heat and transportation contributing the two largest chunks of that.

Crucially, energy companies such as American Electric Power, Enel, SSE and Xcel Energy have begun transitioning away from fossil fuels to renewable sources, while automakers such as Daimler and Volkswagen are fast increasing their electric vehicle production, according to a progress report from the Investor Agenda, a collaborative initiative to accelerate investor actions critical to tackling the climate emergency.

The oil and gas sector, particularly non-European oil and gas, is a problem. What that industry needs is transformational change. And these are companies that don’t want to make that transformation.

"We’re seeing wholesale progress in the power sector and the automotive sector," Andrew Logan, senior director for oil and gas at leading sustainability nonprofit Ceres, told GreenBiz. "The oil and gas sector, particularly non-European oil and gas, is a problem. What that industry needs is transformational change. And these are companies that don’t want to make that transformation."

As world leaders met Monday at the U.N., executives from 13 of the world’s biggest fossil fuel companies hosted a forum across town to promote a plan for increased investment in carbon capture, use and storage technology (CCUS). Experts agree that CCUS is necessary to meet the 1.5-degree target of the Paris Agreement. However, the fossil fuel industry and the Trump administration appear set on using CCUS to perpetuate current business models, rather than as a tool to reduce emissions while these companies transition to cleaner options.

"CCUS technologies have transformative potential," Steven Winberg, assistant secretary for fossil energy, said in a statement. "Not only will these technologies allow us to utilize our fossil fuel resources in an environmentally friendly manner, but the captured CO2 can also be utilized in enhanced oil recovery, which would help us maximize our energy production."

As the climate crisis becomes increasingly apparent, the sense of urgency to reduce carbon emissions by ceasing the extraction and burning of fossil fuels has grown.

In years past, the meeting might have gone unnoticed, but as the climate crisis becomes increasingly apparent, the sense of urgency to reduce carbon emissions by ceasing the extraction and burning of fossil fuels has grown. The media and the public are paying attention more than ever. When teen activist Greta Thunberg told world leaders, "We’ll be watching you," she just as easily could have meant oil and gas executives.

Investors are watching too, and they don’t like what they see.

Meanwhile, 200 major investors managing a combined $6.5 trillion in assets have demanded that companies stop lobbying for policies that harm the climate, both directly and through their trade groups. This would include efforts such as those by oil industry lobbyists that encouraged the Trump administration to weaken auto emissions standards.

"When you think of fuel emission standards, you think the auto sector would be most affected, but it’s the oil sector that’s most threatened because it threatens demand for their whole product," Logan said.

According to the United Nations­, oil and gas production needs to fall by roughly 20 percent by 2030 and by almost 55 percent by 2050 in order to meet the 1.5-degree target.

According to the U.N., oil and gas production needs to fall by roughly 20 percent by 2030 and by almost 55 percent by 2050 in order to meet the 1.5-degree target. However, new data from the financial think tank Carbon Tracker indicates that, since 2018, major oil companies have invested at least $50 billion in fossil fuel projects that would not be financially viable if the world were to meet the 1.5 degree target. ExxonMobil, according to a report from The Economist, plans to pump 25 percent more oil and gas in 2025 than in 2017.

Christiana Figueres, the former U.N. climate chief who attended the oil industry forum, also had a message for the chief executives, reportedly telling them they have the power "to either put a nail in the coffin of global efforts, or be the industry to deliver the solution."

Bio-recycling gets fashionable with enzymes that will eat your shoes

See all by CJ Clouse