Behind China’s new pledge to reduce the carbon intensity of its economy by 60 percent, peak its emissions and generate a fifth of its electricity from clean sources by 2030 are some huge business opportunities.

Even to this point, for this proud, once-isolationist nation to arrive at making carbon reduction pledges to the international community in advance of the U.N. climate meeting in Paris later this year involved a long engagement with Western NGOs and businesses — something only likely to grow.

What does a fifth of the power generated in a country with a $17 trillion economy and 1.36 billion people look like?

“It means over the course of the next 15 years, China will install as much clean energy capacity as the entire U.S. electricity system,” said Barbara Finamore, Asia Director of the Natural Resources Defense Council who launched the NRDC’s China operations in the 1990s and been a key facilitator ever since.

That's a lot of clean tech business opportunity. “Private sector know-how, expertise and investment are so essential for any of these policies to develop in a workable way and to be implemented,” she said.

Just Tuesday, China's National Development and Reform Commission announced that it wants to build a smart grid network for transmission and distribution of power and that it may rely on micro-grids to distribute clean power as it builds it.

Over the years, of course, dozens of U.S. companies have participated in China's efforts to go renewable and clean up its pollution. One avenue of that has been the China U.S. Energy Efficiency Alliance, an offshoot of Finamore's work in China, to which Pacific Gas & Electric, Nth Power, Southern California Edison, Puget Sound Energy, Bingham, Sempre Energy, Honeywell and others are partners. Through the Alliance, these utilities help China's power plants integrate energy efficiency into operations.

To be sure, pollution is what's driving China to pledge and to invest this time around. The thick smog clouding China’s cities and sickening its citizens compels China to cut back its dependence on coal and reduce its carbon and particulate emissions.

The air quality in 90 percent of China's 360 largest cities doesn't meet the country's own air quality standards, according to Greenpeace. Heavy industrial waste has poisoned rivers, lakes and reservoirs leaving roughly half the country's water supply unsuitable for drinking.

The fact that China has now submitted its Intended Nationally Determined Contribution (INDC) — as the country pledges in advance of the COP 21 meeting are called — is a huge about face from just six years ago when a climate agreement was expected at the COP meeting in Copenhagen but instead a blow out between the U.S. and China ensued, squashing any prospects for a deal at that time.

But according to NRDC officials who began working with Chinese ministries two decades ago to urge them to consider limiting pollution, the steps China is now taking and promises to pursue in the near future are huge by any measure and are something likely to spur other countries to step up their commitments as well as spur businesses to get involved.

To meet its clean energy goals, China has to grow that capacity from 7.4 percent of its electric generation now to 20 percent, or add the equivalent of 1.2 billion tons of coal from renewable sources, Finamore estimated.

Meanwhile, Fuqiang Yang, the energy, environment and climate change senior advisor for NRDC China, said "China’s climate targets signal its commitment to deepening the energy efficiency and clean energy efforts it began a decade ago, which have resulted in China becoming the largest wind power country in the world and being on track to pass Germany this year as the largest solar PV country in the world."

While China leads in manufacturing of solar panels and that has led to some lost market share for U.S. panel manufacturers, the myriad technologies that accompany renewable energy from sensors to smart grid software and hardware should see growing demand.

Energy efficiency technologies, including green buildings, will likely be part of the picture for China to reach its peak emissions goals.

To reach peak carbon emissions by 2030 and then start reducing emissions in a country whose torrid growth has been powered largely by coal plants will require it to all but halt adding coal generation. Already it has stopped opening new coal plants in its Eastern regions and has reduced overall coal consumption. its peak carbon promise also means it is willing to peak emissions per capita at a much lower amount of carbon than the peak reached per capita in either the U.S. or the European Union. 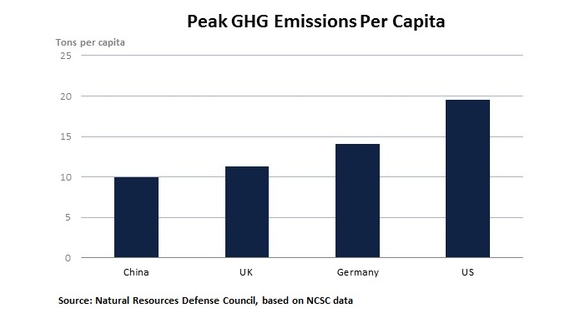 And tucked into China's voluminous  “intended nationally determined contribution” (INDC) towards the COP 21 negotiations are promises on carbon storage, limiting deforestation and and other policies that, taken in the business context, represent opportunity. It plans to implies an increase in forest cover by 124 to 247 million acres, which according to WRI is like foresting the United Kingdom twice.

How the West got involved

The NRDC was among a small handful of NGOs allowed in China a couple decades ago.

When the NRDC opened an office in Beijing in 1992, it had to tread carefully found little interest.

"It wasn't easy. When we started working in China there were no western NGOs and the international ones there were working on pandas and land preservation — nothing on clean energy — so nobody understood what we were trying to do or who we were," Finamore recalls of those early days.

However, China in the 1990s was awakening to the possible benefits of sustainability — and early evidence of its pollution problems — and it developed what was called Agenda 21 of actions the government wanted to take. It participated in the UN climate negoations in Rio.

But more important to China was economic development. Manufacturing took off with little regulation of what factories sent into the air or waterways.  China's pollution problems grew exponentially and now it produces more than a quarter of global GHG emissions.

The NRDC saw that China would at some point surpass the U.S. in carbon emissions — though it happened much sooner than they expected in 2005 — and it set up a program "focused on climate and energy efficiency," and environmental law and economics because those are NRDC's areas.

"But at the time we could not talk about climate change per say, it took another 10 years before China started discussing the need to reduce emissions" and it could not blame coal because that powered the bulk of China's economy.

What Finamore has done in China is help its government ministries see that China’s goal of economic development and new goal of reducing pollution can go hand in hand.

Through the China U.S. Energy Efficiency Alliance, she brokered deals between China power plant operators and California's Energy Commission and PG&E and other utilities to share technologies.  “The idea was to have a structure for the private sector to go to China and help them share their experience with China.”  They launched a demand-side management program for the power plant in Jiangsu province.

Now that seems to be a forerunner for a central government plan requiring national utilities to meet certain energy efficiency targets through a national demand-side management program for power plant operations.  Essentially, China concluded that to cut polluting emissions from its carbon heavy power generation fast enough it couldn't rely on switching to renewables alone. Energy efficiency had to be part of the plan.

Across the ocean, California in the mid 2000s was starting to show that energy efficiency and investment in renewable energy sources wouldn't slow down its economy. Before the U.S. recession that is, per capita energy use here was essentially flat while the state's economy grew.

From energy efficiency, China began considering alternatives to coal. In the past three years, when pollution worries grew and smog choked its cities, it made some progress.  Again with the help of NGOs as well as its own university  and government researchers, it has begun a strategy to reduce coal consumption, called the China Coal Cap Project .

In three regions — those around Beijing and Shanghai and the region across the water from Hong Kong — China stopped building new coal plants.

Last year for the first time, coal consumption dropped in China and so did carbon emissions.

But in the western part of the country, however, coal is still king and is powering industrial expansion.  So whether a drop in coal consumption can continue is an open question and not even the Chinese government is willing to bet that its carbon emissions will continue more than a one-year blip downward.