California and the rise of ‘sub-national’ climate action

From its solar panel-adorned rooftops to the influx of Teslas now populating area carpool lanes to a strong organic food sector, California is well known for its stereotypical green reputation.

What's much less clear is how the state's aggressive emissions targets and growing cleantech sector really translate on a global economic scale, when stacked up against world powers like China, the European Union or the rest of the U.S.

The state more than holds its own, according to a new report (PDF) by think tank Next 10, which named California the No. 2 least carbon-intensive economy in the world behind nuclear power stalwart France.

By putting the state's energy use, emissions and clean tech innovation in context with the 50-biggest greenhouse-emitting countries in the world, the report underscored the increasing importance of "sub-national," or state and local-level action on climate issues in the absence of a global framework.

The upshot: sub-national climate policies can complement economic growth, as they already have in California. The state has a GDP of $2 trillion, good for the No. 7 biggest economy in the world, prompting Next 10 to analyze the state's global climate leadership ahead of the UN Climate conference slated for December in Paris. 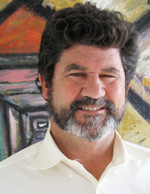 "We thought it was time to broaden our scope," said Next 10 Founder Noel Perry, noting that the organization has produced a California-specific Green Innovation Index for the past six years. "The state has been a model in many different ways… in terms of the work we’ve been doing with energy efficiency and renewables."

On Tuesday of this week, California Gov. Jerry Brown upped the state's role yet further, signing a multinational agreement with leaders from from 11 other states and provinces to limit greenhouse gas emissions to below 2 degrees Celsius — that, the threshold at which United Nations climate scientists have predicted would unleash irreparable harm.

Gathered from locations as far-flung as Wales, UK and Acre, Brazil, as well as Vermont, Oregon, Washington and provinces in Mexico, the group said their collective economies represent $4.5 trillion in GDP and 100 million people.

Even if their national governments do not reach agreement in Paris COP 21 meeting next fall, these regions will. Specifically, they agreed to reduce greenhouse gas emissions from their regions 80 to 95 percent degrees below 1990 levels by 2050.

Overall, Next 10 found that California emits about 1 percent of the world's energy-related greenhouse gases and still ranks No. 31 on emissions per capita.

More glaring than California's environmental footprint, however, is the state's illustration of the evolving relationship between economic growth and environmental impact.

As of 2012, California was No. 1 for energy productivity, No. 2 in terms of total electricity generation from renewable energy sources and tied for No. 2 in adoption of electric vehicles.

"I was surprised to see how well California did," Perry said in an interview with GreenBiz, adding that the report underscores a "deep and sustained shift to clean energy." 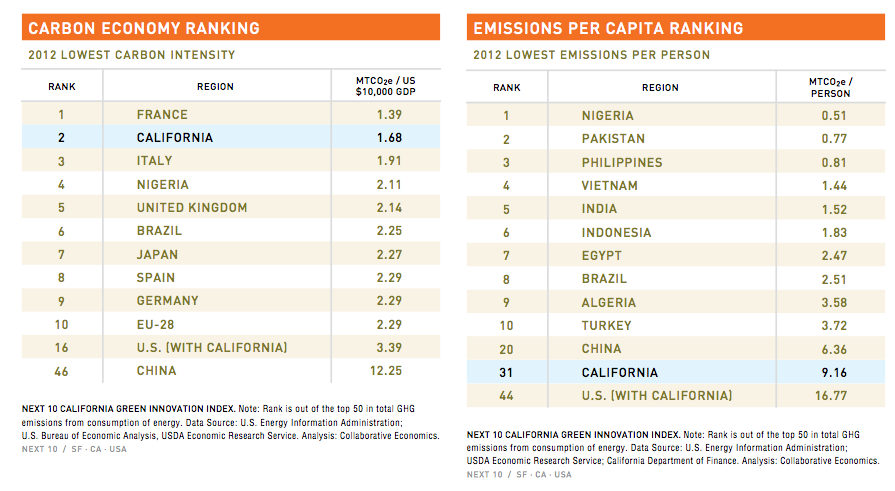 Perhaps less surprising given the rise of Silicon Valley-bred cleantech startups like SolarCity and Uber, California also received almost half of the $11 billion worth of cleantech venture capital funding doled out in 2012. A full 7 percent of global cleantech patents were filed by California residents last year.

"The concept here is exactly growing the economy and reducing emissions," said Doug Henton, author of the new Next 10 report. "We believe the way to do that is innovation — doing things in different ways.”

Though California has been making headlines for aggressive carbon-reduction targets for years — most notably with the 2006 passage of the Global Warming Solutions Act, AB 32 — which set a goal of rolling emissions back to 1990 levels by 2020.

Then, last month, Gov. Jerry Brown upped the ante by announcing a new objective of cutting emissions another 40 percent by 2030.

The state's major cities have also been a hot bed for experimentation with local climate resilience strategies, with San Francisco last year becoming the first city in the world to hire a chief resilience officer. Los Angeles, a city synonymous with urban sprawl, also recently released a first-of-its-kind urban planning strategy that hinges on cutting emissions, saving water and deploying renewable energy in tandem with adding housing and transit options.

Other cities around the world, from New York to Tokyo, are also deploying local initiatives to combat the ill-effects of climate change, leading some to speculate that cities and states — bound by less bureaucracy and politics than national governments and international bodies — hold the real keys to action on climate issues.

That optimism is buoyed by the hype around smart cities technologies, which promise more precise sensor-based data on emissions, waste and other resources, in turn raising big questions about funding, private sector involvement and potential pitfalls like being overwhelmed by numbers or ensuring data security.

Perry, however, doesn't see local and non-local climate action as a zero-sum game.

"We certainly hope that the Paris meetings in December are successful," he said of the upcoming COP 21 UN meeting.  "I think that it works concurrently to have sub-national agreements."

In particular, he said state and local initiatives like California's can serve as a testing ground for policies and emerging technologies. California's boom in solar energy and faster adoption of electric vehicles are two examples.

The report notes that in addition to California's own cap-and-trade system and standards for renewable energy and emissions, the state also "is working directly with countries, U.S. states, and other sub-national entities to share and leverage its experience."

Report author Henton adds that state and local jurisdictions may also be wise to prioritize areas of climate policy where they are likely to have a larger impact.

"Particularly in the U.S., states have the ability to set standards for energy efficiency and renewable energy portfolios and how they regulate utilities," he said.

He singles out other notoriously politically-progressive states, including New York and Massachusetts, along with global renewable energy leader Germany, for taking proactive measures in these arenas.

The next step: figuring out how to foot the bill for new approaches to sustainable growth without hamstringing the economy. 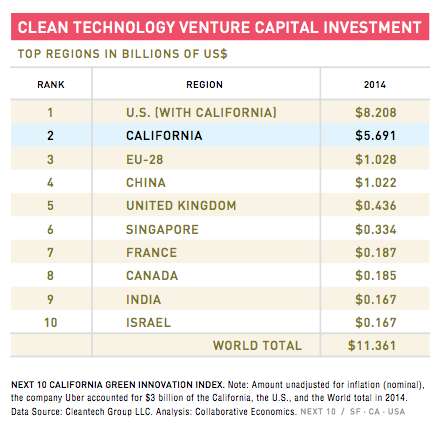 The business of solar has mushroomed in the last two years after navigating financial volatility associated with the price of photovoltaic panels. Now, as energy users look to comply with emissions cuts, solar providers in the state have also deployed refined financial models to lower up-front costs and encourage investment, which is further encouraged by government incentives.

"Favorable policies have encouraged investment," Henton said. "You start seeing this critical mass of new business models. That begins to spread to other areas of the U.S. and even globally."

And it is new business models outside the real of traditional clean technology that have provided the biggest windfall for the state.

Ridesharing startups like Uber account for more than half of the $5.7 billion in cleantech venture funding invested in California companies during 2014, illustrating the broad potential of transitioning high-impact industries to carbon neutrality.

"In an ideal world — and maybe it will someday be that world — it would be possible to make all of our goods and services with no emissions," Perry said.