Recent reports on California’s cap-and-trade program could mislead observers to conclude the system is "collapsing" and undergoing a "meltdown."

But hyperbole isn’t reality, and quite the contrary, the state’s climate policy is succeeding — the most recent data show California is just 3 percent above its 2020 goal of reducing emissions to 1990 levels as required by AB 32. Meeting California’s 2020 greenhouse gas emissions goal is turning out to be easier and cheaper than expected.

As California has driven emissions down, its economy has taken off: State job growth has outpaced the rest of the nation by 50 percent (PDF), showing what decoupled carbon emissions and economic growth look like.

The result drawing so much attention is the California Air Resources Board’s (CARB) most recent allowance auction. Allowances are the tradable emissions permits polluters need to comply with the cap-and-trade program, and auctions are the main way emitters acquire allowances.

As California has driven emissions down, its economy has taken off ... showing what decoupled carbon emissions and economic growth look like.

In the first 13 auctions, all allowances offered for use in the current compliance period sold out at or above the floor price. The price floor is the minimum price at which CARB auctions will sell permits. However, in the last two auctions, demand was not strong enough for CARB to sell all current vintage allowances at the current price floor of $12.73 per ton.

While just 5 percent (PDF) of current vintage permits went unsold in February, 90 percent (PDF) of the current vintage permits went unsold in May. Companies held back from buying the permits because they already held enough to account for their current emissions, or they expect to be able to make emission reduction for less than the cost of an additional permit.

So if demand for carbon market allowances is weak, how can California’s climate program be on track overall?

The answer is simple — the state’s other climate and energy policies are lowering emissions, reducing the need for emitters covered under the cap-and-trade program to acquire allowances. California's suite of performance standards — such as efficiency standards for buildings and appliances, the renewable electricity standard for utilities and the low carbon fuel standard for transportation fuels — are principally responsible for falling emissions.

While most observers see little merit in this legal action, a California district court issued a set of questions to parties in the suit in April. The decision to issue these questions was read as increasing chances the court will side with the petitioners, potentially disrupting program implementation.

The smart money is still on the courts upholding the current program’s approach to using revenue through a Greenhouse Gas Reduction Fund because CARB has rigorously required that any spending of revenue raised through auctions must be spent in ways that reduce greenhouse gases. Specifically, uses must meet the Sinclair test for what constitutes a fee versus a tax under California Proposition 13.

Nonetheless, some legal risk exists. Greater legal uncertainty dampens demand for allowances by reducing confidence they will be needed in future years.

In May’s auction, CARB had not yet defined the shape of the cap-and-trade program after 2020, but it clearly intends to use cap-and-trade to help meet Gov. Jerry Brown’s ambitious target of reducing emissions 40 percent below 1990 emissions. In July, CARB released a specific proposal extending the program to 2050.

Figure 1 shows the new decreasing caps through 2031 included in the proposed regulation: 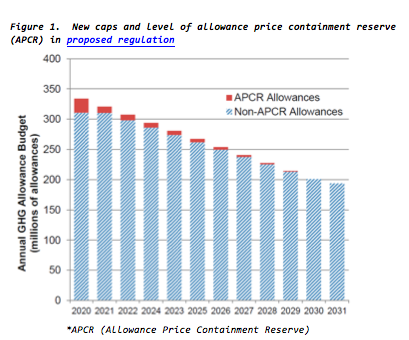 CARB’s specific cap-and-trade program extension can be expected to provide some added support for demand at the next auction, although it probably will not fundamentally change auction dynamics in the absence of greater legal certainty. The Brown administration argues that its existing authority provides the legal basis for extending the cap-and-trade program in this way because AB 32 includes no sunset provision and calls for CARB to "maintain and continue reductions in emissions of greenhouse gases beyond 2020."

Some observers, such as the state’s legislative counsel, believe additional legislation will be required for such an extension. The answer to these legal debates will become clear only when the courts issue a final ruling or new legislation makes the issue moot.

Figure 2 charts market prices on this exchange in relation to the floor price (through July 13). 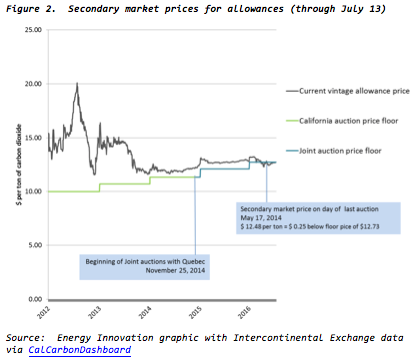 Since then, prices have recovered, rising over the last 30 days to an average of $12.65/ton in the secondary market. Over the past week, prices have averaged $12.69, just 4 cents shy of the floor. Nonetheless, the fact that the secondary market remains below the floor price suggests that the next auction will be more like the last than the first 13.

CARB’s new proposed regulation (PDF) also would provide a stronger mechanism to correct for a situation in which supply exceeds demand — as indicated by unsold allowances at auction. This new feature that would divert unsold allowances from auctions to the allowance price containment reserve (the "reserve"). The reserve is the most direct cost containment device in the cap-and-trade program. It is a pool of allowances made available at special auctions if allowances rise to predetermined thresholds, currently $47 per ton. This provides downward pressure on allowances prices should cost pressures begin to emerge.

Currently, unsold allowances are made available again at auction when prices rise above the floor. This will continue. However, under the newly proposed design feature if demand fails to increase above the floor price for eight auctions in a row, or about two years, CARB will begin adding unsold allowances to the reserve. At that time, they would be available only at special reserve auctions, which take place only if prices reach a high price threshold, currently $48 per ton and rising over time.

Once formally adopted, this design future also would put upward pressure on demand at auction. Companies will face a stronger incentive to buy at relatively low prices today in order to hedge against higher prices in the future.

CARB’s cap-and-trade design has been fundamentally sound from the start, and only continues improving. The new plan to send allowances to the reserve if they are not sold at auction effectively strengthens the automatic stabilizers in the program.

The cap-and-trade program was never intended to be a revenue-raising measure.

While the unexpected auction results are inconvenient, unsold allowances do not constitute a failure. Although political waves are understandable, the cap-and-trade program was never intended to be a revenue-raising measure — its primary purpose is to provide an economic incentive to reduce emissions in a cost-effective way, and here the program is an unquestioned success.

CARB’s cap-and-trade design and California’s overall approach of a strong suite of performance standards with a carbon pricing overlay remains the state-of-the-art in climate policy. So while breathless reports tell of California cap-and-trade’s imminent demise, we should all pause to inhale and consider how technology and policy innovation and faster-than-expected economic decarbonization instead anticipate climate success.

See all by Chris Busch