Gavin Newsom demonstrates a lot of nerve, poking his finger in the eye of President Donald Trump on Tuesday at GreenBiz Group's VERGE 19 Conference, citing "his posture, his denialism, his ignorance, his stupidity, his arrogance."

The California governor was talking in part about the White House's ongoing battle to deny California the right to set its own tailpipe emissions rules. The state scored a win this summer when BMW, Ford, Honda and Volkswagen agreed to lower emissions on new vehicles according to the state's standards rather than the lower ones the current federal administration wants.

"That has put Trump in this unbelievably powerless position to be frustrated to no end," Newsom said on stage, with the moxie only someone perceiving to have the upper hand might risk. "Only California can do that. This state punches above its weight. It’s not a small, isolated state. There’s no navel-gazing. We move markets and the private sector gets it."

Newsom is not the only California leader with such a bullish view on the state's climate leadership in the face of federal failure and sabotage. Mary Nichols, California Air Resources Board chair, and Oakland Mayor Libby Schaaf later echoed some of his sentiments.

With the world’s fifth-largest economy, California behaves in some ways as a nation-state — and where it leads on socio-political trends, ultimately, others follow. The state adopted its earliest emissions standards back in 1967, for instance, and since it updated emissions rules in 2004 at least 14 other states have followed. California itself continues to tighten its emissions and air quality standards, such as the first "smog check" for diesel trucks. And it has committed to seemingly every climate pledge possible for a state, including the Paris Agreement and beyond. Last year it vowed to achieve zero-carbon energy by 2045 (PDF) and 50 percent renewables by 2030, all while beating its goal to reduce greenhouse gas emissions by 2020. The Golden State's outsize presence in low-carbon innovations spans from the policies out of Sacramento to the myriad technologies issuing from Silicon Valley. 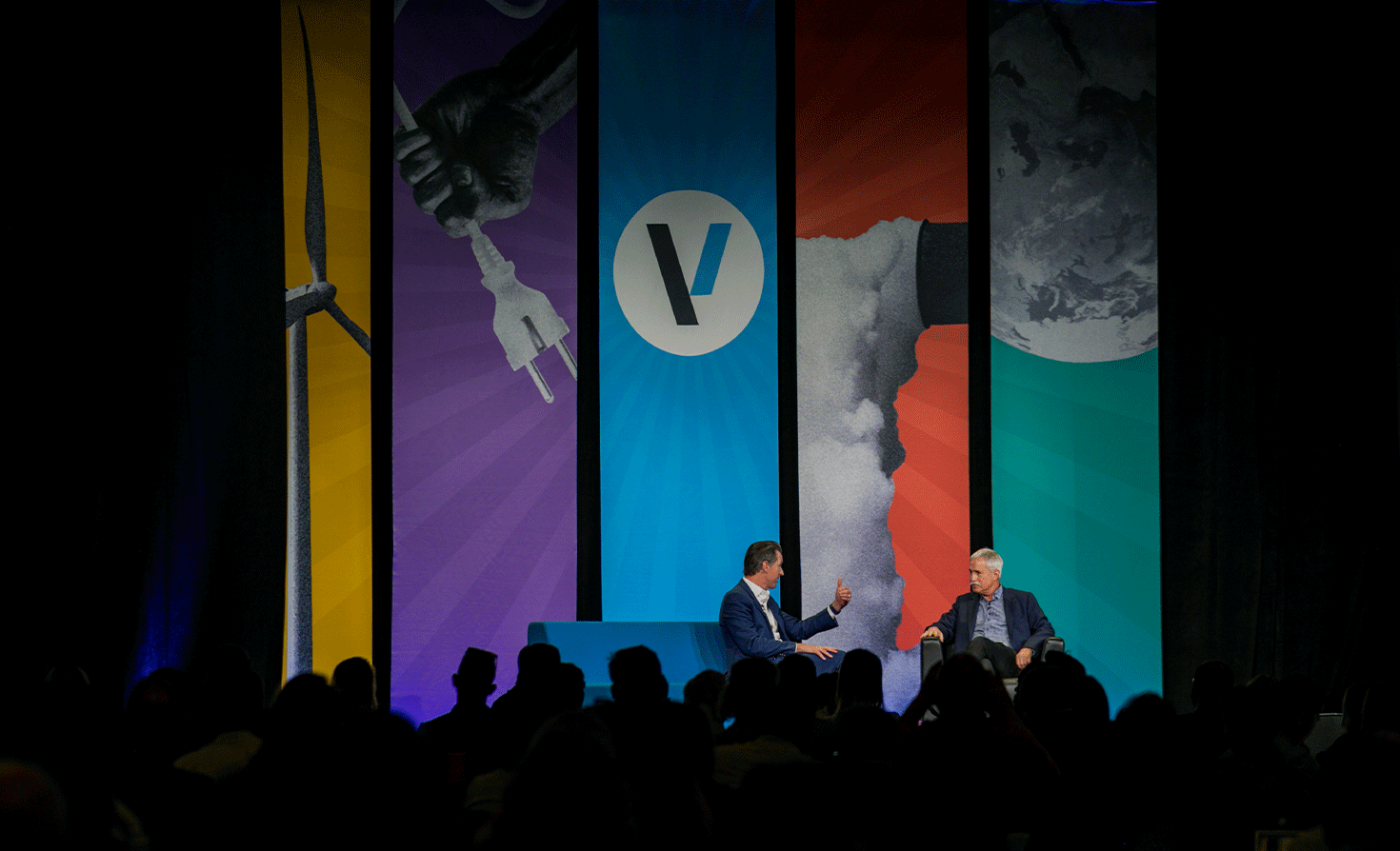 Meanwhile, there's that federal executive branch with which to duke it out. California Attorney General Xavier Becerra has filed some 60 lawsuits against the Trump administration, already succeeding on many.

"It’s defense and offense — but the best defense is an aggressive posture and an aggressive alternative to the status quo," Newsom said. "Look, success leaves clues; the power of emulation. California is proving what you have all been asserting, and we’re doing it at a scale no one else is doing."

Nichols pointed out the historical roots of some of California’s precocious advancements in cleaner air and energy. She was the first person to file a lawsuit against the U.S. Environmental Protection Agency under the Clean Air Act in the 1970s, and she oversees California's current fledgling cap-and-trade program. Nichols said the state is on "solid ground" in battling the Trump tailpipe emissions rollbacks.

Newsom explained how he hopes to continue the work his predecessor began to advance low-carbon policies. Meanwhile, there's that federal executive branch with which to duke it out.

"What is at stake is California’s fundamental right under the Clean Air Act to enforce the clean air standards," she said. "We’ve also demonstrated over time that by moving faster and further than the federal government is able to do politically, we’ve been able to move the whole [automotive] industry, not just in California but now increasingly around the world, in the direction of more advanced technology in clean air vehicles."

And the revolution to decarbonize transportation that's moving forward around the world has been decades in the making. "It is helpful to have the experience from the early days of the Clean Air program, to see some of those things we’ve been through and how we’ve overcome some of those," Nichols noted.

Yet there are shadows to all the sunny depictions of California's climate-friendly intentions. Northern California's main utility PG&E appears to be preparing to issue its second set of power blackouts in two weeks to reduce wildfire risk to hundreds of thousands more households. And even though the state met its emissions-reductions goal ahead of 2020, those international measurements don't take into account the impact of wildfires or even air travel.

Another glaring problem is the state's savage housing inequality. As the autumn rainy season has transformed into a fire season, California's wildfires are among the earliest warning systems of climate impacts in the United States. The impossibility of affordable homes for the "missing middle" classes begs the question of what will happen to climate refugees from places such as Paradise.

Newsom admitted as much. "Where California has failed — and I say it lovingly and respectfully — is on inclusion," the fifth-generation Bay Area resident said. "I don’t need to give you any more evidence than to walk the streets of Oakland, San Jose, Los Angeles, Bakersfield or Modesto for that matter. ... It’s about, yes, environmental justice and economic justice. It’s about addressing those who have been left behind," he said, adding that an economic engine can't work without equity.

As the autumn rainy season has transformed into a fire season, California's wildfires are among the earliest warning systems of climate impacts in the United States.

Newsom called for a "Marshall Plan" for housing at his inauguration, and still sees it possible to build 3.5 million homes in the state by 2025. Yet at this rate, the goal of half a million new homes per year appears stalled.

Tent cities aside, Schaaf applauded her city's "vibe" and activism on climate action, such as in joining hundreds of other cities in sticking to the Paris Accord. "Local government is where it’s at," she said, citing "the innovation, the hunger, the openness to try new things."

And Oakland is a champion of bringing together tech equity with climate action, she said, describing the possibility of banning natural gas in new and existing buildings in the city, potentially helping to improve indoor air quality for vulnerable populations. "This is not only about climate change."

What should business leaders in sustainability demand of California's policymakers?

Newsom called for the audience not to "roll over to the tyranny of what’s happening in Washington, D.C.," and also encouraged the business community to challenge California's policymakers. "Be audacious in your expectations," he said. "Hold us to account. Don’t hold back."