This exclusive six-part series takes an in-depth look at California’s transition to over 50 percent renewable electricity. In the face of President Trump’s apparent indifference to global warming, the state has become a beacon of hope for climate activists. The entire series will appear here. Read Part I here and Part II here.

Much as social inclusion has become the new watchword for California’s climate bills, so too has regionalization. For electricity, that means designing a larger, more geographically inclusive grid — a grid that includes multiple neighboring states.

This is one of the main messages of the low-carbon grid study pioneered by the Center for Energy Efficiency and Renewable Technologies (CEERT). "You need that," said V. John White, CEERT’s executive director, "to get the balanced portfolio we want." The key is to let California trade more green electricity with neighboring states (and vice versa) by expanding the reach of the existing wholesale market.

That enterprise is now run by the California Independent System Operator (CAISO). It was formed in 1998 when the state restructured the electricity sector, requiring utilities to cede operational control of their long distance transmission facilities to the new Independent System Operator (ISO), and to separate their power generation plants from the local substations and wires used to serve local customers.

In addition to managing a sprawling, 26,000-mile high-voltage transmission network, which stretches from the Oregon border to Mexico, the CAISO is responsible for supplying enough energy to meet the round-the-clock demands of over 80 percent of the state’s residents. It is now being enlisted in the state’s climate battles as well.

Changing the CAISO from a state-wide to a regional grid — a Western ISO (WISO) — has proven to be a heavy lift. Governance is a major issue; the ISO’s five-member board is selected solely by California’s governor; that is untenable for a regional ISO. As yet, a workable multi-state solution has yet to emerge but CEERT remains hopeful and has helped to promote a new "Fix The Grid" campaign to boost public support for reform.

Pending a political fix, the ISO has moved to connect out-of state generators on a voluntary basis, led by one of Berkshire Hathaway’s affiliates, PacifiCorp, which produces electricity in several other Western states. At the retreat, Jonathan Weisgall, a senior Berkshire Hathaway executive and former CEERT co-chair, noted that the resulting "energy imbalance market" for trading electricity between wholesale producers already had diversified PacifiCorp’s coal-heavy power mix. It has also helped to reduce the cost of sourcing green energy for California consumers.

You have to find a way... for renewables do more than just provide energy. Renewables must be good grid citizens. They can’t just be free riders.

White flagged one final take away from the center’s grid study. "You can’t ignore this," he told me during various conversations. "When you begin to run a grid largely on renewables, and you don’t have gas or nuclear plants doing much of the work, then you have to find a way — you’ve probably got to require it — for renewables do more than just provide energy. They must take over the support services, the secondary stuff that the grid needs. Renewables must be good grid citizens. They can’t just be free riders."

The ancillary services noted by White, often termed "reliability" services by grid managers, make it possible to match supply and demand for electricity at any given moment, making up for minor shortfalls or quickly paring energy to balance demand. In practice, this also involves keeping the grid’s frequency within bounds, in the U.S., centering on a current that alternates at 60 cycles a second.

Reliability services also help to hold the voltage steady across thousands of miles of regional transmission cables, switching stations and local interconnection points. This is done with something called "reactive power;" it is measured in VArs, Volt Ampere-reactive units. Unless a grid instantaneously can access reactive power, transformers may trip off line; some consumer devices may also get "fried."

Picture the grid as a large community reservoir.

Aside from the CEERT crowd, it is probably safe to assume that few electricity users have much of a clue about VArs or any of the other reliability services listed above. So to better grasp their importance, it may be helpful briefly to interrupt the current narrative and take a closer look. An analogy may help.

Picture the grid as a large community reservoir — one kept filled through hundreds of gauge water pipes, each fed by a separate source (including river systems, lakes, springs, underground aquifers). The flow of water from some sources is highly predictable.

For many others, however, only rough forecasts are available (think wind). The volumes and the rate of flow vary considerably throughout the day and from week-to-week. Even so, the reservoir’s manager must maintain the water level at exactly the same level every moment of the day 365 days a year.

But that is not all. The level must be controlled while everyone in the community takes out as much water as they need. Many users connect small hoses, others larger ones, and every day the pattern of water use changes. New pipes are added and some disconnected. All of this activity complicates the manager’s task of instantaneously keeping the water level "in balance."

The challenge is manageable but it affects the whole system.

To take the analogy one step further, imagine a wonderful new water source is discovered. This particular source — fed by a large glacier, perhaps — only flows for about eight hours a day, but it does so every day. It’s predictable, cheaper and environmentally preferable, but the volume swings wildly, taking less than two hours to go from a trickle to flowing at full force.

Managing the new source is easy so long as the water it adds is a small fraction of the overall flow. (Remember, the entire reservoir system must balance inflows and outflows at all times.) But what happens when this all or nothing flow suddenly gushes enough water every day to supply a quarter of the entire system’s water needs?

Welcome to California’s emerging electric grid. Solar PV supplied less than 0.5 percent of all the state’s electricity in 2010. By 2020, solar PV might supply as much as 25 percent of electricity on some afternoons. The challenge is manageable but it affects the whole system. More on this later on.

Now, what about the reliability services ? To keep consumers happy, the water pressure must be kept constant at every pipe coming in and out of the reservoir. You can think of pressure as an analog for voltage. Keeping the pressure constant takes more than just adding or subtracting water; a quick increase or reduction in pressure is needed. That is one reason why water systems use pumps and water towers.

Then there is frequency. It’s similar to maintaining the water level of the reservoir within a defined range, even as the overall balance between demand and supply are changing. On the grid, when frequency wavers, a response must be provided within milliseconds (to curb the deviation). A secondary response (to prevent subsequent fluctuations) may be needed for up to a minute or more. That takes some unique buffering services too and, like voltage control, it cannot be done simply by adding or subtracting energy.

Solar and wind generation will soon provide at least a third of California’s energy.

Until quite recently, controlling frequency and voltage on the grid, like managing the moment-to-moment variations in energy to balance demand and supply, were almost exclusively provided by a couple of hundred mainly fossil-fueled, central generating stations. The equipment at these stations was technically designed to deliver not only energy but reactive power and frequency response services.

However, as the La Jolla retreat made clear, solar and wind generation soon will provide at least a third of California’s energy, and that may double within a decade or so. If you don’t want to keep relying on natural gas-fired plants to fill the gap — and that is a key objective of CEERT — renewables must take over more of the job of balancing energy supplies (leveling the water) as well as normalizing frequency and voltage (pressure and temperature). 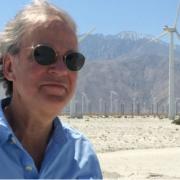