What happens when you give 10 aspiring social entrepreneurs $100,000 and nine months of free advice on how to make their business models work for cities facing major growing pains?

That's what Boulder-based startup accelerator the Unreasonable Institute and philanthropic titan the Rockefeller Foundation hope to find out with a new Future Cities Accelerator launched late this summer.

Funded by $1 million from the foundation, the accelerator is accepting applications through Sept. 25 from both for-profit and nonprofit ventures developing products or programs to tackle social equity challenges in cities. The United Nations projects that the global population will grow to some 9.7 billion people by 2050, with increasingly dense cities in Asia, South America and Africa expected to bear the brunt.

Learn more about smart and resilient cities at VERGE 16 from Sept. 19 to 22 in Santa Clara, California.

The central question for the new Future Cities Accelerator, which is starting out with a North American focus: "How do you make cities work for the most poor and vulnerable populations?" Sean Kuusinen, the Unreasonable Institute's director of Accelerators & Internal Operations, told GreenBiz.

As U.S. cities from Los Angeles to Washington, D.C. to New Orleans are learning from new types of interdisciplinary sustainability planning efforts, that question can lead in several directions. Increasingly, perennial urban issues such as housing affordability and traffic gridlock are colliding with macro environmental issues such as climate resilience, disproportionately poor air quality or the potential effects of sea-level rise on different demographics.

How do you make cities work for the most poor and vulnerable populations?

Kuusinen said the Future Cities Accelerator plans to cast a wide net with its application process to account for the breadth of issues involved in planning for the next generation of cities. Winners will be announced just after the new year.

"We’re looking for folks who are solving energy problems, transportation, housing, homelessness, Internet connectivity," Kuusinen said. "We want to find the 10 organizations who have the most potential to create impact at scale."

For those who hit on promising proposals, the accelerator will provide the $100,000 grant along with a temporary chief financial officer and nine months of advising from mentors such as Google X Founder Tom Chi.

Already the group is seeing a range of applicants, some with explicit environmental goals and others focused more broadly on economic opportunity.

Cities are undoubtedly having a moment.

On top of the mind-boggling population projections, a wave of connected devices tailored to urban environments spurred by the smart-city craze and the Internet of Things are being rolled out by tech startups, multinational corporations, nonprofits and others.

One new white paper (PDF) by Siemens pegs the private investment potential of smart cities in the U.S. alone at north of $32 billion, driven by market interest in several areas: 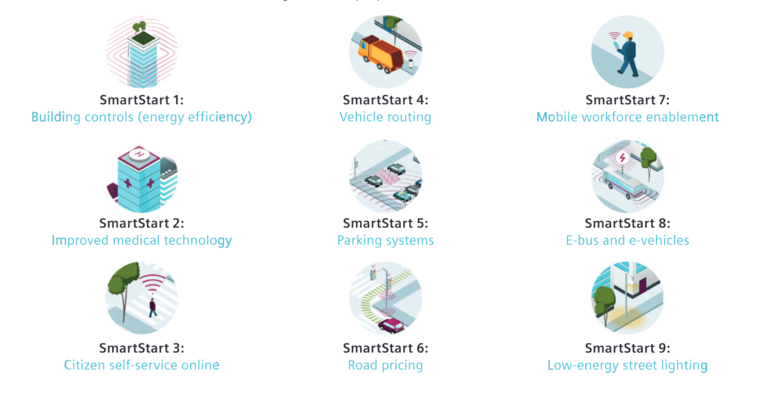 How sustainability figures into all of that — and particularly sustainability outcomes that stand to improve the lives of poor residents of cities — isn't always cut and dried.

With even bigger picture issues, such as adapting cities to be more resilient in the face of extreme weather such as drought or severe storms, many dots are just now being connected to climate change by researchers. Just look at Syria, where studies in just the last year have started to connect a drought exacerbated by climate change to social and political conflict.

"We certainly consider the sustainability piece of it," Kuusinen said. "There’s so many manifestations of the climate issues we’re facing that can be hard to link back directly."

Building toward sustainable, resilient cities in 2050

Are our cities about to get a lot smarter (and greener)?