Can this app solve our coffee cup problem?

This article was adapted from the GreenBiz Food Weekly newsletter. Sign up here to receive your own free subscription.

This week I want to talk about our coffee cup problem. Nearly two in every three Americans drink coffee, and many of us grab a cup to go. That’s a lot of cups. Because most disposable cups can’t be recycled, it’s also a lot of waste headed to landfill. And that’s just one drink in one country. Worldwide, hundreds of billions of disposable cups end up in landfills every year.

I got an Americano to go this week at Ritual Coffee Roasters in San Francisco, but it didn’t come in a disposable cup. This is what I saw when I entered the store: 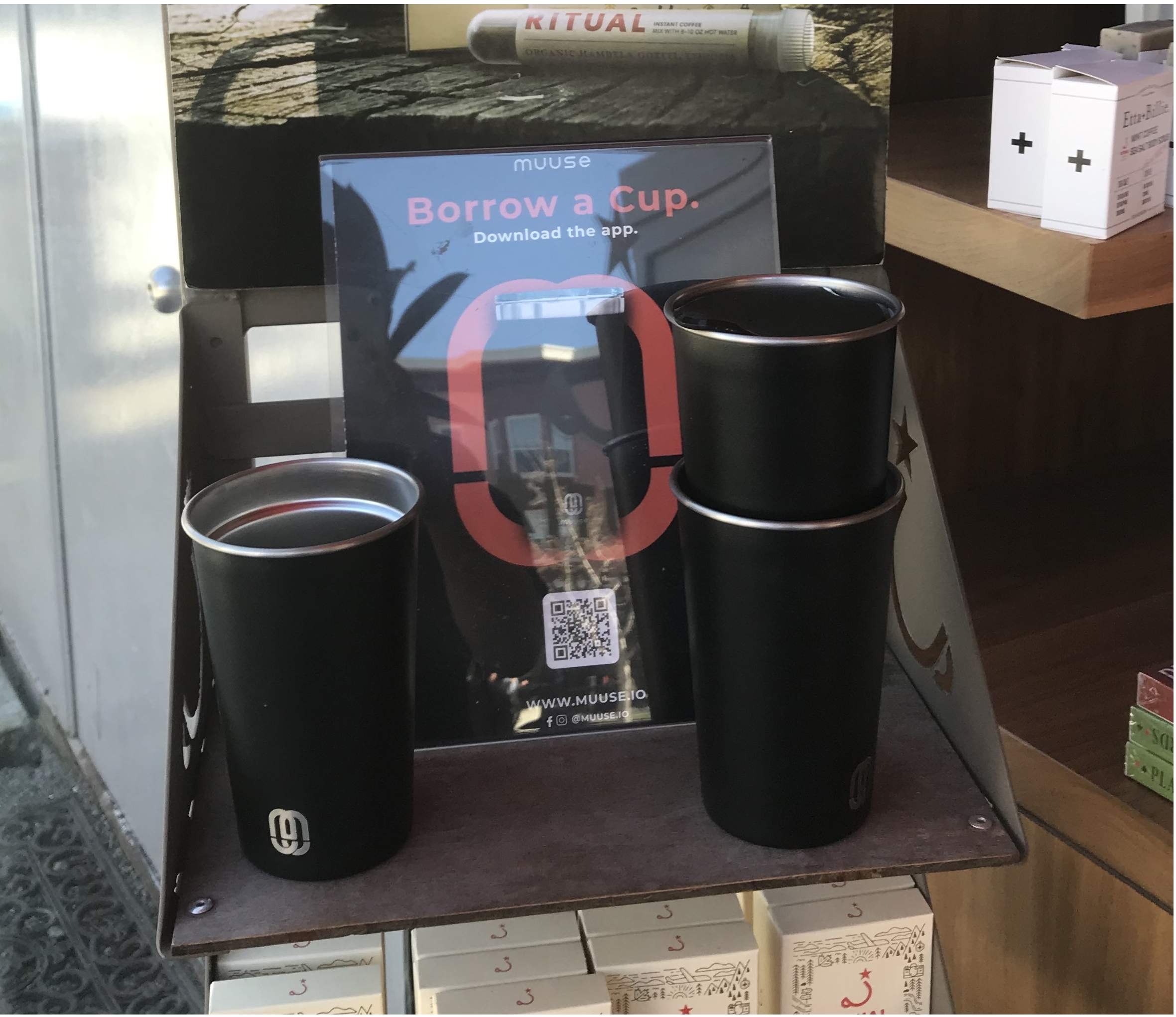 My photography is poor, but hopefully you can make out the "Borrow a Cup" sign. To do so, I downloaded an app from Muuse, the startup behind the scheme. Then I scanned the QR code on the underside of one of the black stainless steel cups that can be seen in the photo. I ordered as normal, scoring a 25-cent discount for using my own cup. Once I was done, I had the option of dropping the cup back at any participating coffee shop.

So is this the solution to our coffee cup problem?

There’s a lot to unpack. I’ll start with the positives, which I think are meaningful. Muuse’s digital team did a great job, and the app was a breeze to use. Getting set up and checking out my cup was about as easy as registering with Uber and hailing a ride. The cup is also nice to drink from. Plus a 25-cent discount adds up if you get coffee regularly. For people who get coffee from the same place several times a week, Muuse already makes sense.

Now to the big challenge: ease of use. Reusable cups are competing with an incredibly convenient incumbent, because paper cups are free and can be disposed of anywhere. The Muuse app is well done, but I still had to go to the app store, download it, register, enter my credit card details, check out a cup by scanning a QR code, then scan another code when I returned the cup, which required me to go back to a coffee shop. Beyond the eco-minded consumer, how many of us will be motivated to do all that?

Reusable cups are competing with an incredibly convenient incumbent, because paper cups are free and can be disposed of anywhere.

I chatted about the convenience factor with Forrest Carroll, Muuse’s chief financial officer. He had several answers, some of which were about scale and frequency of use. Once you have the app, he pointed out, checking out a cup takes seconds. As more coffee shops join, returning cups also becomes easier. In addition, Muuse is working on integrating an ordering system into the app, similar to one that Starbucks already has.

Carroll also pointed to cost as a motivator. Alongside coffee shops offering discounts, some cities are forcing customers to pay for disposable cups, which some research suggests does more to shift consumer choice than offering discounts. (In the case of Berkeley, California, which introduced its ordinance last month, the fee is 25 cents.) That means that even after paying for Muuse — the company is transitioning to a $3-per-month subscription model — regular coffee drinkers will still save money.

Are these incentives enough to get Muuse to scale? Forecasting the spread of new business models is notoriously hard, not to mention putting a price on human behavior, but my instinct is that 25 cents isn’t enough to overcome the convenience barrier. I’ll be very happy to be proved wrong, and will track the trial with interest.

Two more quick points before I go. Carroll told me that the company is in the process of figuring out how many times its cups need to be reused in order to offset the environmental impact of manufacturing the cups in the first place. This is a crucial number because some studies show that cups need to be reused a surprisingly large number of times before they come out on top in terms of greenhouse gas emissions and other life-cycle metrics.

It’s also worth noting that Muuse is part of the NextGen Cup Challenge, a global competition to design and commercialize a more sustainable disposable cup. The 12 companies involved are pursuing several strategies with support from the organizers at the Center for the Circular Economy, as well as two industry heavyweights, Starbucks and McDonald’s. If Muuse’s solution doesn’t pan out, other parallel trials may still have a path to market.

In lobbyists vs. sustainability, the lobbyists are winning

These new services are like Consumer Reports, but for carbon offsets

Will my kids eat insects?

The California dairy with a net-zero ambition

See all by Jim Giles