Last week’s World Economic Forum in snowy Davos, Switzerland, brought a blizzard of proclamations about the disruptive impact of artificial intelligence, along with an avalanche of debate over its job-killing potential.

The good news for us humans is that the current generation of AI technologies being used to automate data collection and processing — such as machine-learning software that amasses more expertise as it analyzes data or neural networks modeled after the human brain — are more likely to augment the human workforce rather than replace it. At least for now.

Indeed, almost two-thirds of the business executives responding to a survey released last week by IT consulting firm Infosys (PDF) said they believed AI would "bring out the best in their organization’s people." The rise of AI, the Infosys poll respondents suggest, will place a premium on skills such as creativity and logical reasoning. Noted IBM chairwoman and CEO Ginni Rometty, in remarks Wednesday at Davos, said: "History has taught us many things. When you [have] powerful technologies, you have a responsibility that they're introduced in the right way." 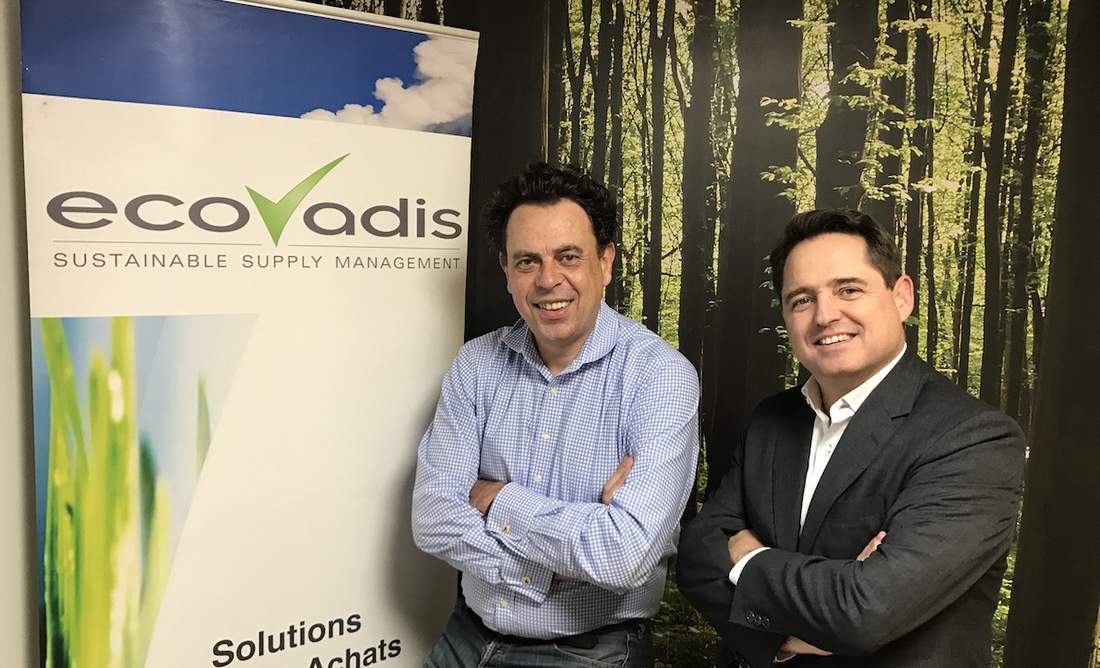 Consider this a wake-up call for sustainability executives and risk management professionals focused on collecting and interpreting environment, social and governance data about global supply chains: several prominent information services are investing seriously in artificial intelligence that promises to dramatically speed this process. In fact, AI is such an important priority that one of these firms, France’s EcoVadis, just signed its first outside funding — for about $32 million from institutional investor Partech Ventures — and specifically mentioned this area as a motivation for the arrangement.

"This pivotal investment will empower our team to accelerate R&D and enhance our proprietary technology with the latest innovations in machine learning and natural language processing while broadening our expertise in CSR analysis to foster environmental, social and ethical performance at a global scale," said EcoVadis co-CEO Frederic Trinel, in a statement.

EcoVadis was founded 10 years ago to help organizations with vast, distributed supply chains create scorecards for their business partners examining anything from water consumption and energy efficiency to workplace conditions or policies for handling toxic chemicals.

The software company works with more than 150 massive companies such as food and beverage firms Nestle and Heineken, pharmaceutical concerns GSK and Johnson & Johnson, and chemicals maker BASF — by keeping tabs on data contributed by more than 30,000 of their suppliers.

Most organizations use the EcoVadis database for compliance reasons to mitigate the risks of dealing with certain suppliers, EcoVadis co-founder and co-CEO Pierre-Francoise Thaler told GreenBiz. Others consider it a yardstick for evaluating existing or assessing new relationships in which they are considering investments. Finally, a smaller but growing number of innovators such as cosmetics company L’Oreal and consumer products giant Unilever are gleaning the EcoVadis database for examples of innovation that they might be able to leverage more deeply in their own business models. One example would be the successful use of advanced, more sustainable materials, Thaler said, adding: "It’s a small fraction of our leaders," he said. 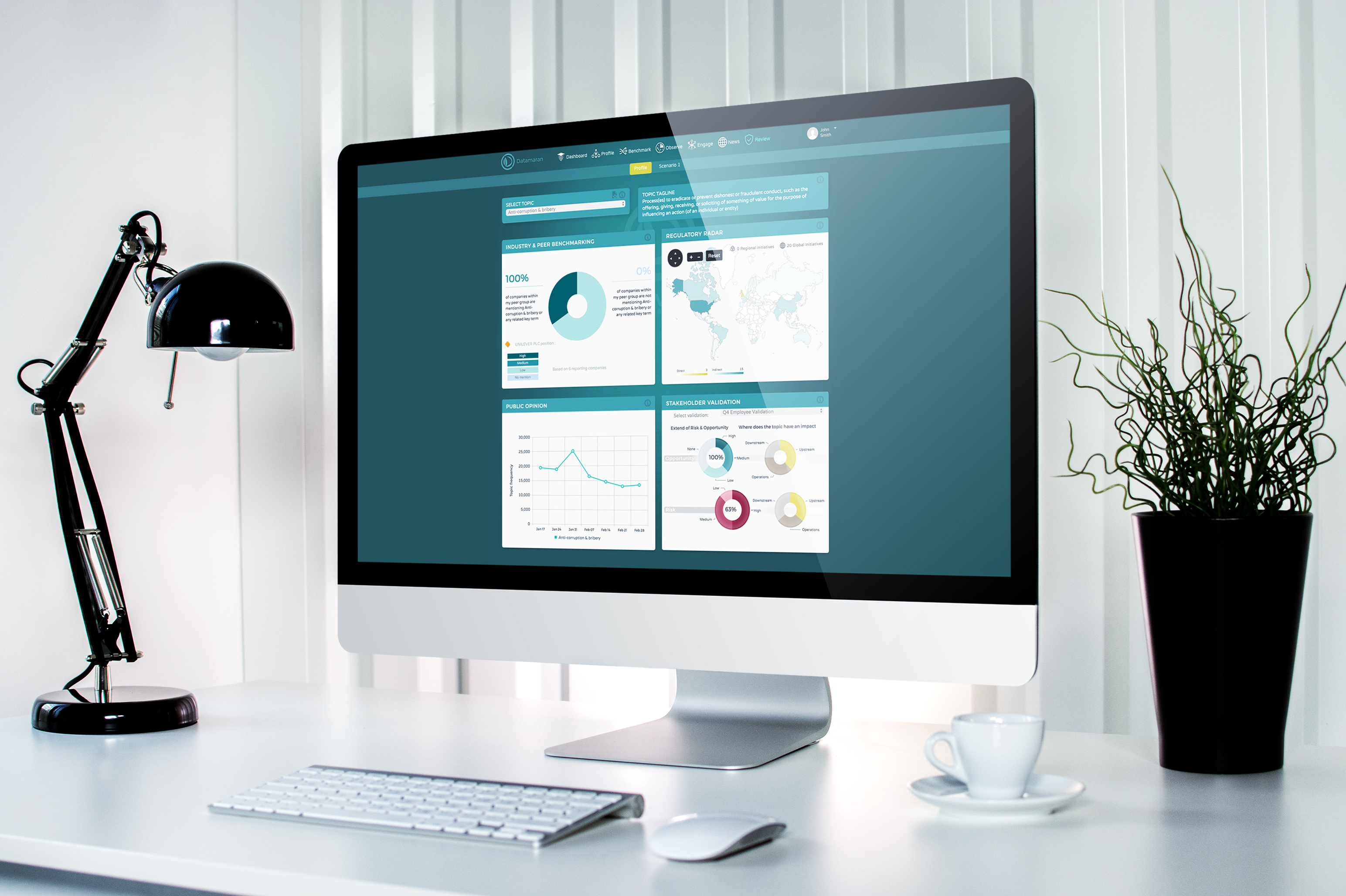 A top priority for the AI investments that will be fueled by EcoVadis’ new backing is offering methods for automating the analysis of the "millions of pages of documents" collected annually, according to Thaler, especially as the service expects to double the number of companies submitting reports over the next 12 months. Right now, this process is handled largely on a manual basis. Using machine learning software to sort this "unstructured information" for certain emerging themes, in more than 20 languages, will be critical as EcoVadis scales, Thaler said.

It's human plus machine

Artificial intelligence — especially natural language processing — is already central to managing the information curated by another rising supply chain analytics company, eRevalue, headquartered in both New York and London. The service was created to upend the highly manual and subjective process of scanning corporate sustainability reports, regulatory information, investor filings, news media and declarations by non-government organizations. It currently covers seven years of reporting data for more than 7,000 companies, said eRevalue co-founder and CEO Marjella Alma. (You can check out a one-day trial of its entry-level product Caspian here.) The information is updated twice daily.

"We really analyze the external landscapes, what is emerging, what is coming up, what is becoming the norm based on your industry," she said.

The software can compress a search — such as information about biodiversity or human rights issues in given regions — that might typically take up to a month using traditional tools into an afternoon, according to Alma. That gives eRevalue’s human experts more time to consider findings against other information know about a company, such as its stated policies or commitments in those areas. Their interpretations and finding are fed back into the machine learning software, so that the system continues to become "smarter" over time. "AI quite often involves humans," she noted.

One example of a concept recently added to the eRevalue database: digital inequality.

As is the case for EcoVadis, the job titles for those buying data from eRevalue range from sustainability professionals to risk managers to lawyers. Its customers include giant commercial real estate investment trust CBRE and consulting firm Crowe Horwath. About half of the software company’s clients are based in North America.

From automation to innovation

Another organization that is optimistic about the potential benefits of artificial intelligence is RepRisk, a Swiss provider of ESG business intelligence covering more than 70,000 companies, which got its start as a service primarily for banks and insurance providers such Allianz, Citi and Swiss Re. Over the past 10 years, the company has grown beyond that initial focus to serve more than 150 companies including BASF, Colgate-Palmolive and Roche. Its service captures and curates information about everything from pollution metrics to labor issues to deforestation — basically, anything that might be construed by a human as evidence of a company’s "real" standing when it comes to ESG risks. 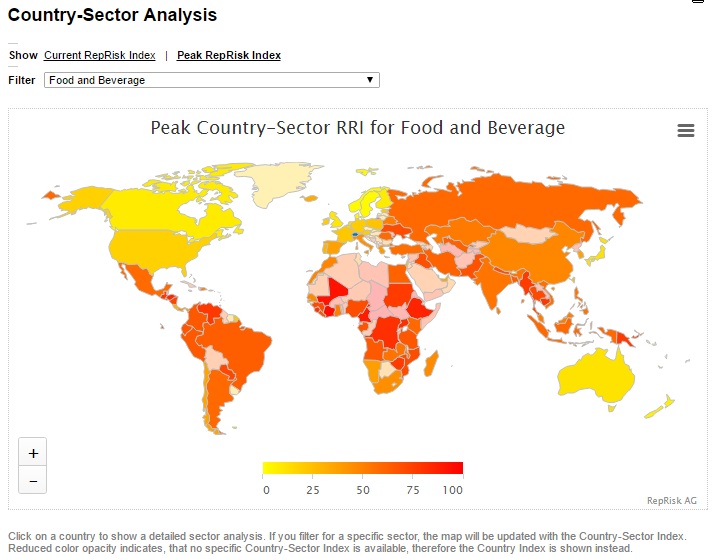 For now, RepRisk doesn’t interpret those findings, because what is viewed as a risk or as negative news by one country or company might be construed as an opportunity by another, said Philipp Aeby, CEO of the Zurich-based company. But RepRisk’s human teams regularly validate the software’s findings, so that that its algorithms continuously are refined.

Aeby said that sustainability professionals and risk managers are best-served when they consider both reports and information that they have explicitly collected, and validated, alongside data gathered by independent, third-party sources.

"There’s huge potential for open source intelligence, for artificial intelligence in supply chain risk management," he said. "This will play out over the next five years."

It probably won’t surprise you to hear that well-known enterprise software purveyor SAP, one of the biggest sellers of software for managing back offices and supply chains, is also investing in artificial intelligence as a means of surfacing more information for its customers. The German company is adding supplier data related to social and environment issues to its SAP Ariba service, which many companies use to manage transactions and contracts across their business partner networks. The service is called SAP Ariba Supplier Risk.

"We want to gather more information for them before they find themselves on the front page," said Padmini Ranganathan, vice president of products and innovation at SAP Ariba.

Ranganathan cited the example of a company that decided to heighten its commitment to sustainably sourced materials in its furniture, but that had a limited view into which of its current suppliers might be at odds with that strategy. It used the SAP system to identify regions that might present an issue, which allowed it to focus its additional research more specifically.

Part of the impetus is globalization, as midsize companies don’t always have a local office near their supply chain partners. The Supplier Risk service seeks to get around that, by gleaning information from publicly available sources or by considering data collected through monitoring technologies, such as sensors or aerial imagery databases.

Either way, it provides insight that otherwise might not be readily available. "You no longer need to send a helicopter to determine the status," Ranganathan said.