A deep-dive into the numbers behind labor and renewable energy.

Nothing on Earth moves without energy, and most of the energy that people use is of the fossil variety: coal; oil; and natural gas.

Although renewable energy is beginning to make inroads, fossil fuels still account for 78 percent of global final energy consumption as of 2014, according to REN21’s Global Status Report 2016 (PDF). It is abundantly clear that a fundamental energy makeover is needed if we are to avoid climate chaos — especially with regard to coal, the dirtiest fuel of them all. Until recently, global coal production and use were still growing (PDF).

Advocates for renewable energy are typically consumed with matters such as technology development, cost competitiveness and policy support for deploying solar, wind and other renewables. But the social dimension of the energy transition is just as crucial: In moving away from polluting sources of energy, we need to make sure that the workers who for decades have dug up coal aren’t left in the lurch. These are the people who have often paid with their health so that the rest of us could power air conditioners, refrigerators, TVs and gadgets galore.

Even before the world decided to get serious about climate policy, not all was well in the world of coal. Communities dependent on coal extraction have been suffering from falling employment for many years, often even as production was rising. This loss of jobs was not the consequence of environmental actions or of a supposed "war on coal" waged by the Obama administration, but the result of growing mechanization, industry restructuring, changing trade patterns and corporate consolidation.

Communities dependent on coal extraction have been suffering from falling employment for many years, often even as production was rising.

Since the 1970s, there has been an ongoing shift from eastern underground mines in Appalachia to heavily mechanized surface mining operations in Montana and Wyoming. Mines in the latter states can extract more than 10 times as much coal per worker-hour as mines in the Appalachian Basin can. Output from Western basins surpasses (PDF) that from the Eastern basins. Coal mining employment in Appalachia was cut in half between 1985 and 1997. Writing in the Harvard Business Review, Joshua Pearce noted, "as coal investors have fled in droves to invest in more profitable companies and industries, [Appalachian] coal workers have been left with pink slips and mortgages on houses with few buyers in blighted coal country."

In the decade to 2014, coal’s share of U.S. electricity production fell from just under half to about 39 percent.

In the decade to 2014, coal’s share of U.S. electricity production fell (PDF) from just under half to about 39 percent, and more capacity is being retired. This is the result of a number of factors. Coal is under increasing pressure from cheap supplies of natural gas due to the fracking boom and now also from rising supplies of wind and solar electricity.

More stringent environmental rules for aging coal plants — almost three-quarters of U.S. coal plants in operation today were built from the 1940s to the 1970s — also play a role. Climate policy is just beginning to make itself felt. These changes reduce coal demand and thus employment at both mines and coal-burning power plants (which, by a rough estimate, represent 59,000 jobs or so at present). In addition to old plants being shut down, End Coal’s Global Coal Plant Tracker lists the cancellation of 41 planned new plants with a combined capacity of about 26 gigawatts (GW).

The impact of the Clean Power Plan

Through the Clean Power Plan (CPP), the Obama administration seeks to reduce U.S. power plant emissions to 32 percent below 2005 levels by 2030. (The plan was announced in August 2015, but in February, the Supreme Court stayed implementation pending judicial review.) Each state has been assigned a target for cuts and needs to submit its plans for doing so to the U.S. Environmental Protection Agency (EPA) no later than 2018. Even before the CPP was proposed, coal had dropped from being the leading source of power generation in 32 states in 2000 to dominating in only 20 states in 2015.

In an analysis for the Energy Information Administration, Laura Martin and Jeffrey Jones project that coal plant retirements during 2015–20 as a result of CPP actions may reach 61.6 GW (of a total of 326 GW in operation in 2014), with 30.4 GW in the 2020s and 7.5 GW in the 2030s. The CPP thus will accelerate the ongoing decline of coal’s share in the electricity mix.

The EPA analyzed (PDF) job impacts under the CPP relative to the likely employment situation in 2020, 2025 and 2030 without the CPP. It concluded that, all in all, job impacts would be positive, in part because clean energy investments are more labor-intensive than fossil fuel investments. Josh Bivens of the Economic Policy Institute expects the largest job gains to come in energy efficiency, although the construction of new natural gas and renewable energy plants also will create substantial jobs. Including indirect effects (supplier and re-spending jobs), by 2020 there could be a net gain of about 360,000 jobs, although this will taper in later years. This doesn’t mean that all is well, however: job losses are expected to be geographically concentrated, and few of the workers that will be displaced have a college degree.

Job losses are expected to be geographically concentrated, and few of the workers that will be displaced have a college degree.

A fair transition for workers?

In 2015, the Obama administration initiated the Partnerships for Opportunity and Workforce and Economic Revitalization (POWER) Plus Plan (PDF). Under the proposed FY2017 budget, the POWER+ Plan provides $75 million for economic and workforce development strategies in areas affected by changes in the coal economy. This includes $20 million to support dislocated workers (through the Department of Labor), $50 million to communities (through the Appalachian Regional Commission) and $5 million to communities (through the EPA’s Brownfields Program).

The plan also seeks to strengthen the health care and pension plans of more than 100,000 retired coal miners and their families. The proposed budget further includes $200 million annually over five years for reclamation of abandoned mine lands, linked to job creation strategies. However, in a nod to the coal industry, the POWER+ Plan places a particularly large bet ($2 billion over five years in investment tax credits) on carbon capture and sequestration projects: an expensive boondoggle that would prolong coal use.

Speeding the necessary phase-out of coal use in light of the climate crisis, and taking care of affected workers, will require thinking big.

Speeding the necessary phase-out of coal use in light of the climate crisis, and taking care of affected workers, will require thinking big. Some audacious proposals have been floated for the U.S. government to simply buy out the entire coal mining industry, shut it down over a number of years and develop a program with transition payments, relocation assistance and job-training for workers losing their jobs.

For coal miners nearing retirement age, a transition plan could make support payments available until they are eligible to receive their pensions. This is what Germany has done to help thousands of laid-off older coal miners. But younger workers will need — and presumably want — to find new careers. One alternative for displaced coal miners is found in the growing renewable energy sector: specifically, the solar and wind industries.

In a recent study, Edward Louie and Joshua Pearce argue (PDF) that solar energy growth can, in principle, absorb all U.S. coal workers who will be laid off during the next 15 years. Their study examined occupational patterns, skill sets and salaries in both industries and found many sufficiently equivalent positions. Following retraining, technical-level workers could expect to earn more in the solar industry than they earned previously in the coal sector, although managers and executives likely would earn less.

To make the switch, education and retraining are essential.

To make the switch, education and retraining are essential. In many cases, short courses or on-the-job training might suffice. But individuals seeking engineering and other demanding technical positions probably will need to pursue a multi-year college degree, at considerable cost.

For affected individuals, the cost of retraining could well be significant and, for some, could present an insurmountable financial burden. Under a "fair" transition plan, state or federal governments would establish public retraining programs. (Given the massive subsidies that the coal industry has received over the years, Louie and Pearce suggest that companies should be required to finance a retraining fund — possibly patterned after the 1977 Surface Mining Control and Reclamation Act, which mandates that companies pay into a federal fund for reclamation of abandoned mine land). Nationwide, retraining costs could range from $181 million to $1.9 billion.

Solar and wind employment is growing

Solar installations are on a steady growth trajectory, which so far has translated into close to 209,000 jobs in the United States, according to the National Solar Jobs Census. (See Figure 2.) Solar manufacturing jobs largely have stagnated around 30,000 because a substantial share of panel manufacturing takes place abroad (with China being a leading supplier). Most U.S solar jobs, about 120,000, are installations-related, with 27,000 more in sales and distribution, 26,000 in project development and about 12,000 in research, government and other occupations. 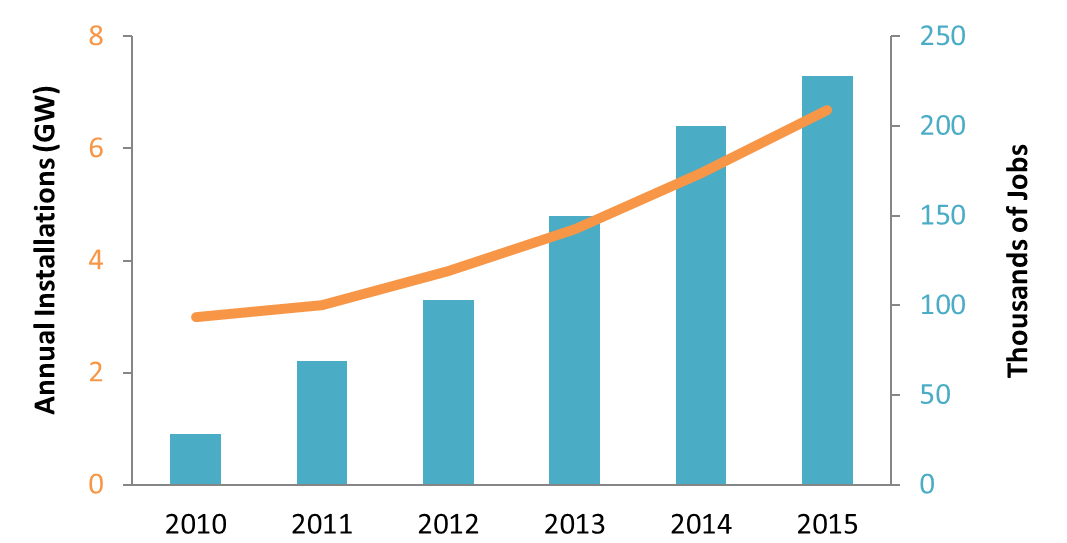 The wind industry is longer-established than the solar industry, but it has confronted tremendous swings. Over the years, Congress repeatedly failed to agree on a timely extension of the Production Tax Credit (PTC), the prime support mechanism for wind. This resulted in a rollercoaster for wind capacity additions and employment. (See Figure 3.) In 2013, for example, a 92 percent decline in new installations led to a temporary loss (PDF) of 30,000 jobs. The current multi-year extension of the PTC to January 2020 permits a steadier path in the next few years. 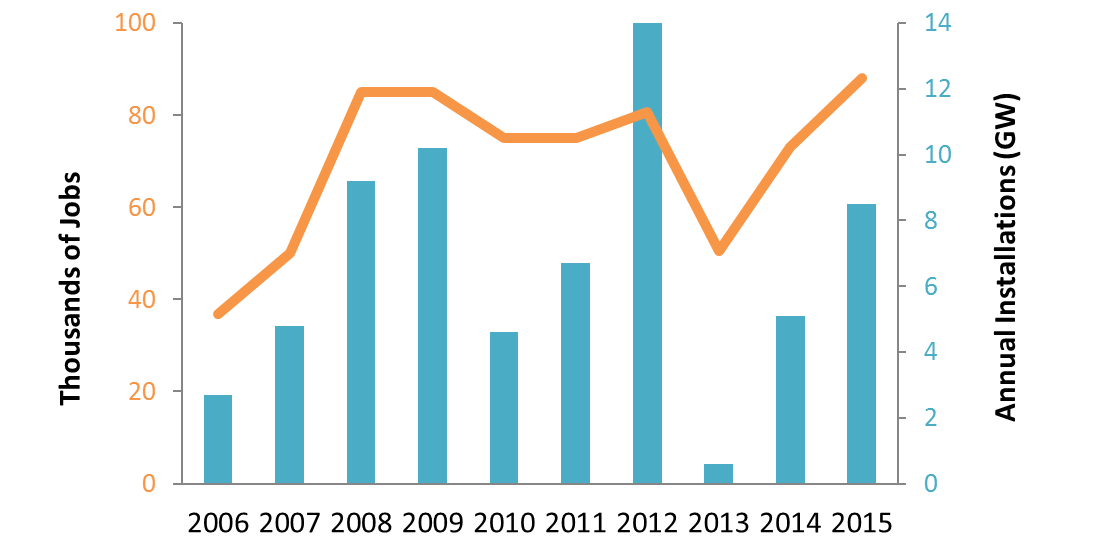 The expansion of wind and solar jobs is good news, but there is a reason why out-of-work coal miners aren’t necessarily cheering. So far, the bulk of these new jobs are not created in coal country but in other parts of the United States. Reasons for this include varying resource endowments, as well as differences in how strong or weak each state’s research, scientific and industrial base is. A long history of dependence on a coal-based energy system also leaves its signature: "Historically, coal-producing areas have had cheaper power prices and therefore less of a solar market," pointed out Richard Lawrence, executive director of the North American Board of Certified Energy Professionals.

The map below shows the diverging geography of energy employment, focusing on the top 10 states each in coal, solar and wind employment. The states with the most coal jobs (PDF) are West Virginia and Kentucky, followed by Pennsylvania, Wyoming, Illinois, Indiana, Alabama, Virginia, Ohio and Texas. But the most solar jobs are found in California (by far), and in Massachusetts, Nevada, New York, New Jersey, Texas, Arizona, Florida, North Carolina and Colorado. Wind jobs are predominantly in Texas, as well as in Oklahoma, Colorado, Iowa, Kansas, Illinois, California, Minnesota, North Dakota and Florida. California, Colorado and Florida are among the top 10 employers in both solar and wind.

Texas is the only state that is among the top 10 in coal, solar and wind employment; and Illinois is among the leaders in coal and wind, but not solar. They are thus the only coal states that also have strong employment in clean energy. 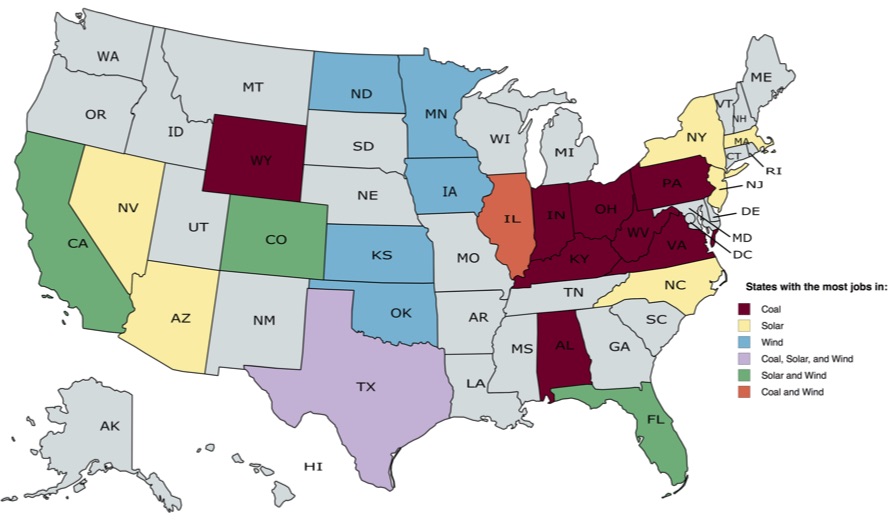 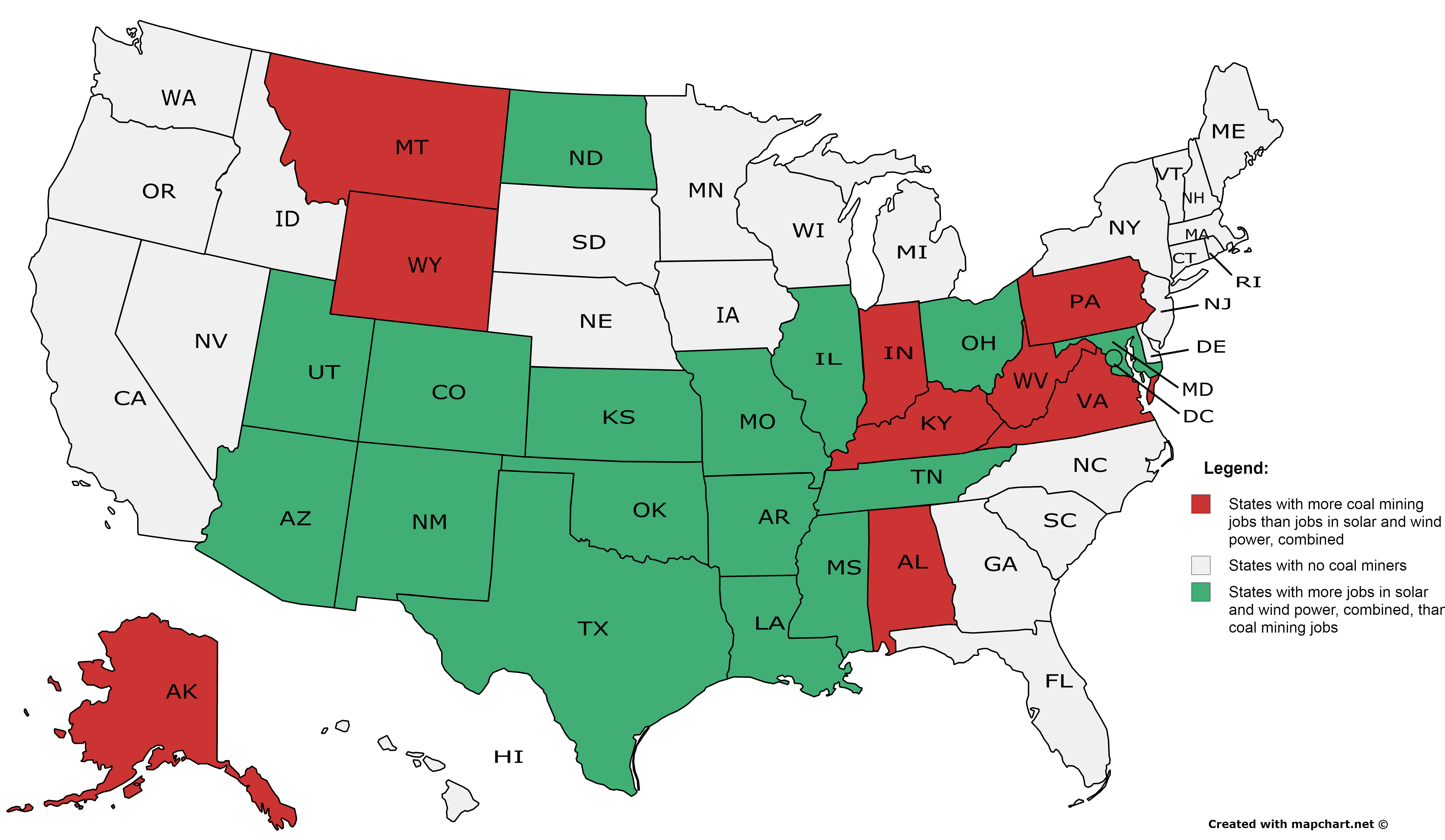 This, of course, is only a snapshot of the current situation and is hardly unalterable. In fact, it is the job of policymakers to bring about an economy that stops destroying the planet’s life-support systems and makes these changes work for people. Federal and state policies can guide, nudge and encourage a transition toward cleaner energy in parts of the country that long have depended on coal. This can be done with the help of incentives and mandates that build demand for clean energy; strategies to promote regional economic development; and programs to support education and training as needed.

Federal and state policies can guide, nudge and encourage a transition toward cleaner energy.

See all by Michael Renner