Cities and business long have had a symbiotic relationship. One provides purpose and place, the other brings people. Not sure which is which in the preceding sentence? That’s the point.

My colleagues and I have been spending a lot of time the past few years looking at the relationship between these two institutions when it comes to sustainability and resilience. In fact, my exploration into this topic goes back more than 20 years. On the second page of “Beyond the Bottom Line,” my 1994 book about corporate social responsibility, I quote Arnold Hiatt, the retired chairman of Stride Rite Corporation: “You can’t run a healthy company in an unhealthy community for long,” he said.

He might have added that a healthy community isn’t possible without a prospering private sector.

The city-business symbiosis was brought to light again last week with the publication of “Citystates II: The Case for Corporate Leadership in Urban Sustainability,” the sequel to a 2012 report, “Citystates: How Cities are Vital to the Future of Sustainability.” Both were produced by the hybrid think tank and consultancy SustainAbility.

Like its predecessor, CityStates II examines the host of interrelated sustainability challenges faced by cities, but also the vast potential cities have “to lead, particularly by fostering the rapid development and dispersion of new ideas, technologies, behaviors and business models that will be fundamental to long-term sustainable development.”

As the first report put it: “Sustainability needs cities as much as cities need sustainability.”

The new report zeroes in on the role of business. It begins with the acknowledgment that “More companies are engaging and innovating for sustainability within and across cities, as are cities with companies. But the potential of such engagement has only begun to be understood, much less realized.”

In that regard, “Citystates II" picks up where the first report left off, burnishing the business case for sustainable cities, presenting a framework to help companies think about greater engagement, and offering a  “Corporate Urban Sustainability Progress (CUSP) Maturity Model,” a framework with actionable steps companies can take to better understand the opportunities and how to seize them.“ 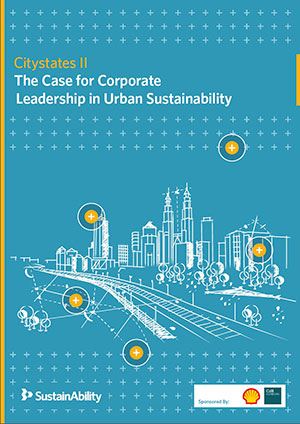 "We see sectors like energy, infrastructure, real estate, transportation, all quite engaged with cities,” Chris Guenther, one of the report’s co-authors, said at the report launch last week in San Francisco. “But we're really interested in how other industries like food, retail, consumer products — you name it — can find ways to accelerate their own sustainability ambition and agendas in cities and with cities.”

In their research, Guenther and co-author Mohammed Al-Shawaf “heard that companies tend to be narrow and short-term in their interest in cities,” said Guenther. So, they wondered, “How do we make it a more expansive conversation that involves longer time horizons and bigger initiatives? How do we find a vocabulary and a framework that allows us to understand, ‘Hey, you're working in the city; we're working in the city. How do we coordinate our efforts?’ It’s really getting at the idea of systems change and systemic impact.”

On the CUSP of maturity

The CUSP Maturity Model is the authors’ attempt to help companies engage more deeply. The framework, they say, “can be applied by any company that is interested in evaluating its readiness to engage on the urban sustainability agenda and understanding, at least at a high level, what commitment, ability and activities are necessary in order to progress.”

The CUSP model has five stages of maturity:

One key challenge in all this, as my colleagues and I learned last year at the VERGE City Summit we convened, is getting companies and cities speaking the same language — or at least using terms that are mutually understandable and relevant. Doing so is a prerequisite to creating the conditions for deeper, more substantive relationships. 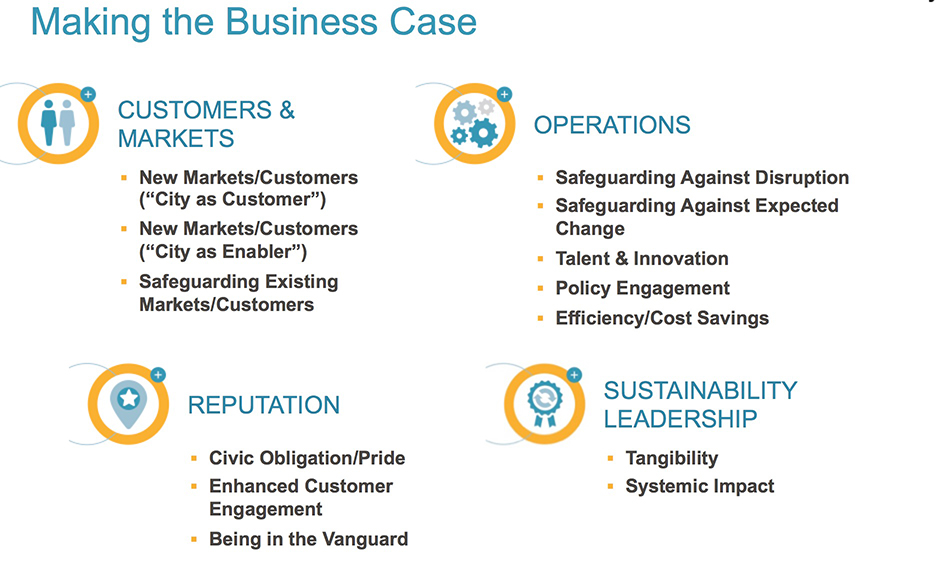 But it’s not just about language. “Citystates II” takes a realist’s approach, describing some of the other hurdles companies and cities must overcome to enable productive collaboration. There are misaligned interests and incentives, engagement mechanisms that create barriers in their efforts to avoid favoritism, performance outcomes that sometimes don’t live up to the hype, fragmentation of efforts across various city departments and — as in any bureaucracy — organizational silos that can bring any engagement to a screeching halt.

It’s not a comprehensive list. There are more lessons to be learned than even this report could uncover. (Here’s four more, gleaned from the 2014 City Summit.)

It all takes copious amounts of work — and time. As J. Ashley Nixon, NGO & stakeholder relations manager at Shell and a sponsor of “Citystates II,” put it, “This is really hard stuff. You have to have thick skin. If you want to get into something with meaning in cities you're getting into that innovation space where you get knocked back all the time.”

In other words, think like an innovator: jump in; rapidly iterate and revise; be stubbornly persistent; and be prepared to fail on the way to finding success. Rinse and repeat.

However challenging, it’s important work, worthy of the bumps and bruises both cities and companies inevitably get from trying to work together. The potential for economic, social and environmental benefits from effective collaborations is enormous — and not easily attainable by one party working without the other.

As “Citystates” co-author Al-Shawaf wrote in 2013, “The ‘urban century’ will be considered a positive sustainability catalyst only if cities and companies can understand, engage and leverage the best of each other to address resource shortages, social equity and a broad and diverse economic base collaboratively.”

This new guidebook is a good step forward for reaching those lofty goals.