Across the United States — from New England to California — a small but growing movement of farmers is foregoing traditional farm ownership in favor of a cooperative model. In Maine, four Somali Bantu refugees raise crops on shared land at New Roots Cooperative Farm, growing both regional and Somali produce. To the south in Vermont, Intervale Community Farm shares farm ownership with its community supported agriculture (CSA) members. Next door is Digger’s Mirth, a worker-owned farm. And across the country in Southern California’s Pauma Valley, Solidarity Farm shares work and resources with other stewards of the land.

Although these farms are run by people with diverse backgrounds, beliefs and motivations, they all seek to rebuild what’s been lost over the past century: a connection with neighbors — whether personal, economic or both — and a sense of the mutual support that keeps rural communities alive. 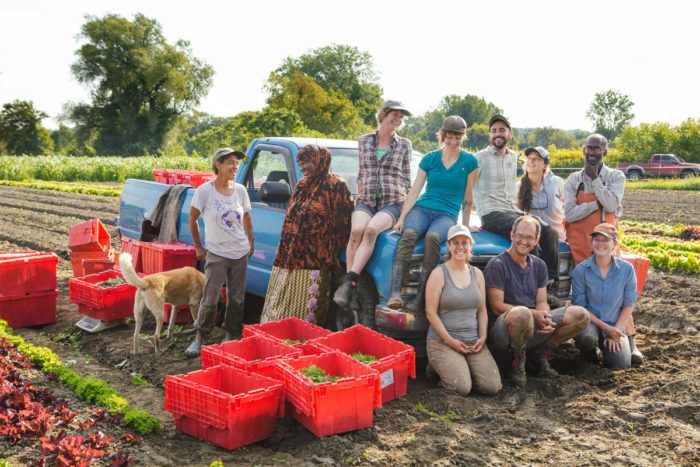 In the 19th and early 20th centuries, this connection generally was established through a community’s general store. Farmers gathered there to repair their tools and swap news. Men and women traveled into town from their farms, bringing eggs, butter and produce to sell. The general store was the nucleus of rural life and an early model of the consumer cooperative. In 1920, 2,600 consumer co-ops — most of which were general stores — met locals’ needs, forged social bonds and fostered community resilience.

Although the general store has been largely been erased from the U.S. landscape, the cooperative tradition remains in other aspects of American life, from credit unions to food co-ops to farms. Civil Eats spoke to farmers from four row-crop farm co-ops about the benefits, obstacles and future of cooperative farming.

'We operate the farm to benefit the members'

Farmer co-ops — which range from small to very large — have been around for nearly as long as people have been farming. But as worker-owned businesses undergo a revival, community-scale farmers are also turning to cooperative, more collaborative farming models.

Farming lends itself to multiple cooperative models. Agricultural cooperatives, such as Organic Valley, are groups of individual farms that have come together to meet common needs, from inputs such as seeds and fertilizer to services such as distribution and marketing. Then there’s the consumer cooperative, in which customers (such as CSA members) own and govern the farm. Worker cooperatives — a fairly new development in agriculture — refer to worker-owned farms. 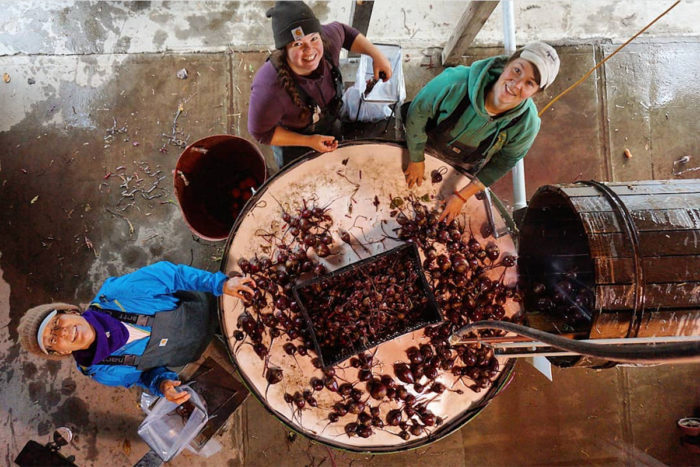 In particular, the worker cooperative model is a natural fit for farming. Beginning farmers need land, start-up capital, labor and diverse skills to launch a business. In a cooperative, farmers can pool financial resources and strengths, thus spreading out costs and drawing from a range of work experience. This means more adaptability and resiliency — two things any farmer will tell you are essential.

Mai Nguyen supported new cooperatives for years at the California Center for Cooperative Development. Now the California organizer of the National Young Farmers Coalition (and a farmer of heirloom grains), Nguyen sees a growing trend toward cooperation in agriculture. "Like any other form of social relationship, cooperation is easily forgotten because it’s not commodified," said Nguyen. "There aren’t many well-established models of farms run by worker cooperatives — but that’s changing." Through involvement in the co-op sector, Nguyen advises cooperative farms in California, including the collaboratively minded Solidarity Farm.

While new farmers might be wary of sharing management with customers or co-owners, farms can function collectively with great long-term success. Take those two neighboring farms in Vermont, Intervale Community Farm and Diggers’ Mirth Collective Farm.

Like a credit union or outdoor goods store REI, Intervale Community Farm is a member-owned venture. Ninety percent of the farm’s business comes from its CSA program, and, like a consumer cooperative, CSA members can buy in as co-owners. "It was a pretty natural pairing to think of this as our enterprise, collectively," said Andy Jones, the farm’s manager. "Consumer cooperatives were created to benefit the people who are patronizing them. We don’t run the farm in order to make a profit or because it’s a charitable enterprise; we operate the farm in order to benefit the members."

This focus on service over profit gives the 30-year-old farm literal and emotional buy-in from community members. Intervale’s CSA serves around 600 households in the summertime; of these customers, 340 are co-op members and partial owners of the farm. This makes them "totally committed to the farm, in part because the farm is totally committed to them," Jones said. Because of this collaborative ownership, Intervale calls on its members for decision-making and support, from raising funds for new greenhouses to sticking with the farm through difficult seasons. When Hurricane Irene devastated the Northeast, "we lost all of our crops, and yet we had a ton of community support," Jones said. Because Intervale had fostered a cooperative identity, CSA members stayed with the farm through its season of shortage. 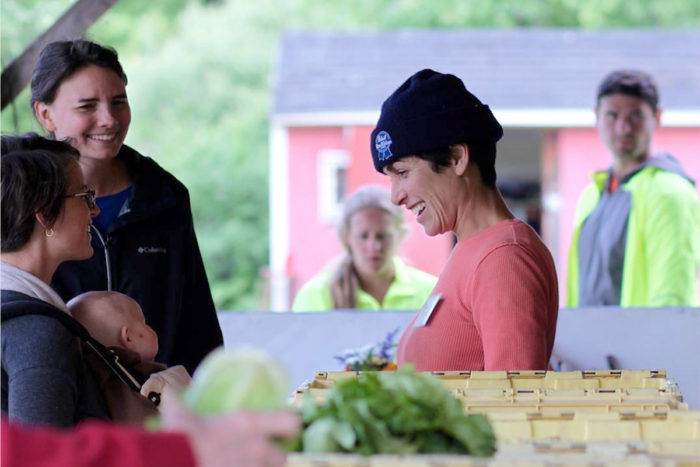 That same year, Diggers’ Mirth Collective Farm next door also suffered; the farmers managed to earn a small profit — enough to net each farmer the equivalent of $5 an hour. It wasn’t much, but had the farm been structured in a typical hierarchy, the owner already would have paid out the labor and been left to bear the losses alone. "In our case, as bad as it was, no one was in debt," said Dylan Zeitlyn, a founder of the worker-owned farm. "We were more resilient because of [our model] — it could have bankrupted somebody."

Like Intervale’s decision to share ownership with CSA members, choosing to share ownership among workers was a natural choice for Diggers’ Mirth. When the farm started in 1992, the original worker-owners already were involved in other cooperatives, from a collectively run political group to collectively run households. "We had a philosophical alignment with non-hierarchical structures," said Zeitlyn. "[We felt] the people doing the work should be in charge, and should reap the rewards or failures as the case may be, in an equal way."

As all farmers know, those failures will come. Several days before I spoke to Ellee Igoe, co-owner of Solidarity Farm outside San Diego, the farm had suffered through its hottest day yet. Temperatures peaked at 121 degrees and Solidarity lost 70 percent of its chickens and 30 percent of its crops.

In the face of challenges such as these, Igoe and her husband, Hernan Cavasos, continually ask themselves, "How do we adapt and become resilient?" 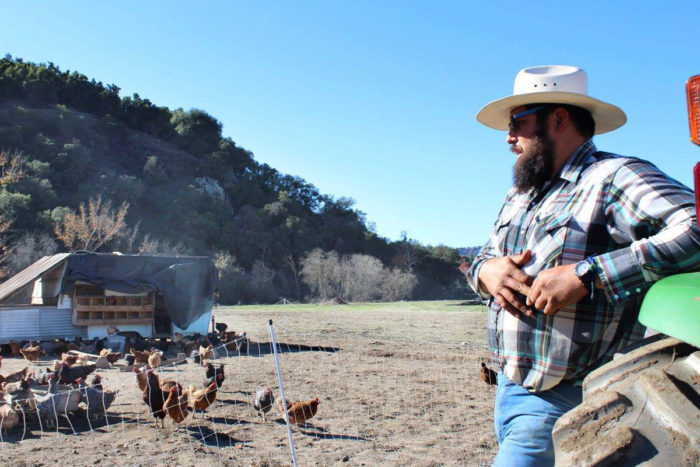 Part of the way they’ve built resilience is through fostering a collaborative spirit on the farm. Solidarity began as a worker-owned farm, although its owners didn’t go through the complicated process to achieve legal recognition. Instead, Igoe and Casavos shared ownership with two friends. When health issues and tuition payments forced their co-owners to take a step back, Igoe and Casavos decided to continue operating collaboratively, albeit without shared business ownership.

As Igoe sees it, all farmers would benefit from adopting a cooperative model, sharing resources and responsibilities with other like-minded food producers. For their part, Solidarity rents land from the Pauma Band of Luiseño Indians, who are also farmers, and works with the tribe to steward Native land. They’ve invited other tenants to share this stewardship; today Solidarity operates alongside growers of sunflowers, apples, sprouts and indigenous cover crop seeds. Igoe, Cavasos and the other tenants share chores such as watering and making deliveries, as well as resources from tractors to water.

'We say no to each other a lot'

While cooperative proponents believe they create more resilient farms, the model also can slow innovation. "There’s a conservativeness to the collective, as far as change," said Zeitlyn. "There’ve been times when it’s felt like we say no to each other a lot."

New Roots Cooperative Farm in Southern Maine struggles with this resistance to change. With multiple farmers come multiple opinions, for better or worse. "A challenge is the time it takes sometimes to reach decisions," said Jonah Fertig-Burd, director of Cooperative Food Systems at the Cooperative Development Institute. (Because New Roots’ farmers — Seynab Ali, Batula Ismail, Mohamed Abukar and Jabril Abdi — were busy with harvest and don’t speak fluent English, we spoke to Fertig-Burd, who helped New Roots incorporate as an agricultural co-op.) 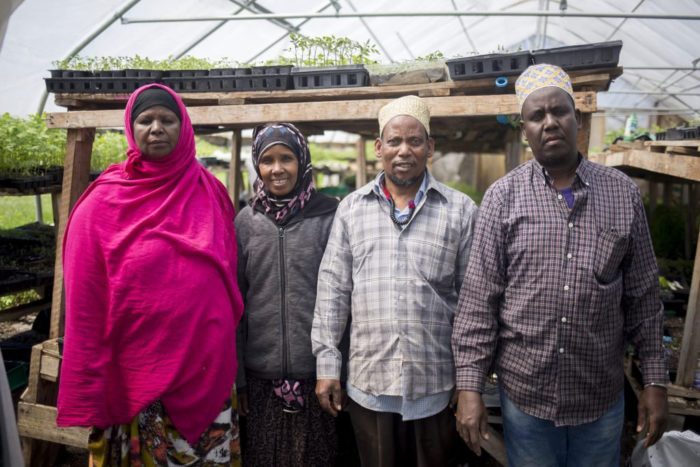 As refugees, the four Somali farmers face additional barriers to land, markets and support. But farming collectively — which they’ve done since 2006 — helps. "They are able to pool their resources and support one another in accessing the land, infrastructure, equipment, markets and capital," said Fertig-Burd. To date, the four farmers have raised over $100,000 to launch their farm.

A cooperative farm was a natural fit for Somali Bantu values, which emphasize equality. "In Somali Bantu culture, they have a practice [called] Iskashito farming," said Fertig-Burd. "Families work together on a larger plot of land to provide crops for wholesale markets. Somali Bantus also use Ayuto, a cooperative lending circle, to help families meet financial needs."

Jones of Intervale Community Farm is surprised that more CSA programs haven’t adopted a consumer cooperative model. "I think it’s partly because co-ops are unfamiliar in the U.S., which is not the case in Latin America, Europe, Japan and [elsewhere]."

Mai Nguyen agreed. "I find that [among] people who come from countries where co-ops were developed and supported by the government, they’re more likely to develop," Nguyen said. In their work with cooperatives, Nguyen has found that immigrant and refugee communities formed the most successful cooperatives.

‘Our strengths are combined’

Regardless whether a farm is structured as a worker cooperative, a consumer cooperative, an agricultural cooperative or simply functions collaboratively, cooperative models yield diverse ownership with a wider skill base. The single-owner model, Nguyen said, means relying on a "monoculture of the mind. ... We know it’s important to have polyculture in our seeds and farming system, and in turn we also need that in terms of who’s managing the farm."

As Zeitlyn put it, "Our strengths are combined and our shortcomings fall by the wayside." 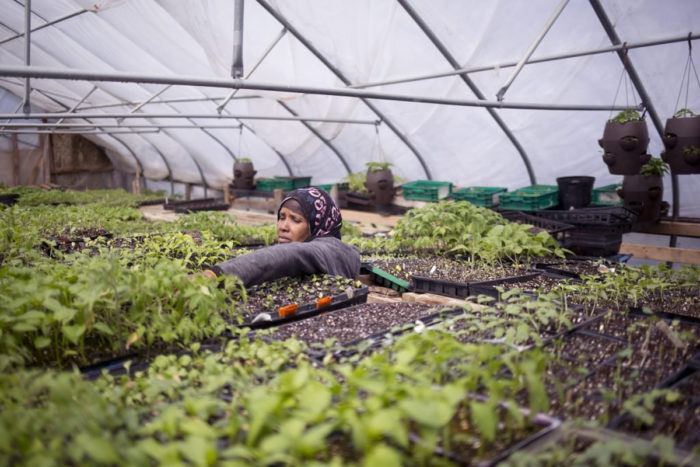 With a new generation preparing to grow food, the model could offer a solution to common impediments. "There’s an interest in farming, but a lot of this interest is coming from an intellectual perspective — from college-educated, middle-class young people," Nguyen said. "They don’t want to be paid the way farm workers have been paid."

Many don’t want to rely on undervalued, undercompensated labor either. The cooperative farm model gives young farmers control over both their business ethics and their salaries. Young, worker-owned farms continue to take root around the country, with Flying V Farm in Placerville, California, joining the ranks earlier this year.

Igoe is hopeful that these new cooperative models will draw more young and under-resourced farmers to the land. "Land stewardship needs to be redistributed," she said. "Maybe co-ops will be a model that can mature along with social change. Maybe this is the beginning of better conversations about equity." 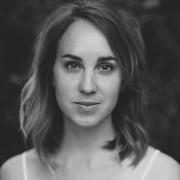 See all by Annalise Jolley